Learning through the eyes of sports broadcaster, Mr. Bruce Beck 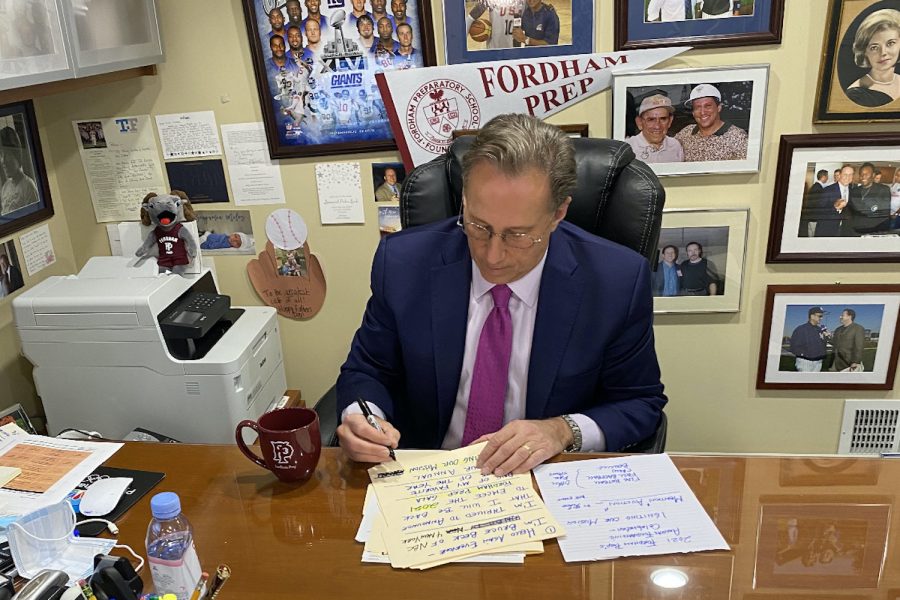 Bruce Beck, an accomplished sports broadcaster who currently works for WNBC-TV and News 4 New York, is a frequent visitor to Sacred Heart Greenwich. From speaking to the Sacred Heart Broadcast Journalism program to holding interviews with Sacred Heart students,  Beck generously shares what he has learned as a journalist.

Beck currently resides in Westchester, New York, with his wife Janet Beck and his two sons, Jonathan Beck and  Michael Beck, who are both married with children. Although it is difficult to balance a career with family life, Beck has learned how to manage time with his wife, his sons, and his grandchildren.

“It is not easy to balance a career with family, but I learned from my mother and father at an early age that family is more important than anything in the world,” Beck said. “I have family, and I have work, and I have to figure out a way to balance it.  Yes, a lot of times I am on the road, I work weekends, I work holidays.  It is hard, but being married for 40 years, raising two great sons, having two super daughters-in-law, and four grandchildren, I have worked really hard for that too, and I am really proud that they know how much I love them and how important they are to me.  It is a lot of sacrifice, but that is the key.”

Since a very young age, Beck has known that he wanted to be a sports broadcaster. He would constantly imitate broadcasters that he watched on TV, and was a broadcaster at his local sports games, especially at his high school, Livingston High School in Livingston, New Jersey.

“I think I was eight years old when I really knew I wanted to be a sports broadcaster,” Beck said. “I was in Livingston, New Jersey. As I was imitating Marv Albert as a kid, I knew what I wanted to do.  When my mom would go to bake in the kitchen I would say ‘Doris Beck makes a move, now she starts to spin the ladle, makes a great move to the first frosting,’ so I knew from an early age that I wanted to be a broadcaster.”

“I have covered a lot of different events over the years: Derek Jeter getting his 3000th hit, Michael Phelps getting his eighth gold medal in Beijing, Mariano Rivera’s last game, American Pharoah winning the first triple crown in 37 years,” Beck said. “But my favorite has to be witnessing New York Giants David Tyree’s famous helmet catch at Super Bowl 42.”

Beck is currently the lead sports anchor at News 4 New York where he has worked for 24 years, and is the host of NBC 4’s Sunday night sports show, Sports Final. Beck was also the host and sideline reporter for the York Giants pre-season football this past fall.

Before working for NBC, Beck was a staff broadcaster with the Madison Square Garden (MSG) Network from 1982 to 1994, where he hosted the station’s coverage of the New York Knicks, New York Rangers, and New York Yankees. From 2000 to 2008, Beck was a studio anchor for NBA-TV.

Beck has received many accolades and awards as a broadcaster during his career.  These include a 2011 New York Sports Emmy for his interview with former Rutgers football player Mr. Eric LeGrand, a 2006 New York Emmy for Outstanding Sports Anchor, and a 1999 New York Emmy Award for outstanding On-Camera Achievement in Sports Reporting.  The National Sports Media Association (NSMA) named Mr. Beck “New York State Sportscaster of the Year” nine times from 2007 to 2017, according to brucebecksportsbroadcastingcamp.com.

Beck has run a week-long sports broadcasting camp for the past 19 summers.  For the first 14 years, he directed the camp with Ian Eagle, an American sports announcer.  Since 2015, Beck and his wife have managed the camp from Iona College, located in New Rochelle, New York.  NBC New York considers this as one of the best sports broadcasting camps in the country as it teaches the fundamentals of broadcasting to students all around the world, according to nbcnewyork.com.  Since the 2020 camp was virtual due to COVID-19, students from around the globe were able to attend, including a student from Austin, Texas, and another from Shanghai, China.

“The whole purpose is to give these kids a chance to get some reps, to develop some skills, and to become a part of the next generation of sports broadcasters,” Beck said. “For me, it is a labor of love.  I really enjoy teaching, I really enjoy giving back. It is a business venture, but more than anything else, it is a special week of my summer where I get to watch kids improve and flourish, and it is a big part of what my life is. I love every minute of it.”

This past summer, Sacred Heart junior Kaitlyn Langer participated in the “Rookie Camp” virtually.  Kaitlyn was also able to interview Beck as part of a documentary for her broadcast journalism class at Sacred Heart.

“The camp introduced me to new aspects of broadcast journalism that I had never learned before,” Kaitlyn said. “I was able to meet new broadcast students that love the same things that I do in the broadcasting world.  I was also able to gain advice from Mr. Beck himself, who ran the camp with grace and patience. You can tell that Mr. Beck is extremely passionate about teaching young students what he loves to do, and all of the experiences he has had in his own field.”

Beck shared advice to young broadcasters who hope to be successful in the field of journalism.

“My three rules of thumb for being successful are attention to detail, preparation, and relationships,” Beck said. “If I have any advice for somebody out there who wants to go into broadcasting, it is that you have got to get reps.  You have to find a way to get experience: do it at your school, do it for your school paper, do it for a local television station.  Figure out a way to somehow get involved and get experience.  Don’t say no to anything, and try everything.  Grind away, and you will get an opportunity in this fascinating business.”

This story was originally published on King Street Chronicle on January 12, 2021.