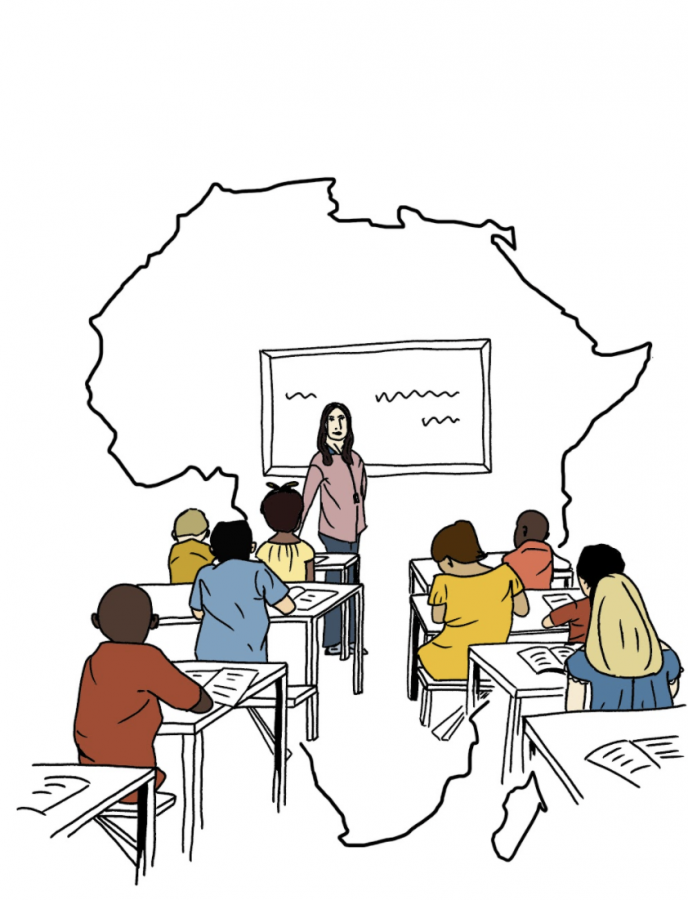 Students learn African history in front of an outline of the continent of Africa.

By Kira Ratan and Hanna Schiciano

The prospect of Masters introducing an African Studies course into its curriculum has been a topic of conversation for many students, dating back to 2015. Many feel they have only heard the Americanized version of African history: colonization, imperialism, slavery, and the civil rights movement of the 1960s. The school offers electives such as European History, US History, and American Studies. So, students have asked, where is the African Studies course?

Senior Kristie Sears expressed her frustration with the absence of a structured African history curriculum. Sears is in her fourth year at Masters, but has yet to see the administration begin to design such a course.

Sears said that implementing an African Studies course into the curriculum would be beneficial for so many students because most classes only address slavery and the civil rights era in America when discussing African history.

“It would tell a history that’s been forgotten,” she said.

The school’s administration has reasonable doubts regarding creating an African Studies course, including finding a teacher experienced enough to teach, and a possible lack of interest in the course, which has happened in the past with religion courses and Asian and Latin American courses that were developed but didn’t run due to low interest. According to an informal Tower survey, however, 74% of the 92 people who answered said they would be interested in taking an African Studies course at Masters if it was made available.

Associate Head of the Upper School Sara Thorn emphasized that while a lot of separate factors go into the actual development of a course, where course proposals are made by students or faculty and go to Academic Committee for approval, an African Studies course wouldn’t detract from the school’s current program of studies.

“There is definitely a place in the current curriculum for a course like that,” Thorn said.

There are a few teachers who have already begun to integrate pre-slavery African history beyond the lens of the American perspective into their respective courses, usually in response to requests from students.

Upper School History teacher Brendon Barrios first developed a unit on African narratives for his International Relations class five years ago, after one of his students, Kintashe Mainsah ‘17, mentioned that she had not once learned about Africa or its history in the course.

“There is a real lack of understanding and historical knowledge about Africa,” Barrios said.

Now, Barrios asks his International Relations class each year which global viewpoint they feel they haven’t seen. This year’s class is looking at media literacy in relation to African history and modern-day Africa.

“I would argue that this unit is probably one of the most eye opening units, with how unfamiliar the [students] actually are with Africa outside of the context of slavery. Most of them have no knowledge of it whatsoever,” Barrios said.

Senior Shamira Guillaume, a student in Barrios’ International Relations class this year, said that she learned a lot during the African narratives unit, including reading a book based on the traditions and lifestyles of the Igbo people, a tribe located in southeastern Nigeria.

“I think [the book is] really different from what we usually learn in school about African culture,” Guillaume said.

Sears said that it is important for Masters to teach history through a global lens, rather than focusing on just a few perspectives.

“We have had students from Africa come here and what do they see? The Eurocentric, white version of [African] history,” Sears said.

Sophomore Ian Stein agreed that in order to tell a story, multiple viewpoints are required.

“[History] is not from one person’s perspective. The authentic story comes from what you have to say, what I have to say and what someone else has to say,” he said.

Guillaume, too, believes a full African Studies course would provide important insight that students may not get elsewhere during high school.

“It will allow Masters students to have a more well rounded point of view,” she said.

While conversations about courses like these have come up more often recently, in light of the @blackattms Instagram account highlighting underlying issues of racism and prejudice at Masters, this is a course offering that students have been pushing for years.

Masters alumna Nana Yaa Asante ‘19 cited initiatives like the @blackattms account as possible jumpstarters for curriculum expansion. During her time at Masters, Asante didn’t have any exposure to African history or culture. As an international student from Ghana, she just thought that was the case for all “American schools.” Currently a sophomore in college, she sees the importance of offering high school students an opportunity to learn about new cultures.

“A lot of people describe America as this melting pot of cultures, so it’s hard not to learn about one’s [history] without bringing in another,” Asante said.

At Masters, Asante and another international student from Africa started a club called “Students of Africa” to share African culture with the community. As an African and a member of the Masters community, she believes anyone would be able to take something away from this type of course.

“[There are] so many stereotypes about Africa as a continent, so by hearing about the [real history] and cultures, there’s no way you won’t learn something from this class,” she said.

This story was originally published on Tower on January 19, 2021.