Students take to TikTok as an escape from online learning, with mixed effects 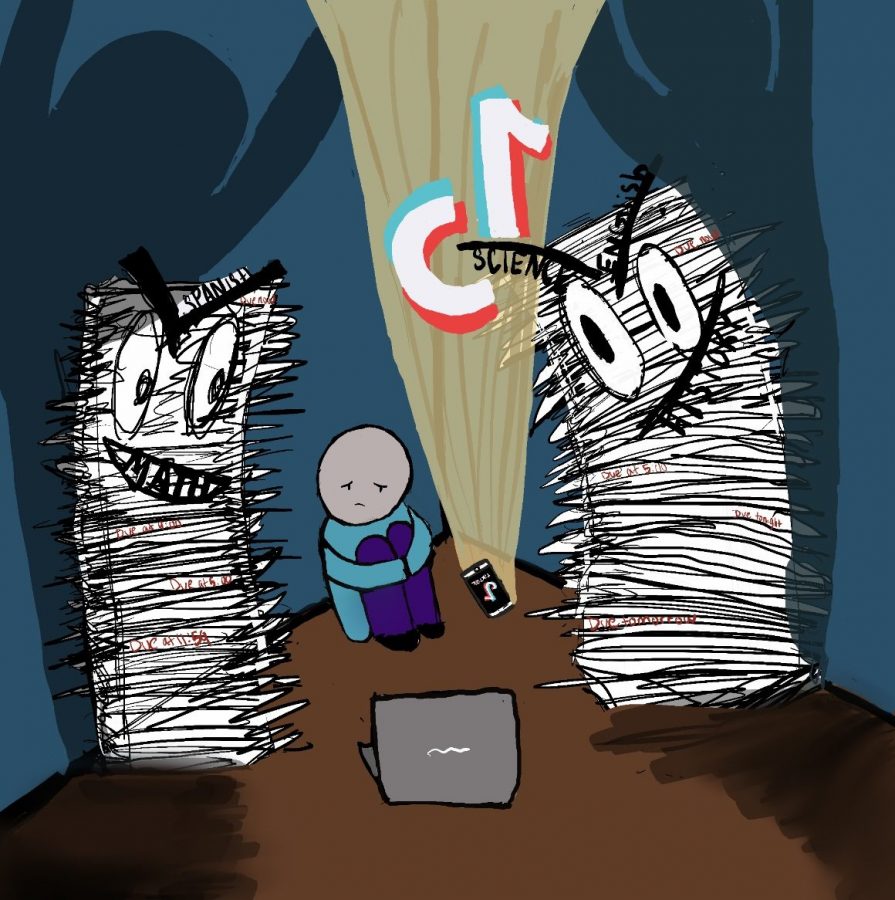 Students are often overwhelmed with the towering piles of homework. turning towards TikTok for a refreshing feeling of happiness.

Let’s be real, 2020 was tough on all of us. The introduction to the new decade has thrown obstacles nobody could have foreseen. Entering the new decade with high hopes were then quickly diminished with ongoing events throughout the world. But through that darkness, a light emerged from the tiny screens of our phones.

While parents have expressed their concerns about online distance learning, the pandemic’s existing mental toll is undeniable. Students across the country have experienced a wide variety of emotions due to the complex basics of remote learning.

Because of the lack of extra support, even an average homework workload can be challenging to complete. With motivation slipping and fatigue conquering the mind, school success has been drifting further from reach for many.

One such student is Jacob Yuryev, a freshman at Carlmont High School, who has dealt with the transition into high school and online learning.

“There’s a lot of homework. My time is really full, and it feels like I’m constantly doing homework even though I’m actually not,” Yuryev said. “Because of that, I procrastinate a good amount because it’s stressful to think about all the things I have to do.”

Yuryev’s perspective is one of many. In an informal survey taken by 100 students, mostly from the Bay Area, an overwhelming 84% said yes that remote learning had exhausted them mentally. Students struggling with mental health caused by the virus’s hardships can find themselves using TikTok’s humorous videos to balance the bad. A surprising 72.7% of these students believe Tiktok has aided with the lethargy provided by the pandemic.

Sophomore Alexander Sandin said, “Tik Tok is similar to video games; it helps you to not think about what’s going on in your life at the moment. It distracts you and makes you happy.”

TikTok is a worldwide used app launched in 2016 and used by more than 150 countries containing over 2 billion downloads. The app is commonly known for the wide range of content appealing to all ages, 62% of users being between 10 to 29. Because of its popularity, it’s marked No. 1 for entertainment on the iOS App Store.

Braxton Rodamaker is a sophomore at Sequoia High School and downloaded TikTok last year. Rodamaker enjoys the app’s format, making it one of his primary entertainment sources when he’s bored.

“The platform is similar to YouTube,” Rodamaker said. “But it’s quicker and gets to the point faster. I find it a great platform to use because it doesn’t take as long, and they have some great videos.”

Even before the pandemic, TikTok was doing well, and its popularity has been steadily increasing. In the first quarter of 2020, TikTok had the best quarter of any app ever because of its 315 million additional downloads.

The app’s content can range from self-expression to cute videos of little furry friends. The app ultimately targets universal interests that will make viewers happy. Even an existing hashtag focuses on that goal: the hashtag #serotonin has 181.6 million views showing that viewers use TikTok to up their mood.

Serotonin is a biological chemical that nerve cells produce. When serotonin levels are normal, one is less anxious, happier, calmer, and more emotionally stable. While some causes for these benefits would be exercise, sunlight, and meditating, some TikTok creators tried stimulating serotonin through videos that would attract happiness. Viewers can find these videos by searching #serotonin on the app.
Addictive Nature

With time in idle people’s hands, TikTok draws people searching for joy and laughter to open the app. Comedy is proven to help people cope with challenging times, which is why TikTok is such a hit!

“At any point when I’m bored, I can just open TikTok and immediately start watching random stuff. It makes me feel really good to do it,” Yuryev said. “There’s this anticipation that the next video is going to be the best thing you’ve ever seen, and you can’t stop yourself from swiping up.”

And that isn’t an accident. TikTok has developed an algorithm to keep people engaged and on the app.

The TikTok algorithm places videos that will match users’ preferences, bringing people with similar interests together. Using the information of what watcher’s like and how hashtags and sounds correlate, it will adapt and attempt to make the For You page tailored for that user.

When this happens, people with similarities are brought together to bond over the comment section by having conversations using likes and replies. Valarie Kuo, a TikTok creator and a senior at Carlmont High School, gives insight into the success of the TikTok algorithm.

“The TikTok algorithm is crazy. It does a good job of connecting people who have similar interests or feelings,” Kuo said. “It helps you find people to connect with so you don’t feel alone.”

With the lack of captivation in online learning, it’s more arduous to find that focus and energy to work. In the same survey, 87.9% of students admitted that TikTok had distracted them from schoolwork. As mentioned before, the app reels in viewers, and exiting out becomes very difficult. It’s easier for students to open an app and escape reality by swiping rather than taking the first step to starting homework.

Although TikTok creates captivation, which is its most significant appeal, it can also have its cons, one being a reason to procrastinate.

“TikTok is so unimaginably addictive. You tell yourself that you’re going to spend ten minutes on it but end up spending four hours,” Yuryev said. “I’ve gone through so many stages of telling myself that TikTok is horrible and deleting it but then redownloading it the very next day.”

With at-home learning, kids are given a perfect chance to open TikTok whenever they want to escape their boredom but can end up not logging off until hours later.

“I’ve definitely been on TikTok a lot more,” Rodamaker said. “I would say going at like 2 hours a day when I used to go for 30 minutes.”

Even before the pandemic, a Magoosh report in 2015 stated 86% of high schoolers and 88% of college students procrastinated on assignments. Of those high schoolers, 56% said they get distracted by doing something they would preferably do.
The Dark Side

While many videos express positivity and reassurance, there are some negative aspects of the app. As seen on other social media platforms, TikTok has been an outlet for malicious people to spread hate. According to Pew Research, 59% of teens in America have been harassed or bullied online.

“Because you’re behind a screen, there is a lot of cyberbullying that comes from anonymous accounts, and it definitely affects everybody,” Kuo said. “There’s a lot of body shaming, and there’s a lot of negative things that happen because people don’t have to say it face-to-face.”

Online harassment typically happens in the comment section, where viewers can freely comment on their thoughts. However, the comment section may be turned off or only allow friends to discuss. The power rests in the creator’s hands. While some jokes can be funny, they can also hurt content creators and other viewers.

“I think it hits influencers the most,” Kuo said. “People who’ve risen to fame are being bashed by people who don’t think they deserve that fame. Scrolling through comments or seeing how certain influencers have reacted to quick fame, there is still a lot of negativity.”

Many other students pointed this out in the survey, one including Yuryev. When bringing up the topic, his disgust for the negativity was apparent.

“The TikTok community does not seem like the nicest place. They’re always mean and judgemental, and there’s so much drama, “Yuryev said.

Some influencers have problems with each other, leading to targeted short videos. As a result of this, creators drag millions of viewers into the drama. Some of these causes can vary, but a major one is conflicting views. One example is political arguments that boomed during the 2020 election. During this time, TikTok became a platform for political education and discussions. In fact, 64% of Americans say that social media has had a mostly negative influence on the events that are happening in America today, one being the election.

On the other hand, other conflicts can be over the number of followers. Consequently, quarrels and harsh behavior can appear on the app, which doesn’t have the best influence on viewers.
Positives

Despite its sometimes addictive and toxic nature, TikTok has provided students with other ways to cope, not including comedic videos and wholesome clips. One being motivation.

Many TikTok creators have provided the inspiration that many have lost during quarantine. Whether it be getting out of bed or going for a mile run, many TikTok creators offer their inspirational words. In fact, in the self-conducted survey mentioned before, 81.8% responded that they had gained motivation from TikTok.

Pep talks throughout the app can also empower females, praise equality, or remind watchers to get off TikTok and do their work. Influencers express their empathy and their help because, in the end, everyone is going through the same crisis.

Because of the pandemic’s restrictions, keeping in touch with friends is a new difficulty. Without being able to see a lot of friends, drifting may occur. However, TikTok provides a way to send videos to friends by message or merely tagging them in the comment section. It’s a more comfortable conversation starter and even a little something to spark up old relationships.

“When my friends send TikToks to me, it’s an easier way to connect instead of meeting up with them,” Rodamaker said.

Another effect of the pandemic is that many teens have developed an amplified sense of loneliness, leading to other feelings. Some of these include depression, tiredness, and apathy. However, a variety of TikTok videos can mend the feeling of isolation.

The sense of community on the app was proven effective by some local students when an astonishing 83.5% of students noticed it in the comment section. The positive comments can help people push through life’s hardships, one group of people being the LGBTQ+ Community. The Washington Post stated that TikTok had become the soul of the LGBTQ+ internet, creating a space to relate and support each other. Nevertheless, that’s just one fraction of the TikTok community. Some others include cooking, gaming, and mental health.

Despite TikTok’s attributes such as cyberbullying, hostile behavior, and it being a distraction, it’s a resource for uplifting content. Everyone is going through the same historical event, and TikTok has provided away to connect with people worldwide. The app brings out laughter and hope. It uncovers a relieving smile, a virtual shoulder to cry on, and a light at the end of the tunnel.

This story was originally published on Scot Scoop News on January 26, 2021.