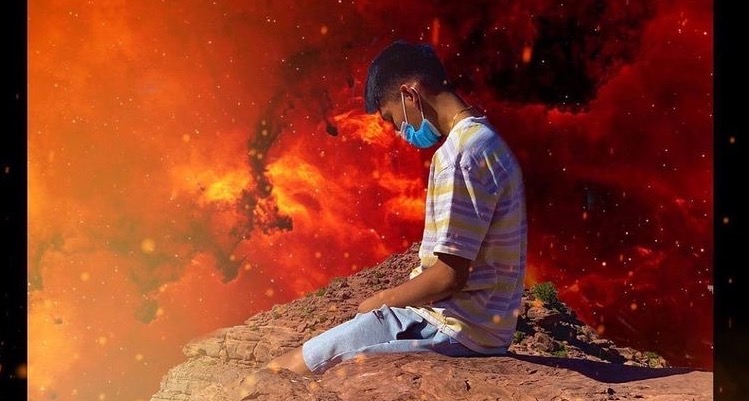 Young Kristo’s cover for “HADES,” Coquilla’s first song, which was released on July 13.

Sophomore Christopher Coquilla joked about being a rapper on SoundCloud, an open audio and music platform, near the end of his freshman year.

“I just kept telling everyone, ‘Oh I’m going to be a SoundCloud rapper in the summer,’” Coquilla said.

He polled his followers on an Instagram story in June asking if they would listen to his music, hoping to start making music if the poll got more than 50% “yes” votes. But rather than letting a number determine his future, he decided he was going to start making music regardless of the results. 100 respondents ended up participating in the poll, with a 95% vote in favor of his music.

“I was like ‘I’m going to do it because I want to do it,’” Coquilla said. “Lyrics came super easy to me; I didn’t get stuck writing lyrics and rhyming or anything. So I just kept doing that, and then also realized that it was a good stress reliever and it took my mind off of things.”

He produced his first song, “HADES,” during a 10-hour road trip to Las Vegas.

“I just took my computer with me and started playing around with some beats in the car,” Coquilla said. “I actually made the whole beat in the car on the way there, and all the lyrics at my grandma’s house.”

“[HADES] will forever be ingrained in my head because he was in the back of the car with a little beat machine,” Coquilla’s sister said. “He was like, ‘Does this sound good? OK, what about this?’ It was really funny.”

When he posted “HADES” to SoundCloud on July 13, 2020, its cover photo was of him at the Grand Canyon, which reminded him of the underworld, inspiring the song’s title. He chose the rap name Young Kristo.

Coquilla’s father, a former DJ, was ecstatic when he found Coquilla mixing beats for the song “HADES.”

“When he saw me making beats, he was like, ‘What the heck! Put me onto this,’” Coquilla said. “He was there the whole time helping me, mixing beats and making the song how it was. […] He would tell me what sounded off, what was too loud and just how to create it in general.”

Coquilla cites his father as an influence for his music, as he and his father always listened to “old school hip hop” and rap music in the car on the way to soccer practice.

Some artists they listened to included N.W.A., Polo G, and Lil Tjay.

Coquilla’s sister also cited her family as a reason her and her siblings love music. Her father was a DJ, so he taught his children how to make songs, and her mother used to hula dance, so they often listened to Hawaiian music.

Coquilla recalls his family feeling disbelief when he showed them his vocals for “HADES,” which he recorded in secret.

“They didn’t really know [that I was making music] until I showed them the song, and they were like ‘No, this isn’t you. Did you make the lyrics?’” Coquilla chuckled while recounting the memory.

“When me and my sister heard his first song [“HADES”] we were both like, ‘Woah, what is this?’” Coquilla’s sister said. “It’s so funny because me and [my sister] Catherine know all the lyrics, and we can sing them throughout the house randomly.”

Sophomore Brandon Tran, a childhood friend of Coquilla’s, was not surprised when Coquilla started making music.

Tran recalled one specific instance that he felt was a turning point in Coquilla’s musical journey.

“[During lunch], him, me and one other person, Juice, who also makes some music, would sing acapella,” Tran said.

Tran also plays music with Coquilla in his free time.

“We live just a few blocks away so every so often we’ll jam a little bit,” Tran said. “I play some other instruments, so I’m hoping that we could probably form some kind of band and make some music together.”

Coquilla did not originally plan on making his seven-song album, “COLD HEARTED.”

“After the first three songs I put up [on SoundCloud], I just started making more songs,” Coquilla said. “But I had no time to release those songs. […] It was basically me procrastinating, and then ending up with an album.”

His favorite song off his album is “Worthy (Prod. Aitch x Camatk).”

“After I make songs in my room and make the lyrics and record, I bring my laptop downstairs and play them on the big speakers,” Coquilla said. “When I played that one song, ‘Worthy,’ in the ‘COLD HEARTED’ album, I think that got the best reaction out of my family, so I like that song a lot.”

As for future plans, he hopes to make more beats by himself.

“Because school started, I really didn’t have time to make beats by myself,” Coquila said. “In order for me to use them, I have to put the producer in the name.”

Since Coquilla used pre-made beats for some songs, he credits the artist by using (ft. [producer’s name]).

He also credits being a part of UPA’s band as something that helped him make beats and focus on rhythm, as he played alto saxophone in both beginner and intermediate band.

“[Band teacher Jemal Ramirez] and everything [in the class] helped with my rhythm and harmonization,” Coquilla said. “In general, it gave me an ear for music, like what notes go together. But mostly it helped me with creating melodies and just helped me be more creative in music in general.”

Coquilla’s sister also cites lyrics as an important part of his music.

“When he raps and tells me the lyrics slowly, it kind of sounds like poetry,” she said. “I love that because I like to write poetry and what he’s doing is just writing poetry to a beat.”

One notable line from “HADES” is when Coquilla raps “Grabbing a shovel. I’m digging a grave for the people who bring me down talking Hades.”

As for the future, Coquilla has a few plans.

“I’m just doing all this for fun but I’m just going to keep making songs and hopefully be on Spotify in the future,” Coquilla said. “It would be sick if I blew up.”

On Jan. 29, Coquilla plans to release his newest song, “From Below.”

This story was originally published on Aquila on January 28, 2021.