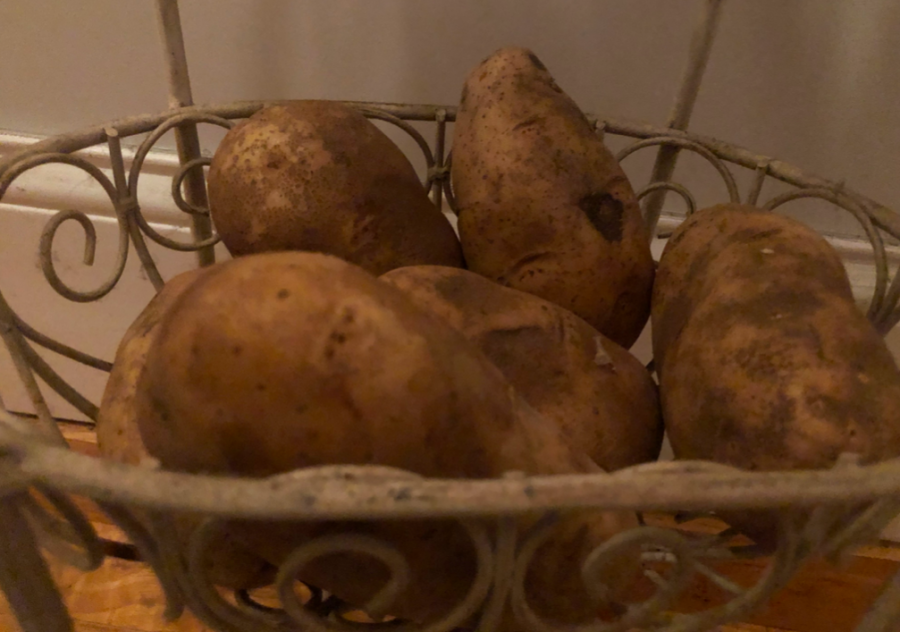 Following the suspicious appearance of two baked potatoes on the Wayland Public Library lawn, Library Director Sandy Raymond shared a social media post that quickly gained national attention from Stephen Colbert's 'The Late Show.' "I thought it was cool that our town was represented on such a famous show," sophomore Dylan Wood said.

By Genevieve Morrison and Charlotte Thirman

In the early hours on Thursday, Jan. 14, Wayland Public Library Library Director Sandy Raymond found two baked potatoes outside the library. This puzzling appearance has sparked confusion amongst the Wayland community. Raymond promptly posted about the potatoes on social media, and they soon garnered national attention.

“Calling all sleuths!” Raymond said in a Facebook post. “The front lawn of the library has been accumulating what appear to be perfectly lovely baked russets.”

After stirring up debate in Wayland, the news went national when Stephen Colbert mentioned the event on ‘The Late Show’ in his segment “Quarantine-While.”

“This is the kind of news I’m hoping to spend more time thinking about in 2021 because in Wayland, Massachusetts, librarians are mystified by potatoes gathering on the library’s front lawn,” Colbert said.

The segment on ‘The Late Show’ was welcome news for many people who live in Wayland. Because Wayland is such a small town, any national recognition is often unexpected.

“I thought it was cool that our town was represented on such a famous show,” sophomore Dylan Wood said.

The acknowledgment was an exciting moment for the town, especially for Raymond, who was mentioned by name.

“Funny for me because, being the grammarian that I am, when I heard the parts where he was talking about the choice of words, I was like ‘those aren’t my words, those are the reporter’s words,'” Raymond said. “But I quickly stifled that because it’s Colbert.”

After the segment on ‘The Late Show’, Raymond noticed a change on the library lawn since the potatoes first appeared.

“Upon my observation today, the first potato seems to be gone, and I’m not sure if it’s a new potato in place of the second one,” Raymond said. “But it’s three feet away from the original place that the second one was, and it’s raw, not baked.”

With the potatoes’ mysterious arrival, the librarians and the community came together and tried to find the perpetrator to find out why they did this.

“If I had to take a guess I would have to say some kid got a spud launcher for Christmas and was shooting out the window of their car as they drove along,” Raymond said. “And if that’s the case, I’m glad they missed the library’s windows.”

This story was originally published on Wayland Student Press on February 4, 2021.