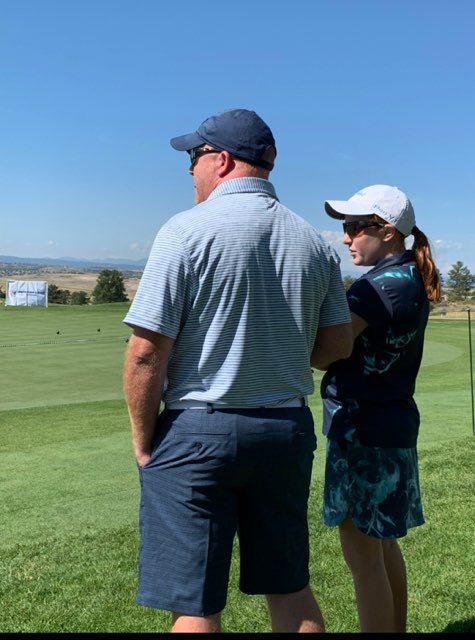 During the Drive, Chip and Putt Regional Finals in Colorado, Jamie and Kylie Secrest overlook the course. The Regional Finals took place in fall of 2019, about a month prior to Jamie's first symptoms and about three months before he received his diagnosis. “It was a really awesome opportunity because I got to meet so many people and got to see a part of the golf world that I wouldn’t have seen otherwise. It was absolutely beautiful up there,” Kylie said.

With just a simple Google search of freshman Kylie Secrest, you can discover who she is: a 14-year-old golf prodigy who has competed in everything from local competitions on the high school golf team to Pinehurst, the world golf championship for her age group. However, what you may not know is that her father, Jamie Secrest, is battling amyotrophic lateral sclerosis (ALS), a progressive neurodegenerative disease that affects nerve cells in the brain and spinal cord.

Jamie received his diagnosis in December of 2019 after he noticed increased weakness in different parts of his body. The news came as a shock to the Secrest family.

“I saw my mom and my dad crying, and I’ve never seen them cry before, so I immediately felt panic, and I was really scared. I didn’t really know what the disease was at that point. My parents just said ‘it’s going to be OK,’” Kylie said. “My dad’s the one who introduced me to the game. He’s the one that had taught me how to hold a golf club for the first time.”

Jamie and Kylie have always been close, and as Jamie’s disease has progressed, their relationship has held true, as different as his abilities now may be.

“Up until the time of his diagnosis, we had always done it together. He’d always been cutting for me and even now, he still tries to from a golf cart,” Kylie said. “It’s always been me and him against the world of golf, so it’s just one of the important things that have kept us all together.”

Additionally, the family’s unwavering positivity has played a big part in keeping them together as Jamie’s nerve cells progressively stop working and die, causing weakness in different parts of his body.

“There may be times where certain muscles are not working right and I can’t dwell on it. I am always trying to keep a positive outlook and a positive mindset, and I just deal with the cards that I’m given and I overcome it,” Jamie said.

Kylie did not get her start in golf until fifth grade, but she believes that has benefitted her.

“I don’t really regret anything [about my younger years], I don’t regret doing gymnastics like I did instead of trying golf. If I had started any earlier, I would’ve gotten sick of it if I’m being completely honest. Some of the girls that I’m up against that have been playing since they were four, maybe even five, they don’t want to improve, they don’t want to do anything, they don’t want to practice, and it’s their family that wants them to do it. I’m just doing it for myself now, instead of other people wanting me to do it,” Kylie said. “Especially when it comes to skill level, [starting later] just pushed me to do better and to improve faster.”

After just three years of playing golf, Kylie earned the 2019 Player of the Year award from the Professional Golf Association (PGA).

“Leading up to winning the award I was always very nervous, those nerves had sometimes got the best of me,” Kylie said. “I put earbuds in and listened to a song on my phone, and that [helped to] calm my nerves.”

With playing golf, doing school and taking on extra chores at home to help make life a bit easier for her parents, Kylie had to find a strategy to balance everything she has taken on.

“I mainly just balance [life] out by trying not to get too overwhelmed, because that’s something that I struggle with and if I get too overwhelmed, then I just have to step away,” Kylie said. “I [also] learned just to be yourself and that it’s OK to have failures, it’s OK not to play your best. You just go out the next day and have a better mentality and have a better strategy.”

As far as the future is concerned, the Secrests are just taking it one day at a time.

“Looking forward into the future, we’re just trying to do everything we can to prepare for the months ahead. We’re just going to stay positive,” Kylie said.

This story was originally published on Pathfinder on February 12, 2021.