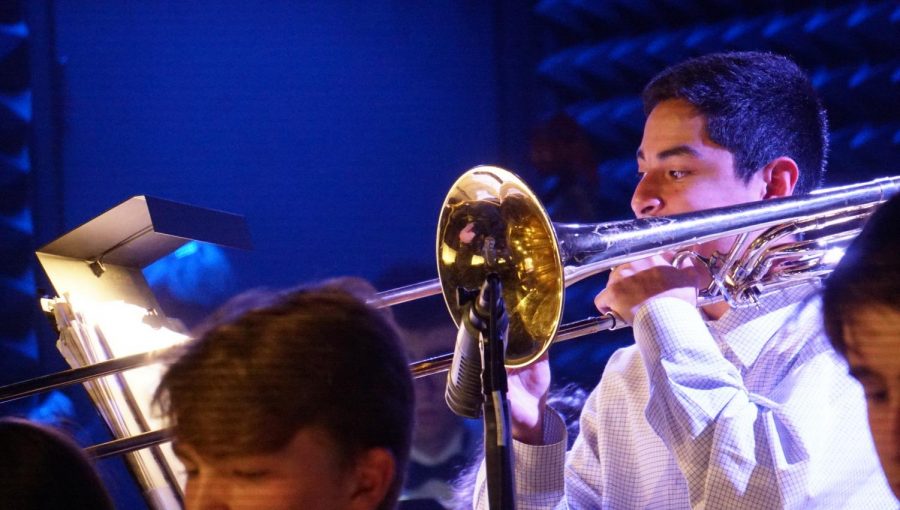 When Jacob Martinez started playing trombone, his instrument was taller than he was. It was sixth grade, and all he wanted was to play saxophone or trumpet, so when the directors gave him his horn, all he can remember thinking is “… what?”

“I was a little confused as to why I couldn’t play something smaller,” Martinez said with a laugh, “but that’s kind of just how it started.”

Now a senior at McCallum, Martinez has earned all-state recognition in band all four years of high school — his freshman and sophomore year a member of the 5A All-State Band, junior year the 6A All-State Symphony Orchestra, and this year, All-State Jazz Ensemble.

When Martinez first got to high school, he had no idea he’d earn state recognition his first year competing.

“I tried my best to just work as hard as I could and be the best that I could be during that time,” he said, “and surprisingly enough, it was good enough to make state. I remember waiting in the cafeteria for the results, and then when I saw them, I was filled with joy and excitement just because of what I accomplished, you know? It’s moments like those where all the hard work pays off.”

After the first year’s success, Martinez was determined to repeat the accomplishment.

His freshman and sophomore year, Martinez travelled to San Antonio for the 5A All-State TMEA Convention, a clinic composed of the highest-ranking high school musicians in Texas.

And according to Martinez, countless hours were spent doing just that.

“You wake up and then you play for like four hours, then you have a little lunch break, and during the lunch break you mess with the other instruments, and then you go back to rehearsal for another five or six hours, then you go to sleep, and you repeat that for four days,” he said. “And then on the last day, you pack up your stuff and go perform and celebrate with your family, and they’re like ‘Oh my god, it’s so good! How’d you do that?’ And I’m like, ‘I don’t know, I just did it.’”

His junior year, Martinez decided to switch pace for the audition process, registering for the larger, often more competitive 6A route. Because McCallum is a 5A school, the majority of students compete in that group. Martinez, however, opted for the audition with larger schools, meaning more competitors, and with that, a greater intimidation factor.

What happened next, Martinez describes as a funny story.

“So I got a jazz lesson teacher,” he said, “and we were working hard on the jazz etudes. He was like ‘Yeah dude, you’re gonna make it. I just know it, you’re gonna make it,’ cause he was a former jazz judge for about 20 years, and he had a lot of experience. And I was like alright, if I’m gonna make All-State jazz I might as well go up to 6A for regular TMEA, because it won’t even matter, right?”

But it did, indeed, matter.

At his region orchestra audition later that month, the pressure grew even greater.

“After the results were posted, one of the trombone judges came up to me and he was like, ‘Yeah dude, Jacob, I know you made first in this room, but you are not gonna last in the 6A area room, and I was like ‘Oh crap.’”

Martinez began practicing more than ever. In the weeks leading up to his 6A TMEA audition, he recalled using his metronome and tuner every time he played, which was hours each day.

“I learned to teach myself better technique on the trombone after that, because I played so damn much on it,” he said.

The practice paid off when Martinez made first chair in the 6A audition room.

“I honestly think it was a good thing that that happened, because what that taught me was that sometimes, life is gonna throw you curveballs and it’s not exactly gonna go your way,” Martinez said. “You always have to be ready to improvise.”

And according to McCallum band director Carol Nelson, that optimism is one of the things that makes Martinez so special.

Nelson also recalled her 40th anniversary marching show, a performance where Martinez brought Nelson to the front of the field and presented her with flowers to celebrate her time at McCallum.
“He was beaming, and I still remember him just smiling and being Jacob,” she said. “That’s a memory that I will never forget.”

Even from the beginning, when Martinez first arrived at Mac, Nelson knew he would succeed in what he did.

“He may have been surprised, but I wasn’t when he made state as a freshman, because I knew Jacob was a talent,” she said. “He’s just a gem, a musical gem.”

His musicality, according to senior Jonah Brown, has also influenced other students in the band program. According to Brown, Martinez’s long-time friend and fellow trombone player, being around Jacob is an instant motivator.

“I saw Jacob make all-state jazz this year, so I was like, OK, I’m going to really push for state,” Brown said. “I developed some of Jacob’s practicing styles, and it worked — I made area and got second chair! The trombones kind of take little things from what Jacob does and we implement them, and it works. He inspires us to place higher and do better.”

The way Brown sees it, it’s difficult to not smile when around Martinez — whether in a musical setting or not.

“Let’s say someone’s talking to you, and you have to be serious,” Brown said. “Jacob’s the one standing behind them and dancing, and you just can’t help but smile. He’s just like that: he wants to make people laugh, to make people smile.”

Looking forward, Brown knows that his friend will be successful in whatever he takes on, and he admires that most.

“Whatever he sets his mind to,” Brown said, “Jacob can do it.”

This story was originally published on The Shield Online on February 13, 2021.