The decision needs to be approved by the Board of Education, which could happen as early as March 8. 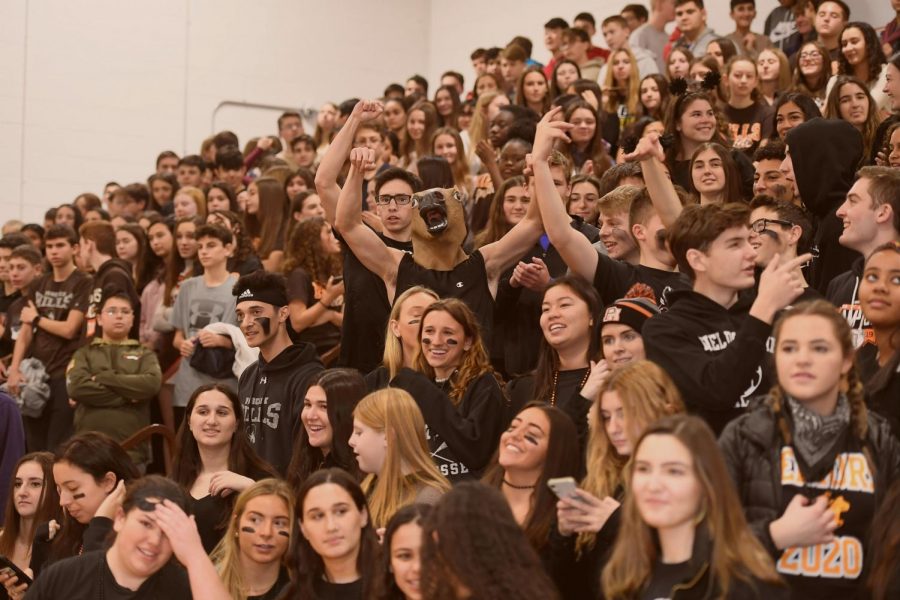 Hills students cheer for their fellow students at a pep rally during the 2019-20 school year.

They voted in-between classes and meetings, from their bedrooms and their offices, during their Pascack Period and their lunch break. No matter where and when they cast their vote, Pascack Hills students and staff made their voices heard on Thursday, recommending Broncos for Hills’ new mascot –– and, in doing so, likely defining the school’s future.

The Trailblazer learned of the results shortly after the school-wide vote concluded on Thursday at 3:30 p.m, and they were confirmed by Principal Tim Wieland in an email. The Broncos mascot is not official until it is approved by the Pascack Valley Regional Board of Education. This approval could come as early as the Board’s March 8 meeting, when representatives from the mascot search committee will present the school’s choice.

“The turnout was terrific, and we want to thank everyone who participated in the voting process,” said Wieland.

The vote was not held under normal circumstances, with the Hills community discussing their preferences behind masks and computer screens, being just as connected through Google Meets as through the hallways.

There remains dissatisfaction with the Board’s decision to remove the Cowboys mascot and the mascot search process that followed. However, 75.6% of eligible students and staff members participated in the vote, representing a level of passion that has become rarer during the pandemic. This turnout percentage translates to 779 voters out of 1,030 eligible voters.

Athletic Director Phil Paspalas spearheaded the mascot search committee, which arrived at its three mascot finalists on Feb. 10 and presented the choices at the Board’s Feb. 22 meeting after they were vetted. Paspalas then sent a slideshow to the school explaining the rationale behind each choice. On Thursday, at 8 a.m., the Google Form opened for students and staff. Throughout the day, Paspalas emailed (many) reminders to vote in hopes of maximizing participation.

Pascack Valley chose Panthers for its mascot recommendation, according to the PV Student Publication.
Students explain their vote
“[Broncos] is the option that keeps Pascack Hills’ themes,” said Hills senior Larissa Aquaviva before the vote opened. “The horse logo can still be used, without the cowboy, so that keeps Pascack Hills on brand.”

While Aquaviva and many students cited this Western connection as a reason for their votes, others argued it was a reason to not vote for the Broncos. Those who supported Phoenix argued the mythical bird was a fresh start for Hills with an exciting potential logo, while those in favor of Trail Blazers liked the sound of the nickname and its connection to Hills.

Although many supported the Broncos and praised the work of the mascot search committee, many students remain disappointed that the Cowboys mascot was removed, accusing the administration of bringing politics into its decision-making.

One anonymous junior said they didn’t “entirely love the mascot choices, and I feel like the school has been trying so hard to seem progressive by finding these gender-neutral mascots.”

The vote has nonetheless captivated attention in the classroom, with faculty such as social studies teacher Brooks Alexander incorporating the mascot topic into a Public Policy lesson on Wednesday.
How Hills got here
The mascot search committee first met on Jan. 6. Over the course of three additional meetings and several surveys, the committee narrowed down an initial list of 38 suggestions, eliminating choices based on factors like unpopularity, negative rationale, and overlap with options being considered by Valley. In order to select the top three, Paspalas sent out a poll on Feb. 5 to committee members to select their top preference out of the five remaining options. 46 out of 51 committee members responded to the poll that determined the top three.

The committee’s work was guided by a process and criteria for the mascot that the Board approved last October. According to Paspalas, these criteria included names that ” are positive and inclusive in nature,” “promote pride and excitement,” “cannot be identified with a gender,” and portray values such as strength, pride, togetherness, and compassion.

The Board voted to remove the Cowboys mascot last June along with Valley’s Indians mascot. Eight months later, and even though a new mascot has been voted on, the Board’s decision remains controversial. While it has been vocally praised by many in the school community, it has also been criticized by others –– including some Board members themselves.

After the Cowboys and Indians debate resurfaced at a Board meeting in January, with four new members able to provide input, Superintendent Erik Gundersen affirmed that neither could be considered due to the criteria set forth by the committee.
What comes next
Although the Hills community has made clear its preference for their school’s new mascot, the choice still has to be presented to the Board for their consideration. This will occur at the Board’s March 8 meeting, and from there, Board members may take several days before making a final decision on whether to approve the mascot.

If the Board does approve the mascot, the mascot search committee will reconvene to select an original graphic or logo to represent the Broncos. Three logo options would eventually be presented for a school-wide vote, and after approval of the winning logo from the Board, the Broncos mascot would begin to be implemented across the school.

The implementation of a new mascot will come at a cost. At the Board’s Jan. 18 meeting, Gundersen said the current estimate for replacing all Cowboys branding at Hills is $31,000. It will cost an estimated $53,000 to replace athletic uniforms, and the replacement of the football end zone and wrestling mats are estimated at $75,000.

Covid-19 could help cover these costs, according to Board member and Finance Committee Chair Michael Fronte. According to financial auditors who delivered a presentation at tonight’s meeting, the district “remains very strong financially” with a surplus of $2.2 million. The pandemic caused an “overall decrease in revenue and expenditures” related to transportation, athletics, and co-curriculars.

In a statement read to the Trailblazer as the mascot search process neared its conclusion, Gundersen said students and staff’s decisions would “have an everlasting impact on future generations who walk through the halls of Pascack Hills High School.”

This story was originally published on The Trailblazer on February 25, 2021.