Expressing Opinions at Latin: ‘There Could Be Consequences’ 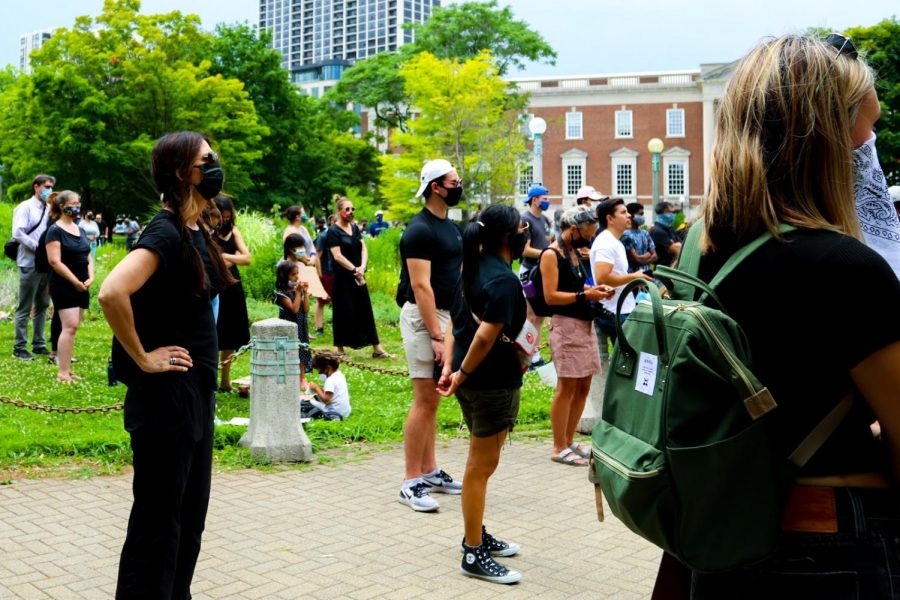 Members of the Latin community listen to the organizers of last summer’s student protests against racial bias and inequality.

When freshman and Forum staff writer Eliza Lampert aimed to “cover both sides” of the Biden executive order that widened access for transgender athletes—a subject that has spurred fiery national debate—she faced a problem: One side of the argument was nowhere to be found.

“I spent my whole weekend chasing people for their reactions to Biden’s order,” Eliza said. “A lot of people recited the same thing: ‘Oh, I support anything that expands rights.’ Some weren’t comfortable commenting at all—they were afraid of backlash.”

For the last few months, Latin’s leadership has rarely—if ever—been able to escape the community’s crosshairs. Whether concerning racial inequity or in-person learning, ongoing discontent has forced the administration to scurry from wildfire to wildfire, armed only with a pail of water. But even as unrest has led the school to reflect and evolve, one feature has remained constant: a fragmented sphere of civil discourse, underpinned in part by fear and self-preservation.

On February 19, The Forum, with assistance from AP Statistics teacher Tim Kendrick, conducted a study of 40 students on the state of discourse at Latin. Participants were asked to rank a series of statements from 1 (strongly disagree) to 5 (strongly agree).

In the study, the statement “I feel that my opinions are respected by the Latin community at large” garnered a mean of 3.86, or a soft “agree.” Meanwhile, the average response to “If I held an opinion that none of my Latin peers agreed with, I would still feel comfortable sharing it in a classroom” was 2.86, a soft “disagree” and a full-point decrease from the prior question.

Moreover, the mean student response to “I believe that Latin is an institution at which ideas that challenge the majority opinion are silenced” was 3.11, a near-neutral “agree.” Not one participant indicated that they strongly disagreed.

The data—particularly on the first two questions—suggests a general ideological comfort among students, but also an acknowledgment that ideas which run counter to the norm might be met with hostility. In other words, yes, Latin students largely feel safe in holding their opinions, but might not feel the same way if those opinions differed from the majority.

“This situation isn’t unique to Latin,” said Rashail Wasim, a senior who lobbied for ideological balance by prompting Latin’s Wall Street Journal subscription. “If there is overwhelming consensus on a certain issue in any setting, speaking out for the other side is always going to take a level of commitment that many people feel is unnecessary.”

This social dynamic has played a worrying role in history classes, which tend to ground themselves in student discussion. “Last year, my seniors identified a ‘bottleneck’ in the dominant perspective at Latin,” said Upper School history teacher Cara Gallagher, who also helped lead the Student Diversity and Equity Committee’s community initiative on improving civil discourse around the 2020 Presidential election. A “bottleneck,” as taught in her American Politics class, is a social structure that warps or inhibits equal opportunity. “Students felt like the dominance of one political perspective at Latin would make them vulnerable in their lives beyond Latin; like, they might feel consequences on a college campus, whether from a roommate, professor, or teaching assistant.”

“I was fascinated in particular with the cancel-culture element of the summer,” said Ms. Gallagher. “It felt like there was even more reluctance, by both students and teachers, to engage in conversation on political topics, because there was a real sense of consequences.”

“In my classes, we’re still in a phase where discourse needs to be encouraged,” said Matthew June, who teaches Honors U.S. History and Historiography. “Students have some hesitation about saying the wrong thing, which holds back a lot of openness.”

“There is a sense that conservative views are less welcome in class than progressive or liberal views,” Dr. June said. “That’s something that teachers need to address at the individual level, but we also should think about it holistically.”

If civil discourse is choked at the classroom level, what has the Latin administration done to improve it from above? On November 3, the night of the 2020 Presidential election, Head of School Randall Dunn shared a link to OpenMind, an online conversation guide, with the entire Latin community. “I felt it was particularly helpful in walking me through the steps of having a difficult conversation with a pretend ‘Angry Uncle’ who disagrees with my political views,” he explained.

After that, the administration’s civil discourse initiative fizzled into radio silence.

“I think that minority opinions have been silenced in the past at Latin,” said senior Spencer Gunning, who leads the Conservative Student Alliance (CSA). “Not nearly enough voices were being heard and actually listened to. However, I do believe that Latin, even virtually, has taken great strides this year into fixing that problem.”

“Mr. [Kirk] Greer actually did a pretty good job of trying to facilitate some civil discourse,” said Jack Hallinan ‘20, a past leader of the club, which was then called Young Republicans of Latin. “He even tried to find a spot for our conservative speaker. The issues came with other members of the admin who chose to not apply the same standards as they did other clubs.”

Turning Point USA, a far-right advocacy nonprofit with links to Donald Trump, regularly faces scrutiny for its statements. On February 26, Rob Smith tweeted, “Questioning the use of powerful puberty-blocking hormones on gender-confused children should be the least brave or controversial position there is. And yet, here we are, with weak liberals, ‘feminists,’ and gays and lesbians bullied into silence. Cowards.”

“For other clubs or speakers,” said Hallinan, “the administration would block out a clubs period or extend a gathering or something like that, but they told me that assembly spots were booked ‘a year in advance.’ There was a pretty good amount of student demand to bring a conservative speaker to Latin, so it’s a shame that it couldn’t happen.”

The Latin administration denies that anything beyond scheduling conflicts prevented Hallinan from hosting Smith at the school.

The school, whose community still feels the aftershock of a summer spent reckoning with online allegations of racial injustice, weighs discourse against sensitivity on a regular basis. “On the one hand, there are conservatives feeling like they don’t have a voice. It’s a fair claim,” said Dr. June. “But there’s also a fair claim made by others who recognize that our civil discourse initiatives can run up against our diversity, equity, and inclusion initiatives.”

“Conservative views have come to mean very different things. I don’t think there are any teachers who are opposed to an open debate on the size of government, or Keynesian versus Friedman economics,” Dr. June said.

“James Baldwin’s quote on civil discourse encompasses my beliefs eloquently,” said sophomore Sanaiya Luthar, a member of the Demanding Accountability student group that organized last summer’s protest. “It’s one I was introduced to during a community conversation on racial injustices last year: ‘We can disagree and still love each other unless your disagreement is rooted in my oppression and denial of my humanity and right to exist.’”

Kazi Stanton-Thomas, a junior and co-head of Latin’s LGBTQ+ Affinity, said, “Topics like reproductive rights, sexual and gender rights, and other civil rights should never be contested, as all should have the right to their humanity and to equality and equity. Any other idea is essentially fair game.”

Eventually, Eliza found a con-argument for her feature on the Biden order, and could subject her finished piece to passionate contention.

“We want students to engage in politics, to talk across viewpoints,” said Ms. Gallagher. “But, right now, there aren’t any safeguards regarding what should happen if someone considers something inaccurate or harmful.”

This story was originally published on The Forum on March 1, 2021.