Senior rediscovers himself during quarantine 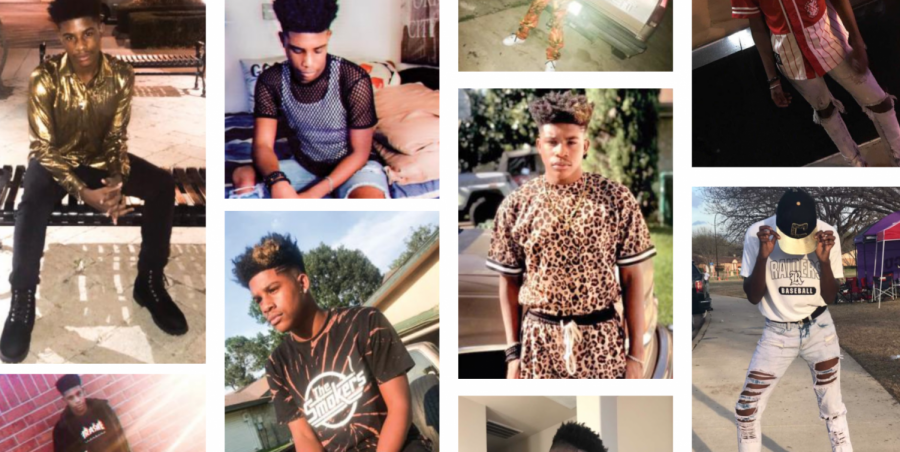 Senior Jaelon Dennis initially used fashion as a way to stand up to his bullies, but he said that he now has a passion for it.

As senior Jaelon Dennis walked into Lewisville High School as a freshman, people stopped to stare.

He wore ripped black jeans and white Air Force 1’s. His black shirt sported gold spots. A gold chain glistened around his neck. He watched the peers who picked on him the year before point and whisper.

He glided past them with a growing sense of satisfaction. For the first time, he felt like himself.

Confidence isn’t foreign to Jaelon. Fashion has helped him hold his head up high since his freshman year.

Last year, this was obvious in the way he experimented with clothing, daring to move past standard Nike shorts and sweatshirts. He wore everything from fishnets to leopard print.

But he had to work for confidence. Jaelon was bullied in elementary and middle school for everything from his weight to his high voice. His peers made fun of him for not being masculine enough and would call him “Gaylon”.

“I would go home crying from the bus every single day because people would just pick on me and bully me on the playground,” Jaelon said. “And I was just like, ‘What am I doing to you guys?”

Nobody tried to befriend him — they didn’t want to be associated with the kid who was deemed uncool or unattractive.

On the last day of middle school, Jaelon went home crying again. His self-esteem was nonexistent. But this time, he’d had enough.

Jaelon knew something had to change. Over the summer, he played baseball and lost weight. But what changed him the most was watching “Keeping Up With the Kardashians.” He was drawn to their relentless confidence.

All of his role models, including singer Nicki Minaj and wrestler Carmella, turned their hardships into positivity and looked good doing it. It was in them that he started to see clothes as art.

Jaelon didn’t begin putting together outfits until his dad took him on a birthday shopping spree later in the summer. Jaelon browsed through rue21, and a pair of black ripped zipper jeans caught his eye. He loved them, but automatically thought about what his classmates would say.

They would call him fat. A wannabe. They would ridicule him like they always did. He put the pants down.

But then he picked them back up.

He grabbed a black, gold-splattered shirt and went into the dressing room. What he saw in the mirror was the opposite of what he expected.

The jeans fit perfectly. For a minute, the voices that pelted him with insecurities were silent. As Jaelon saw himself dressed up for the first time, he felt unfamiliar confidence.
“I never felt like I wanted to look in the mirror,” Jaelon said. “I wouldn’t even look in the mirror in eighth grade.”

And now, because of the clothes, he could smile in one.

Jaelon wanted to feel the way he did in the dressing room every day.

He wore the rue21 outfit to his first day of high school and spent freshman year trying different styles. Slowly, his self-esteem grew.

Jaelon’s parents gave him money to shop, but he also got creative. He mixed and matched his clothes to find new outfits and traded clothes with his brother. Jaelon cut, ripped and added stickers and logos to his old clothes.

To Jaelon’s surprise, he suddenly went from being the school’s target to the fashionable kid. When he moved to Marcus his sophomore year, his fashion sense developed even more and he bought a new wardrobe.

Jaelon was happier than ever. He used to find it hard to get out of bed in the morning, but now he woke up early to pick out the perfect outfit.

“Clothes make me happy,” Jaelon said. “They make me confident. They make me realize that I love myself no matter what.”

Like most kids, Jaelon was relieved when the bell rang for spring break of 2020. He saw it as an opportunity to rest and catch up with friends. But a few days after the break was supposed to end, Jaelon’s parents grew concerned about COVID-19 and wouldn’t let him go outside.

His days of dressing up for school were over. What had brought him confidence and an identity was gone.

His parents’ jobs slowed down, so he couldn’t go shopping. Jaelon wore pajamas and baggy hoodies around the house. His hair grew into an afro because he didn’t bother styling it. Empty soda cans and junk food were strewn across his room. He ghosted his friends. Posting on Instagram was out of the question.

“I was so terrified because all I had was fashion,” Jaelon said. “All I had was going out. Fashion was my escape from reality.”

At the beginning of the summer, Jaelon started spending more time with his older cousin, Shanice. She lost her job because of COVID-19, but she stayed positive, which inspired Jaelon. He started going on hikes with Shanice, which was unexpectedly therapeutic.

Instead of stress-eating, he wrote about his emotions in his journal and read earlier entries to see his progress. Whether it was playing volleyball at the lake or spending time with his family, Jaelon began to discover new parts of himself. They filled the hole in his life that fashion had left.

“As time grew and as time went on, I realized that although I love clothes and they are who I am, I don’t need them,” Jaelon said. “Clothes are just the appearance.”

While it was difficult for Jaelon to choose virtual learning, being at home is easier now that he’s figuring out who he is.

He’s learned that he’s an artist. A good athlete. And to his surprise, a good student. He used to call himself a “dumb blonde,” but this year, he’s keeping up with his classes and is applying to college almost entirely on his own.

He still dresses up when he can. He goes overboard with stylish clothes when buying necessities and wears skinny jeans and bracelets to go on jogs.

“I don’t go out a lot like I used to,” Jaelon said. “So I might as well dress like it’s Fashion Week at Paris to the Dollar Store.”

Jaelon is currently planning his graduation outfit and is thinking about switching up his style again in college. Only this time, he knows who he is beyond his clothes.

“I had to realize that fashion is a part of me, but it’s not all of me,” Jaelon said.

This story was originally published on The Marquee on March 2, 2021.