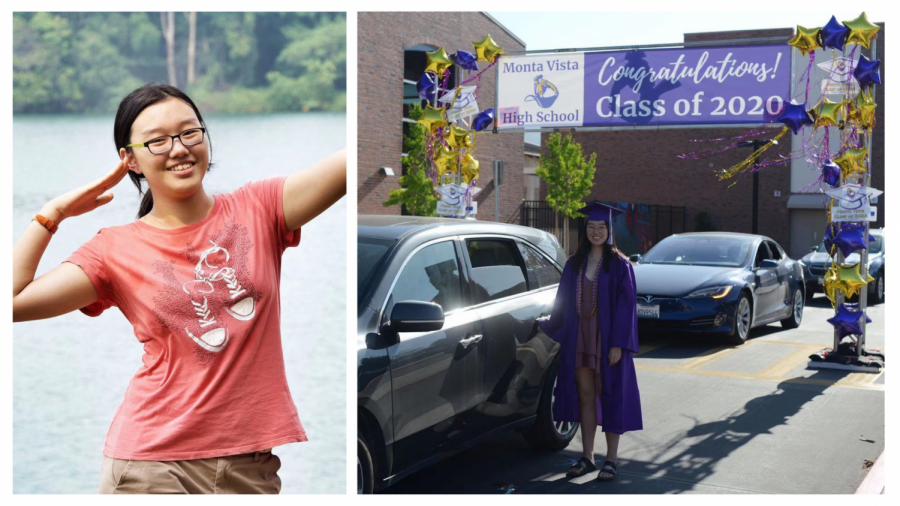 “The fact that I came in 10th grade and I was so lost in the first semester, me and my family, we were just, in the back of our minds, we were always like, ‘What if I had come in ninth grade?’ There’s always so many what ifs. ‘What if I could have repeated ninth grade?’ But I think the philosophy that whatever happens, happens for the best, I think if you have that somewhere in your mind, then it’s just easier to go through with things. And then eventually you do realize that there’s no point in trying to reflect and trying to regret the past. I think you just need to take what’s happened and then run with it. And I think that really has helped me become the person I am currently.”

Junior Jia Desai moved from India to Cupertino during the summer between her freshman and sophomore year. Although Desai had been born in Minnesota, she moved with her family to India when she was nine with the intention of spending more time with her family members who lived there.

“But we always knew that we would come back to America for higher education, simply because it’s much better,” Desai said. “We were always fluctuating on when I would shift. But my dad got a job when I started ninth grade in India, so we figured that I would finish my ninth grade and then I would shift to America. And then I would continue from there. My dad was just searching for jobs in general, but I think we definitely were leaning towards California because the UCs out here, the universities, they’re just brilliant.”

Similarly, Catherine Liu ’20, who moved to the Bay Area from Singapore and attended her last two trimesters of eighth grade at Kennedy Middle School, was driven to move to the Bay Area because of both economic and educational reasons.

“My dad’s company moved his work to America from Singapore, so he was working in the Bay Area for a couple of years before my family decided to just move with him for convenience,” Liu said. “In addition to that, some other stuff would be more educational opportunities and better job employment prospects because Singapore is a really small country, it’s a small island. And it’s definitely not as big and opportunistic a country as America was. So just thinking about the future, for both my brother and I, I think my parents decided to move us here.”

Upon entering high school, Liu recalls how many of the stereotypes she had held about typical American high schools and the Bay Area were disproven and she acquired a more comprehensive and nuanced understanding of the Bay Area.

“Obviously, [MVHS] is very academically oriented, and things like football and cheerleading and being popular was a thing, but I definitely don’t think it’s as big as what the movies played it out to be,” Liu said. “So then I thought that, ‘Oh, the Bay Area must be this place where kids only care about good grades and getting into college,’ which, I guess, kind of is the case, but I feel like once I got to know people a lot more and learn about why they do the things they do, like why they play this sport or why they took these classes and finding out that some of them actually have genuine reasons behind things that they do instead of just getting into college, that kind of brings a more human aspect to the stereotypes that people associate with the Bay Area Silicon Valley bubble.”

Liu also notes how moving to another country while she was in school had a large impact on her academic life, largely because of the difference in the educational structure between Singapore and America. According to Liu, during her schooling in Singapore, the focus was placed on two major exams each year, which would decide a student’s ranking and the classes that they would take.

“It was no longer just like taking a test and then trying to switch classes,” Liu said. “Everything I did, like homework, projects and exams, all counted or had some kind of consequence or had like a certain risk or stake to it. And that took me a while to adjust to, I didn’t really understand it at first, but as time went on, I think I got better at just realizing the stakes behind it. I knew how to study when I came here because that was kind of all I did in Singapore and that kind of helped me, I guess, in terms of managing my time, doing well in classes and all that.”

While Desai was also impacted academically during her shift to the Bay Area, she attributes her experience to a difference in teaching methods between the U.S. and India. As a result, Desai describes how she struggled to adjust initially.

“So it was tough,” Desai said. “I’ll be honest, it was quite tough. I think the first semester I ended up doing really mediocre. The thing is, the method of teaching in India and America is really different. Out here, they actually make you think about assignments and think about answers to events that have happened, like in every single subject. Honestly, the education in India was more memory based rather than practicality and actually figuring out the solution on your own. I feel like, because of that, that was one of the things that contributed to the difficulties I faced when I shifted, because I had to figure out quite a few things on my own as I was doing it.”

Henry Huang immigrated from Taiwan to Los Angeles before starting 7th grade, and then moved from Los Angeles to the Bay Area the second semester of his freshman year. After receiving his undergraduate degree from UC Davis, Huang now lives in the Bay Area with his wife and son, who currently attends MVHS. Although he moved to the Bay Area at a different time, Huang recalls how he faced many of the same struggles in adjusting to his new environment.

“Honestly it was more about ‘why is this decision being made? Why can’t I have the same set of friends for all four years in high school?’” Huang said. “Right, but unfortunately that’s not an answer that my parents were able to grant me that wish. So I think after a couple of months of complaining a bit, and then having some issues, in a way I had to understand my parents, as a new immigrant, they need to seek financial resources to support the living and the lifestyle here. So, again, after two to three months, I think the economic decision overwrote the emotions, hopes, frustrations and then it kind of went away. So that’s kind of how things are dealt back in those days.”

Moving to another country also impacted Huang’s relationships. Although due to differing reasons, both Huang and Desai struggled to maintain connections with their friends back in Taiwan and India.

“In the days when I was in middle school and high school, telephone calls overseas were quite expensive, so I relied on writing letters communicating with friends back in Taiwan,” Huang said. “But after a few months and years, the frequency has kind of died down, so that communication kind of ceased after six, nine months. After we moved to [the] Hayward area from LA, there were some calls and then some visits, we went back a few times to visit friends and then classmates and things like that, but again, the frequency and the distance did not hold well for these long term sort of friendships, so it kind of faded away.”

“As far as my friends in India, I have tried to stay in touch,” Desai said. “I think the time difference really factors in. Plus, the higher we go in education, right. So there has been contact, but it’s not been as prominent as I would have preferred, but I think that’s just it, right? Like living on the other side of the world. I think that’s just something that was bound to happen.”

“So the social life was a bit tough starting off, because I just wasn’t sure how to interact or what the students out here, what they’re interested in or how could I start a topic or something like that,” Desai said. “But eventually, in the classes itself, I was able to, you know, make friends, conversations led to other conversations. And yeah, so I think it did take me some time to get adjusted to the social life out here. Also, the whole lockdown really impacted that, like, it made it worse because I just had like one year to physically interact with the kids out here.”

Similar to Desai, Liu also struggled initially with the cultural differences after moving to America, which hampered communication between her and her peers, who were unable to understand certain aspects about her culture. At the same time, Liu acknowledges that her transition was facilitated by her familiarity with the English language.

“Both back in Singapore and the Bay Area, Asians were the majority,” Liu said. “But I would say that even though we’re of the same ethnicity, our backgrounds and growing up experiences are really significant. I would say it was both a challenge and also not as much a challenge in that, partially because in Singapore I grew up speaking English and learning to speak English, so in terms of communicating with my peers like knowing the language was a lot easier. But I did feel kind of isolated sometimes, all alone, because nobody else was from Singapore and there would be things I’d talk about where nobody else could relate to or understand, and for a while that kind of bothered me. But I think slowly as I learned more about America and American culture, it’s not as big an issue anymore. And I think nowadays I think of my Singapore background not as something that makes me different from other people, but as a way for me to share my experiences and kind of connect to others.”

Music by Sapajou “Above,” “The Universe Needs You,” “To Count the Stars”

This story was originally published on El Estoque on March 6, 2021.