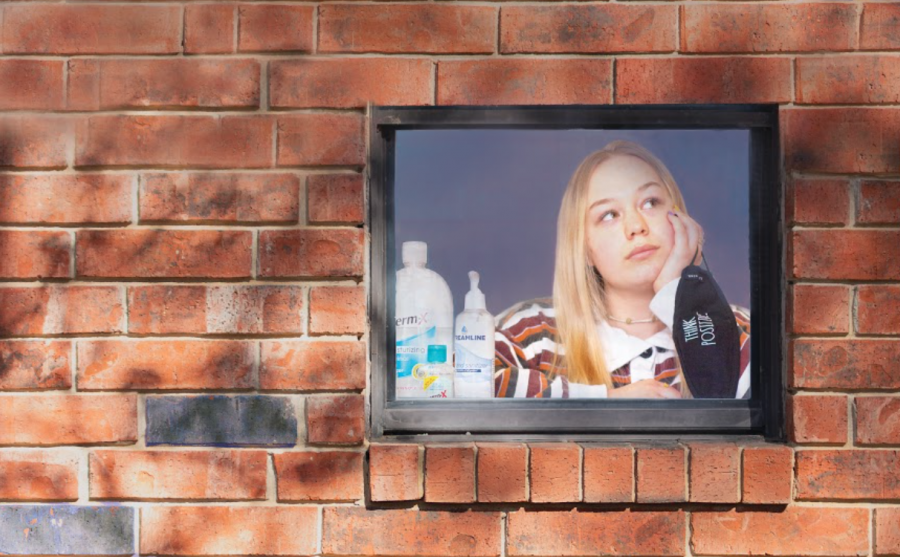 It has been about a year since the COVID-19 pandemic put students' lives on hold, causing an increase in anxiety and loneliness.

By Sophia Craig and Shriya Mukkavilli

The pandemic has taken a toll on students’ mental health. According to a study done by the KFF, a national health polling institution, 56 percent of young adults reported symptoms of anxiety or depressive disorder during the pandemic.

Students went home for spring break 2020 and came back months later, masked and socially distanced. At first, when spring break was extended, many students like sophomore Jordan Mims didn’t think that the pandemic would be a life-altering event.

“I thought we were going to be able to finish the school year,” Mims said. “I didn’t think we’d be in lockdown for an entire year.”

However, many students like junior Kennedy Grogan have gained a new sense of self-awareness and an appreciation for personal health and that of others. In early 2020, Grogan’s mom was diagnosed with cancer. Because cancer weakens the immune system, Grogan was worried about her health and her mom’s, who is a healthcare worker.

“I’m definitely more aware of my personal space and really making sure that I’m healthy and my family members are healthy,” Grogan said.

The rising number of deaths from COVID has also left many students feeling helpless. Student Assistance Counselor Michelle Schwolert said that more students have reached out to her for help. The main issues she’s seen are students experiencing burnout and feeling unmotivated, lethargic and not able to focus.

“I hear these words all the time: ‘I just don’t care,’” Schwolert said. “And so much of it is because our brains are so emotional right now. That’s really leaving little room for our brains to think rationally and into the future about the situation.”
Isolation

Virtual students like junior Emily Jacoby have struggled with not seeing their peers on a daily basis.

“Personally, I like being in an actual classroom and surrounded by people and just having that face-to-face interaction,” Jacoby said. “It’s not really a social connection, like a student to teacher connection. It’s student to screen.”

Sophomore Skylar Cahoone, who is fully virtual, said being away from other people increased her anxiety.

“Sometimes it feels like there’s no one to talk to and you’re kind of alone,” Cahoone said.

In-person students may also struggle with forming connections, according to Schwolert.

“Even though some kids are coming to in-person school, there’s still a sense of isolation with the Plexiglass and not being able to be closer than six feet from a friend at lunch,” Schwolert said.

The issue extends beyond campus as well. Local psychologist Dr. Laura Hart said that she has seen an increase in patients to the point where she has had to turn people down. Hart said that teens are especially vulnerable because they rely more heavily on their peers.

“I think it’s very painful, hugely painful,” Hart said. “It’s a time in our lives developmentally where our peers are maybe the most important influence.”

Hart said even students who have been talking to their close friends are likely to feel loneliness because of the small relationships they lost, such as acquaintances who smile and wave in the hallways between periods.

“Those more kind of higher importance type relationships are still hanging on there,” Hart said. “But the more casual ones have fallen to the side for a lot of people.”
Social media

During the pandemic and the stay at home order, many teens took to social media to fill the gap in their lives, including Junior Emily Jacoby.

“We can’t really do much in person with people,” Jacoby said. “So we feel like we have to kind of escape on Instagram or TikTok.”

Junior Kennedy Grogan said that she had seen different viewpoints on the pandemic through social media.

“It was just kind of frustrating to me that people didn’t believe that the [pandemic] was actually happening or they’re trying to blame certain people,” Grogan said.
Anxiety and depression

Both sophomore Skylar Cahoone and her mother have relatively fragile immune systems. Out of an abundance of caution, Cahoone and her siblings decided to do school entirely virtual this year. However, Cahoone’s entire family still caught COVID-19 in 2020, which gave her immunocompromised mom permanent lung damage.

Cahoone said this has increased her anxiety and fear for her family’s health.

“It was really concerning because we didn’t know how it was going to affect her,” Cahoone said.

Because of the anxiety that students like Cahoone have from the fear of catching COVID and depression that others may face due to isolation, Schwolert said they may not be able to think as clearly.

“I think your brains are just constantly dealing with adjustment and change and the uncertainty of everything, the unknown, feelings of isolation,” Schwolert said. “And that affects your ability to focus and cognitively function like you normally would.”

While students were excited to return to school, many were worried about potentially being exposed to and spreading the virus, including freshman Patton Morgan.

“After being away from society for so long and just in my home, coming back was kind of scary because I didn’t know what to expect,” Morgan said. “Especially going into high school for the first time.”
Looking forward

On March 9, CDC released guidelines stating that a group of fully vaccinated people can gather indoors unmasked. Junior Emily Jacoby said that even though people will be able to gather more safely later this year, she hopes they will still proceed with caution.

“We still need to work through it slowly and just make sure everybody’s staying safe,” Jacoby said. “But I think the first thing people are going to want to do is just spend time with each other again.”

Vaccines are becoming more widely available. On March 29, the vaccine became available for all people 16 and up, which Hart said will help improve people’s mental health.

“As a psychologist, one thing I know for sure about life is that everything changes,” Hart said. “While we might not be sure how things are going to change, I know that it won’t be like this forever.”
Tips for COVID anxiety

1. Bring attention to your breathing, stretch or meditate to relax.

4. Get plenty of sleep. Scientists suggest at least 8 hours of sleep for high schoolers.

5. Drink less coffee or caffeinated beverages if they make you feel jittery.

6. Get vaccinated as soon as vaccines are available to you.

7. Make time to unwind. Read a good book or take a hot bath.

8. Connect with others. Talk with people you trust about your feelings. Even a phone call may make you feel better.

9. Stay connected to organizations that are important to you. While social distancing measures are in place, try connecting online, through social media, or by phone or mail.

This story was originally published on The Marquee on April 12, 2021.