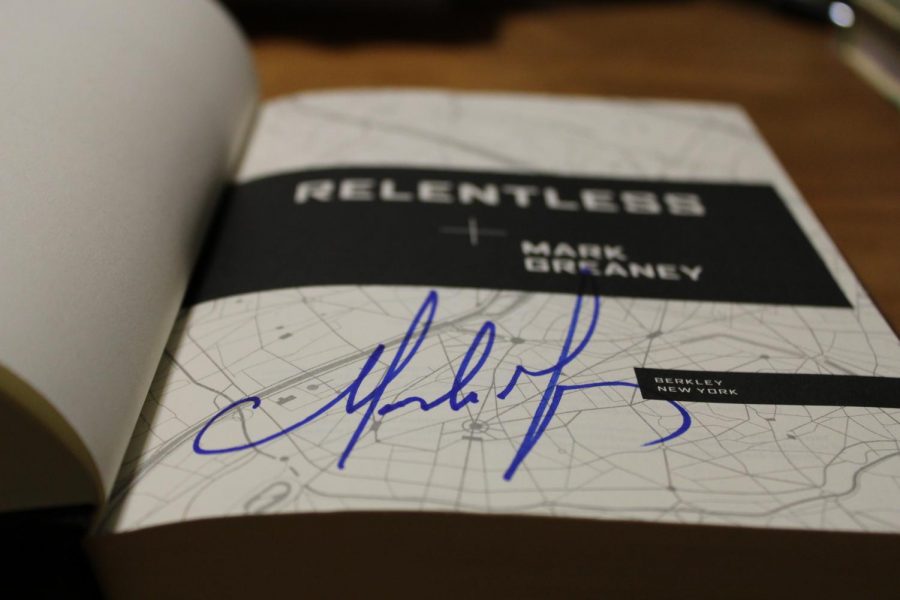 Mark Greaney’s signature on the front page of Relentless, his newest novel which was released on February 16. Special thanks to the staff at Novel for their assistance for this article.

It’s nighttime in Berlin, and a young woman walks down the street. She knows she’s being followed. She knows she’s in danger. Still, she keeps walking, entering a memorial park filled with shadows — the perfect opportunity to slip away. Little does she know the real threat is in the park, and her mysterious follower is her biggest ally.

This is just one scene from Relentless, the newest installment in the Gray Man series by Mark Greaney. Greaney has been a published author for 12 years, beginning with The Gray Man, the namesake of the series. Before he made it big, however, Greaney was a student who roamed the halls of White Station High School. Greaney graduated from WSHS in 1985, and he still remembers his time as a Spartan.

“I spent so much time in the library at White Station, I mean, just my nose in a book at the library every chance I would get — study halls or between classes or free periods and stuff … ” Greaney said.

Eventually, Greaney switched from reading books to writing them. The Gray Man series, which contains 10 books with more on the way, follows a former CIA operative named Court Gentry. Gentry is a combination of James Bond, Ethan Hunt and MacGyver, yet has a unique nature all his own. The series itself has it all — action, intrigue and a twisting plot.

Relentless is no exception to this precedent. The novel holds plenty of fear-filled moments and suspenseful page turns. The story shadows Gentry as he travels from Venezuela to Germany in order to protect a fellow spy, as well as uncover an international plot that would have disastrous consequences. In short, the United Arab Emirates, exploiting an agreement with the US that requires the US not to spy on the UAE, is trying to spark a war between the US and Iran. How? By encouraging a terrorist attack on the US presence in Berlin, Germany and blaming it on Iran. This scheme doesn’t go as planned once Gentry is thrown into the mix as he and a few associates strive to stop the UAE from starting any conflict.

The action in Relentless is constant and captivating. Gentry and his colleagues are highly-trained individuals who get into — and out of — phenomenal situations, but Greaney makes sure to keep all the fighting plausible. Throughout the book, the action keeps the reader interested and surprised, which is exactly what the author wants.

“…[T]he biggest part is keeping it fresh and keeping it different because this Gray Man that just came out, Relentless, is my 10th Gray Man novel — it’s my 20th published novel — and I’m obsessed with never doing the same thing twice,” Greaney said. “I don’t want to be one of those washed-up, old authors that is just phoning it in to get a paycheck, and I’m always trying to find something new. So that’s my problem now, my constant concern.”

Similar to the action, the plot of Relentless is unique. Since Greaney writes using third person point-of-view, the reader is able to see events from multiple perspectives. There are many instances of suspense created by the reader’s knowledge of something the characters know nothing about. Even before reading the book, the main idea for Relentless poses an interesting question.

“I read a lot of books [to research],” Greaney said. “[For] Relentless, I was reading a lot of open-source, CIA documents about our relationship with the United Arab Emirates and spying … that’s where a lot of my ideas came from — I found out that the US has an agreement with the United Arab Emirates to where we don’t spy, we don’t collect intelligence on that nation because they’re an ally of ours … the author in me is always asking ‘What if?’ and I was like, ‘What if that came and bit us in the rear end, that decision?’ so that’s the beginning of the book.”

Finally, the characters of Relentless are all well-written, their personalities firmly established within the first couple of chapters of meeting them. While the characters don’t undergo much character development, they are dynamic characters to begin with, so it was easy to overlook. Greaney came up with the idea of the main protagonist while studying abroad.

“… I went to Guatemala to study Spanish …” Greaney said. “And one weekend, I was taking some time off … and I was sitting in a bar in El Salvador … and an American came in the bar, and he sat in the corner, and he turned the light off that was right there next to him in the bar so where nobody could see him, and he kind of sat there by himself … So I was just sitting there eating my dinner, and I came up with a whole story about this guy: that he’s a CIA officer, but the CIA is trying to kill him so he has to live in a third world [country], off-grid, and what does he do for a living in the meantime? Well, he’s still a good guy, he doesn’t know why the CIA is after him so he’s basically working as a private contract killer but only going after bad people. So I just came up with that whole thing while I was sitting there, I never talked to the guy or anything, and I started writing the book the next day, really.”

Not only have Gentry and his adventures caught the attention of thousands of readers, but they’ve appealed to streaming platforms. Netflix announced that a Gray Man movie is in production with actors Ryan Gosling and Chris Evans to star.

I would definitely recommend this book and every book in the Gray Man series. Relentless provides readers with a fascinating story that meets and exceeds the expectations of the series.  The book’s positive reviews, such as 4.7/5 stars on Amazon, support this.

“I’ve been really, really pleased,” Greaney said. “This book has done really well. It hit number four on the New York Times Bestseller List. The sales are better than last year’s which with COVID, that’s a good thing, and everybody’s happy with how it’s done.”

This story was originally published on The Scroll on April 9, 2021.