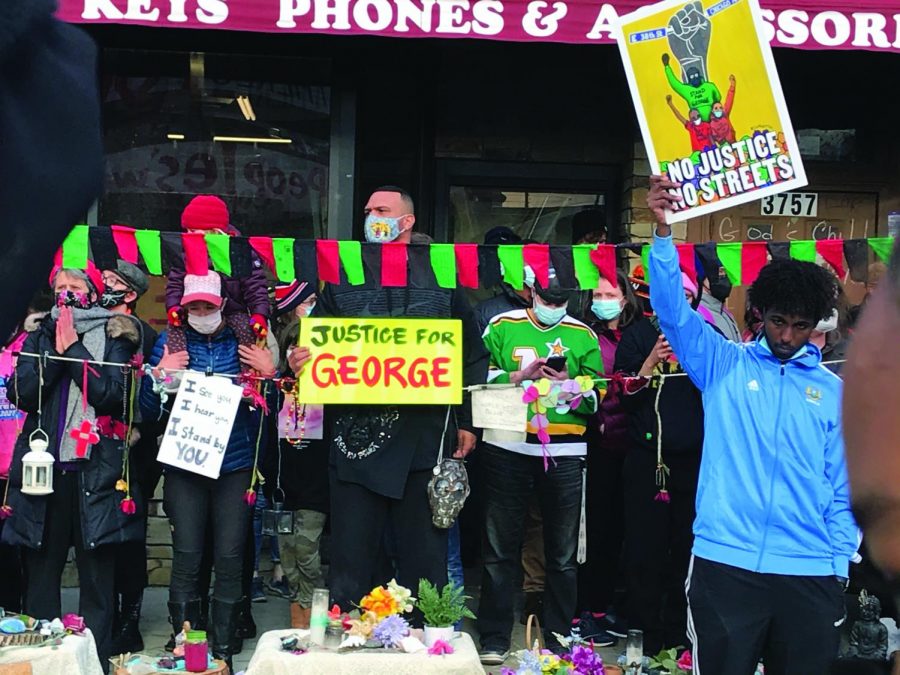 People gather at George Floyd square paying respects and celebrating after former police officer Derek Chauvin verdict. Chauvin was found guilty for the murder of George Floyd and was convicted on all three charges brought against him.

Chauvin guilty on all three counts

Sitting on the bus on her way home from school, sophomore Saynab Mohamed didn’t know what to expect as she listened to the verdict of Derek Chauvin being announced. Mohamed said she didn’t have her hopes pinned on Chauvin’s conviction in fear of being let down.

“It’s better when you don’t get your hopes high because when the results are bad, then you’re not so disappointed,” Mohamed said. “But when I had my hopes down, and then I heard the news, I was really happy about it.”

According to CNN, former police officer Derek Chauvin was found guilty for the murder of George Floyd and was convicted on all three charges brought against him by the state of Minnesota: second-degree murder, third-degree murder, and second-degree manslaughter. The verdict was reached after three weeks of witness testimony and over ten hours of deliberation by a sequestered jury.

Chauvin’s actions gained national attention after a video was released in which Chauvin kneeled on George Floyd’s neck for over nine minutes during a police interaction May 25, 2020. After watching the video, freshman Calvin Zimmerman said it made him upset to see people blaming Floyd’s death on other factors.

“It hurt a lot to see everyone trying to say that fentanyl killed George Floyd, we saw what happened, we know the truth, but yet you’re still making an argument that something else might have killed him and not a human being,” Zimmerman said.

While she wanted Chauvin to be convicted, Mohamed said she wasn’t expecting a conviction on all three counts due to the justice system’s past treatment of police-related cases.

“It’s what should have happened, it’s what I should have expected but sadly it wasn’t,” Mohamed said. “There’ve been so many cases that have just been thrown away, or the police officers weren’t found guilty because they’re a police officer.”

Immediately after the verdict was read, Chauvin’s bail was canceled and he was taken back into custody. Sentencing is expected to occur in eight weeks. Junior Truman Fillbrandt said he is hoping Judge Peter Cahill does not spare Chauvin with a light sentence.

“It was definitely the verdict I wanted,” Fillbrandt said. “Now I just kind of hope the sentencing is as harsh as it can be.”

Seeing Chauvin’s stoic reactions in the courtroom, Mohamed said she is not surprised by his choice not to testify throughout the trial, believing that he has no remorse for his actions.

“He knew that there was nothing he could say to justify what he did,” Mohamed said. “He knew that if he even tried to say something he’d make it worse.”

According to Zimmerman, Chauvin’s trial exposes a larger issue within the justice system of using past drug use as an excuse for non-conviction, as opposed to focusing on the real cause of death of cases like George Floyd.

After seeing the nationwide recognition of Chauvin’s action and his trial, Fillbrandt said he would like to see a similar spirit put towards lesser-known civil rights cases.

“I want to see some form of fundamental change because I feel like the only reason we got this far is because there was so much media attention and national spotlight on the case,” Fillbrandt said. “If people hadn’t filmed it, or if people hadn’t cared, then it wouldn’t have gone to trial, and even if it did, it probably would have been an acquittal or a hung jury.”

While Zimmerman said he believes celebration is appropriate in light of the verdict, he doesn’t want national attention towards civil rights to taper off just because one trial ended in victory.

“The danger in losing that momentum is we go back. We go back to where people start becoming more ignorant, not to say that people aren’t ignorant right now, we still have a lot of ignorance in the world,” Zimmerman said. “But once we lose that momentum, it’s hard to start it back up again because people tend to not care.”

Satisfied with the verdict, Fillbrandt said he believes this is the outcome of hard-fought change within Minneapolis as well as nationwide.

During the trial, Zimmerman said what upset him most was the smearing of George Floyd’s image and the martyrizing of Derek Chauvin by defense lawyer Eric Nelson.

“George Floyd was a father, you know he has a family too, but yet they wanted to focus on his addiction, which is completely wrong when it’s clear that Derek Chauvin killed him,” Zimmerman said. “Hearing the defense actually trying to put up a fight really hit me hard because they don’t want this man to go to jail, and all the defense cares about is getting a paycheck at the end of the day, they don’t care who they’re representing.”

Moving forward, Mohamed said she wants justice for others killed by police, and Chauvin’s conviction is one of the first steps in the right direction.

“There’s a lot of victims that have been affected by police brutality,” Mohamed said. “I want justice for them too. This is just the beginning.”

This story was originally published on The Echo on April 22, 2021.