The end of the rainbow

In 2021, the Iowa legislature proposed a record-breaking number of bills targeting the LGBTQ+ community, a precedent that has far-reaching consequences for the state’s future. 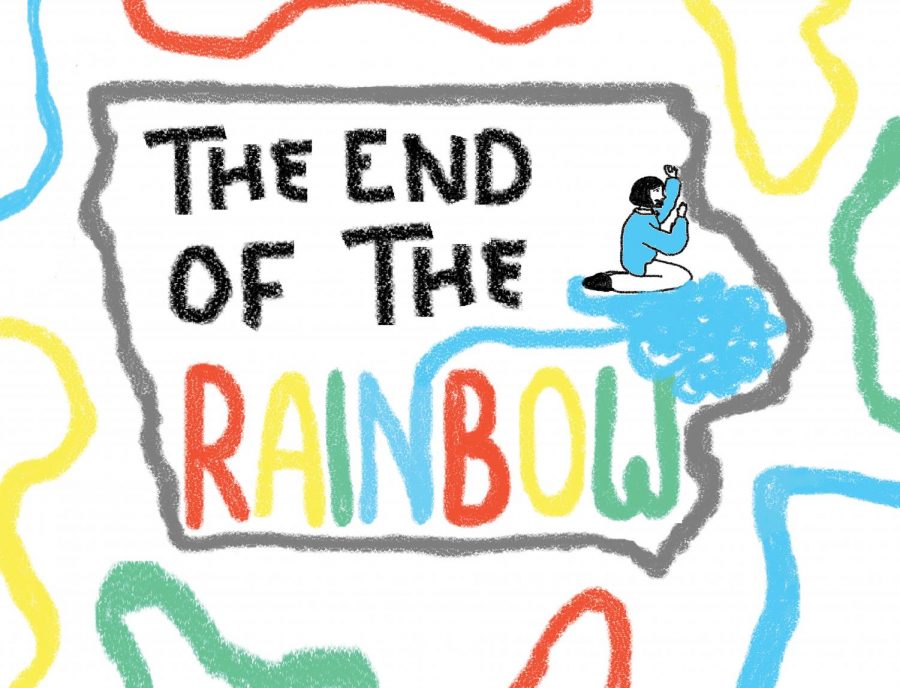 In recent months, a series of anti-LGBTQ+ legislation has been introduced in Iowa.

By Caroline Mascardo and Ella Rosenthal

The rainbow is fading.

Like many other states in the country, the Iowa Senate and House of Representatives saw the introduction of a historic number of anti-LGBTQ+ bills. These bills range from intrusive transphobic “bathroom bills” to restricted teaching on gender identity to removing the transgender community from the Iowa Civil Rights Act.

As members of the LGBTQ+ community, we are already familiar with the homophobia and transphobia that these bills seek to normalize. These efforts to promote discrimination remain unacceptable and horrifying, leaving a stain on Iowa’s reputation of friendliness.

Luckily, all proposed legislation failed the first funnel deadline March 5, so there will be no further discussion for passage by either legislative body. Despite this marginal victory, these outrageous proposals have already set a disturbing, dehumanizing precedent for the treatment of LGBTQ+ Iowans.

While Iowa was one of the first states to legalize gay marriage in the country, progress toward establishing other legal protections for the LGBTQ+ community has since been stagnant — and even counteractive. Notably, the state touts an HIV criminalization law while lacking a conversion therapy ban, protections for intersex Iowans and access to transgender healthcare. This hostile environment can be attributed to the balance of political power in Iowa’s government, where the connection between the Republican Party and promoting anti-LGBTQ+ legislation is undeniable.

The GOP has continued to state that “marriage and family, based on marriage between one man and one woman, is the foundation for a free society” on its official platform. Unsurprisingly, no Republican leaders have condemned any of the recent bills targeting the LGBTQ+ community.

In Iowa, attitudes toward anti-LGBTQ+ legislation are starkly divided along party lines, with Republicans in favor and Democrats in opposition. The Republican Party also controls the entirety of Iowa’s legislature, meaning they are the majority in both the state senate and state house while occupying the governor’s position — a Republican “trifecta.” With an overwhelming majority in both law-making bodies, Republicans can more easily introduce and maneuver their bills through the legislative process.

Growing up in Iowa City has shaped how we see the rest of our state, a place that seems to aim for the hateful result of discriminatory homogeny. As we have grown and learned more about the political differences within the state, polarization has become easily distinguishable through visits to conservative areas. There, we must censor ourselves through all forms of self-expression to prevent the hatred these bills would reinforce.

Amid this formidable red sea, Iowa City is a blue island and a haven for the LGBTQ community. Although Democrats only comprise a third of active Iowan voters, they accounted for over half of Johnson County’s voting population during the 2020 election. This makes Iowa City the most Democratic and LGBTQ-inclusive place in the state, having earned a perfect score for LGBTQ+ inclusion from the Human Rights Campaign for the seventh consecutive year. The city has also elected Mayor Bruce Teague, the second openly gay mayor in Iowa history.

The jarring, polarized divisions between blue and red ideals has compelled some Iowa City residents to take action by speaking up at subcommittee meetings, attending protests, supporting their local LGBTQ+ community and contacting their representatives. However, no matter the outcome of these bills or the effort put into stopping them, the message from the Iowa legislature rings clear: the LGBTQ+ community is not welcome here.

Despite dedicated advocacy efforts, the Iowa legislature’s structure ensures minimal criticism on anti-LGBTQ+ bills. Bills are delegated to a subcommittee after they are introduced, and since the GOP maintains a two-thirds majority in both the House and Senate, each three-member subcommittee is facilitated by one Democrat and two Republicans. During public subcommittee meetings, community members provide input on the proposed law, but those opposing the bill are powerless. In several subcommittee meetings, Republicans have been quick to indirectly silence opposing viewpoints, many of whom are LGBTQ+ youth who would be directly impacted by this legislation.

As if these proposed bills are not detrimental enough to LGBTQ+ students, attempting to protect our rights has proven to be virtually ineffective. We have been lucky enough to attend a few of this year’s legislative subcommittee meetings, but they are often scheduled inconveniently with less than 24 hours notice and during school hours. There, few community speakers spoke in favor of the bills, but their opinions were clearly prioritized by leading subcommittee members. Some speakers claimed to fight indoctrination and “gender theory activists,” hiding behind misconstrued reasoning paired with offensive word choice, showing a total disregard for whom the bills would restrict. In closing remarks, the Republican senators continued patterns of disrespectful language before signing the release form in front of all attendees. By refusing to listen to those directly affected by the proposed legislation, the Iowa government discourages their participation in the legislative process. This reflects the solidified and more grandiose image of queerphobia and hatred that these bills represent.

Anti-LGBTQ+ bills cause more than just surface-level damage; they create trauma and contribute to a climate that is exclusive of the LGBTQ+ community. According to a study from the Baylor College of Medicine, traumatic experiences in childhood and adolescence have detrimental effects on long-term mental and physical health. LGBTQ+ youth are already at a greater risk than their same-age peers of experiencing a variety of traumas, including harassment, abuse, institutional discrimination and microaggressions. The American Psychological Association also categorizes growing up in a pervasive, heteronormative environment — where LGBTQ+ identities are punished — as another type of trauma. Additionally, LGBTQ+ youth are more likely to have unmet mental health needs but lack access to high-quality, culturally appropriate care.

Bills like SF 224, one of three bills that would restrict transgender bathroom access, have little historical support and would instead negatively impact transgender youth. “Bathroom bills” are often justified by the reasoning that women need to be protected, but in a study of four states by the Police Foundation, researchers found no evidence of sexual assault cases where a man acted as a woman to victimize women in a restroom. Additionally, a study by Harvard demonstrated that when transgender bathroom bills were in place, the rate of 13 to 17-year-old transgender children that reported having been sexually assaulted in the past year jumped 10% — from 26% to 36%.

Although unpassed, this queerphobic and sloppily written legislation has damaging consequences, not only for the LGBTQ+ community but Iowa as a whole. Definitions of LGBTQ+ keywords in the bills, like gender and sexual orientation, are inaccurately vague, removing even binary gender equality.

The proposed bill SF 167 prohibited gender identity-related curriculum without parental consent. On the surface, this bill expands parental involvement at the cost of student access to education about their peers. The inaccurate, broad use of the term gender identity leaves the bill at risk of being interpreted as preventing anything relating to feminism, sexism or gender from being discussed. While discussing these incoherent, disrespectful bills during subcommittee meetings, right-wing legislators frequently confuse basic yet crucial terms needed to discuss LGBTQ+ issues, especially for politicians trying to change our civil rights. This sets an even further reaching precedent of widespread discrimination in Iowa.

Religion is another commonly cited excuse for prejudice; a new Religious Freedom Restoration Act bill permits the discrimination of LGBTQ+ Iowans under the veil of faith, effectively bypassing the 2007 Iowa Civil Rights Act. It should go without saying that this endangers everyone by creating literal legal loopholes. While these specific bills happen to directly affect more than the LGBTQ+ community, it is important to note all proposed bills were similarly motivated with the same broadly destructive intentions.

Furthermore, the bills create a grim cycle of diversity drain, a longer term problem that is harder to recover from. During brain drain, individuals leave an area seeking a better life and more opportunities. As more and more talented, educated individuals depart, their absence harms the community over time. In an Iowan study about brain drain, researchers found that there is already a detrimental emigration of college-educated individuals who left in search of certain “desired community features.” Applying that to the LGBTQ community and its allies, this will mean after years of trauma from Iowa’s discriminatory legislation and prejudice, many LGBTQ+ adults will flee the state, looking for fair treatment. Meanwhile, LGBTQ+ youth are left with fewer safe, supportive spaces and role models as they grow up. The Iowa LGBTQ+ community will shrivel and the state will grow more uniform in its inaction and exclusion as Republicans gain more political power. After time, fighting against this legislation will prove nearly impossible, pushing even more LGBTQ+ individuals out of the state. This cyclical pattern will leave those who can’t leave traumatized and starved of acceptance, drowning in Iowa’s unforgiving red sea.

Regardless of political affiliation or religion, this heinous treatment of the LGBTQ+ community is unacceptable. Although these recent bills have failed, we cannot watch the Iowa legislature continue to strip LGBTQ+ youth of their identity and rights. We cannot expect LGBTQ youth to fix these problems themselves either, as it disregards the trauma these bills inflict. All of us must make a sustained effort to ensure the inclusion of all, whether in the Iowa legislature, our classrooms or the state at-large — Iowa’s future depends on it. By doing so, we can bring the vibrant rainbow of pride back to Iowa.

This story was originally published on West Side Story on April 23, 2021.