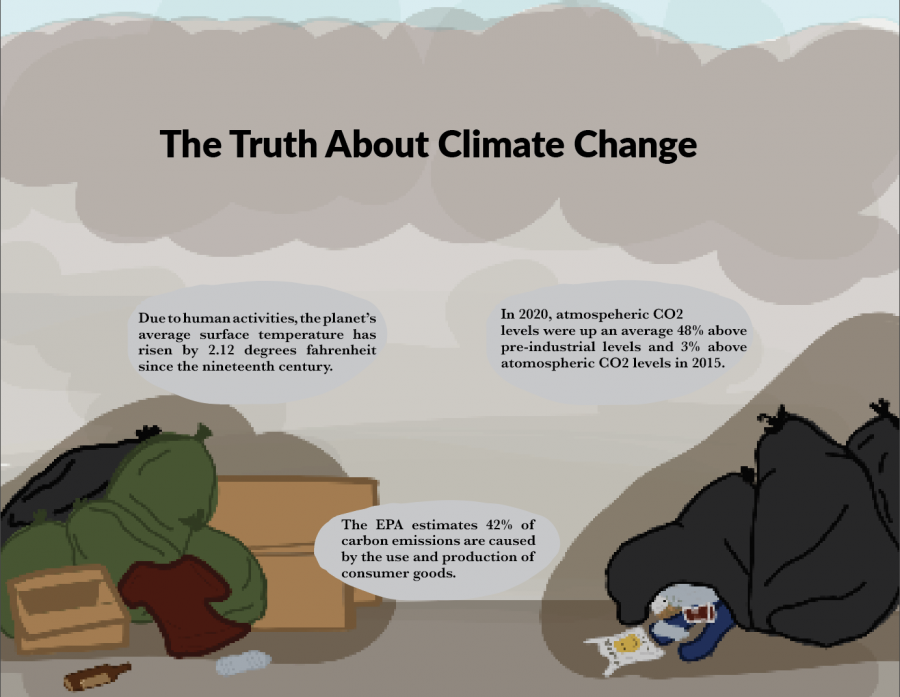 Rising tides. Forest fires. Extreme heat. All of these have sadly become such regular occurrences in our world today that we think little of them. However, they are prime examples of a real problem plaguing our world as we speak: climate change.

The primary cause of climate change is the increase of carbon emissions into the atmosphere due to agriculture, transportation, and several large industries across the globe, warping the polar vortex and causing cold air to head south while warm air heads north. To combat this, people on the internet have started movements of reshaping their lifestyles to become more sustainable and reduce their carbon footprint*. One of the most prevalent of these is the zero-waste movement. As it states in its name, the main focus of this movement is to live your life producing almost no waste so that your impact on the world and therefore climate is practically nonexistent. Sophomore Allie Raines, the co-president of the Francis Howell Central’s Environmental Club, described how society currently treats waste when it comes to disposal and how the movement of zero-waste is trying to fight it.

“Right now we live in a linear system,” Raines said. “We buy, we use, we send [waste] to the landfill. Both [zero-waste and other sustainable lifestyles] want to change it to a circular system, where we limit or eliminate the landfill.”

A common misconception that many people make is that we can create change to the environment without having to sacrifice any aspects of our current lives by doing simple acts like recycling. Though recycling does make a difference, it can only do so to an extent. Senior and other co-president of the Environmental Club, Sarah Skelly, explained the difference between recycling and living zero-waste. 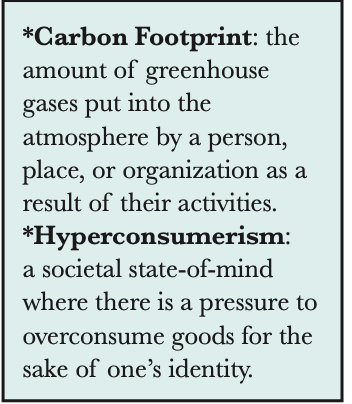 “When you recycle or even just cut down on plastic consumption, you are only reducing your impact rather than completely bringing it to zero,” Skelly commented. “Certain materials can only be recycled a few times, so it ends up being waste in the end anyways.”

Environmental science teacher Mrs. Kellie Staback mentioned how zero-waste living as opposed to a simple act like recycling can be more beneficial in the fight to save our planet.

With the amount of hyper-consumerism existent in today’s society, trying to buy items often are associated with fads contributes to a lot of our waste. People have a tendency to buy these items in bulk, only to throw them out less than a year later. In addition, the rise of online shopping and websites like Amazon have contributed to the rise of hyperconsumerism*. Raines discussed how online shopping has influenced our consumption rates.

“People in general… are most likely held back [from sustainable lifestyles] by the ease of the generation,” Raines discussed. “You click a button and you receive a package less than 24 hours later. This means people don’t think of what they buy [leading] to unnecessary purchases that are never fully used, and ultimately, thrown out. Not only is the product going to a landfill, it wasn’t used to its full potential either.”

The increase in cheaply made products to  promote trends is one example of hyperconsumerism in modern society contributing to a major portion of our waste, especially among adolescents. Not only has this hyperconsumerism contributed to waste, but also a change in society’s mindset towards how much money should be spent on certain products and how much of an item one should possess.

This ideology has been what a lot of major contributors to the zero-waste lifestyle movement have been trying to fight against.

With that being said, sometimes aspects of zero-waste are just not attainable for students. Some students are not able to save up to buy zero-waste alternatives because they have to use their money for other needs. For some it is just not accessible due to lack of internet or stores selling products. Raines mentioned how for adolescents especially, going zero-waste is difficult as they often do not have a say in the products their household uses.

“It is hard to control your own life,” Raines said. “The food you eat is bought by the people you live with, the house groceries too. You can not control the amount of plastic that enters your home. If your family members refuse to recycle, there is not much you can do about it.”

Even though the goal of zero-waste is simple, the majority of people will never be able to fully achieve living completely-waste free for a variety of reasons. However, a major difference could be made in our environment if people would just make small changes in attainable areas of their lives. Even if it is simply using a reusable water bottle instead of a plastic bottle, that’s still plastic being saved from landfills.

“A lot of people think it is an all or nothing concept,” Mrs. Staback described. “Yet if you can make one positive change towards a zero-waste lifestyle, this is a step that matters. We have gotten so comfortable with the way things are that we are afraid to make changes. I think people just need to try it, and if it is just baby steps at first, then that is better than nothing.”

If everyone comes together to change at least one part of their life to produce less waste, whether that be thrifting your clothes or buying a bamboo toothbrush, we may actually be able to save our planet and ourselves from total destruction. 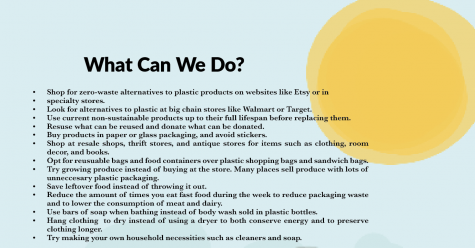 This story was originally published on FHC Today on April 28, 2021.