The Senior Night highlights from Unified Track and Field, one of best-kept secrets of Dallastown Athletics.

The Dallastown Unified Track team has a team huddle after their victory over Susquehannock at Senior Night on April 28. Dallastown currently has two unified teams: bocce in the winter and track in the spring.

The Dallastown Unified Track and Field team is sponsored by the Dallastown Area School District in partnership with Special Olympics Pennsylvania. Unified Sports is a fully inclusive and co-ed high school sports program that brings together students with and without disabilities on teams for training and competition. Players and partners work together in the spirit of competition to grow and improve as athletes and teammates. The Dallastown Unified Track and Field team recently celebrated their 2020-2021 Senior Night in the American Legion Stadium on Wednesday, April 28. The Wildcats took on the visiting Susquehannock Warriors. Photo by Staff. 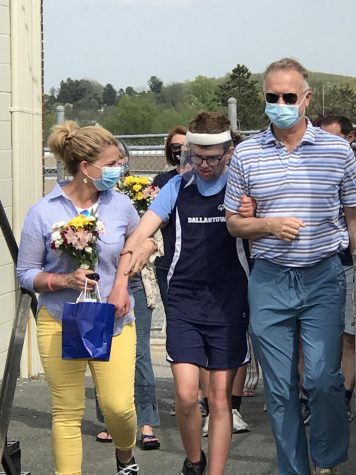 The first senior of 2020-2021 to be announced was Jonathan Melby, son of Suzanne and Eric Melby. Melby is a part of the Unified Bocce team as well as the Unified Track and Field team at Dallastown. Mentioned at the meet, Melby’s favorite Unified Track and Field memory is from his first track meet when all of the sudden everyone started cheering him on and calling him by his name as he was running – it was amazing! According to Melby, the support was and is incredible. Photo by Staff. 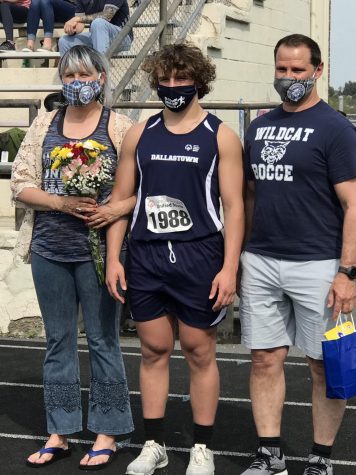 The second senior announced was Brooks Gable, son of Deb and Dave Gable. This is Gable’s third year on the Unified Track and Field Team, and he also is involved in Special Olympics Tennis. Gable’s post-graduation plans are to attend the United States Air Force Academy in Colorado Springs, Colorado. Mentioned at the meet, Gable’s favorite Unified memory was beating Central at Central. Photo by Staff.

The final senior for the 2020-2021 season was Myra Striebig. Striebig was going to be escorted by Matt Striebig, Bethanie Lloyd, and Jill Striebig, but she was unfortunately in quarantine during the meet. This is Striebig’s second year on the Unified Track and Field Team, and she also is involved in the Girls Soccer team, Bowling Club, and the FC Ballyhoo soccer team. Striebig’s post-graduation plans are to attend the Shepherd University. Mentioned at the meet, Striebig’s favorite Unified memory was “racing Tyler in the 100.”

In addition to the three 2020-2021 seniors, two senior members of last year’s 2019-2020 team were recognized. The first of the two is Danika Moose, daughter of Kristen and Todd Moose. Moose is currently attending Clarion University while majoring in Special Education, but she decided to come back to help coach because she wanted to come back and see and help all of her old teammates. Mentioned at the meet, Moose’s favorite Unified memory is how she was blown away from the love and acceptance this team has had since we started. Photo by Staff. 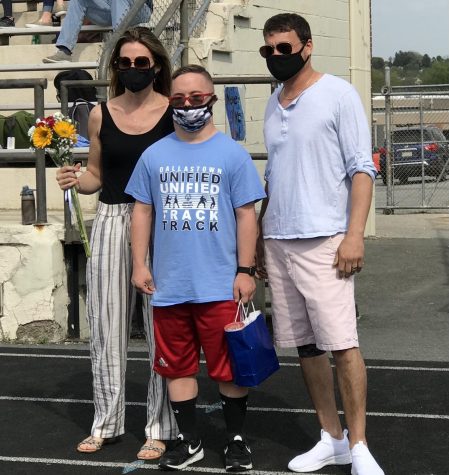 The second member of last year’s team to be recognized is Tyler Zahos, son of Erica and George Zahos. Zahos is currently attending Penn State University while majoring in Career Studies, but he decided to come back to help coach because he likes Track and seeing his coaches and friends. Mentioned at the meet, Zahos’ favorite Unified memory is riding the bus to the track meets and throwing the javelin. Both Moose and Zahos were volunteer coaches for the 2020-2021 season. Photo by Staff. 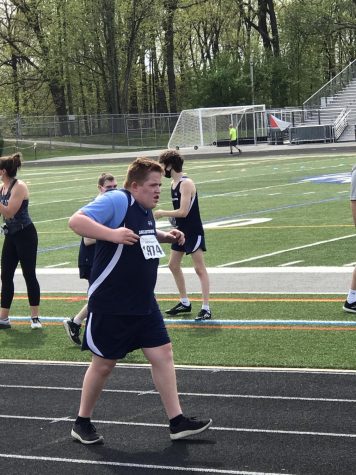 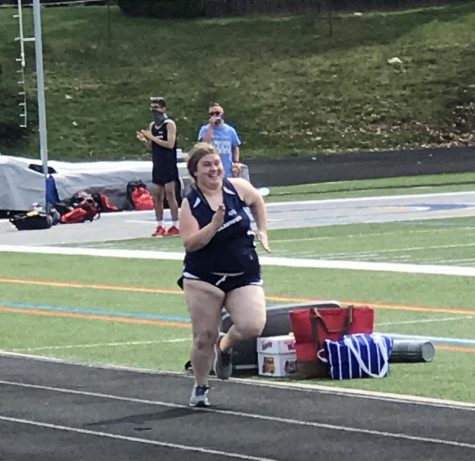 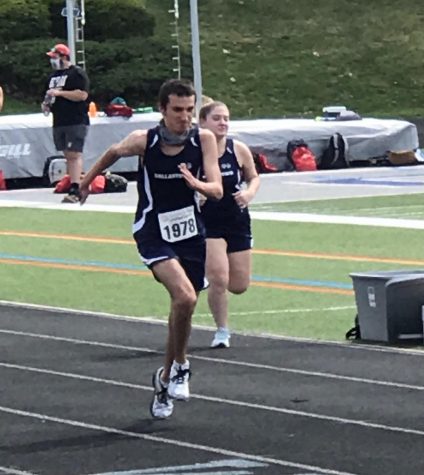 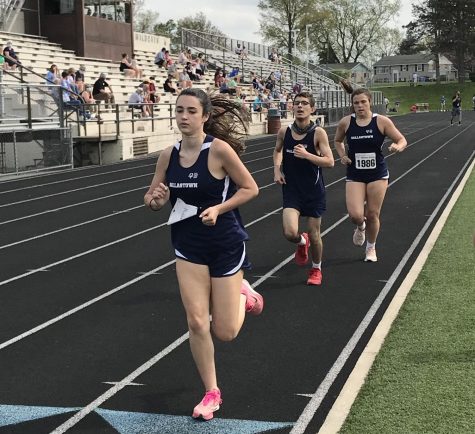 Dallastown Unified Track and Field teammates (from above picture left to right) Christian Muzon, Langley Brockway, and Maddie Beecy all pose for a picture before running the 800-meter dash together. Photos by Staff. 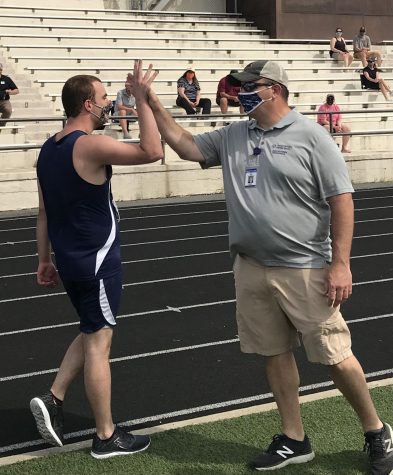 Hunter Smith high-fives Mr. Kevin Myers after Smith competes in an event. Smith attends York County School of Technology rather than Dallastown, but he runs the 400-meter dash and the 4×400 relay and participates in javelin for Dallastown Unified Track and Field team. 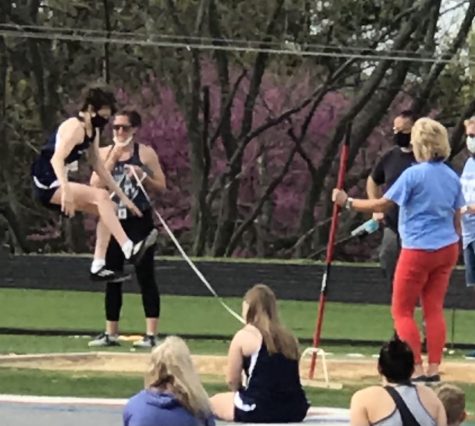 Graham Turnbull, a freshman on the Dallastown Unified Track and Field team, participates in the long jump. Team members must participate in one of three field events: long jump, shot put, or javelin. 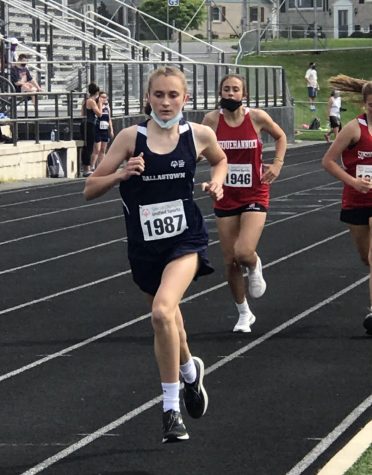 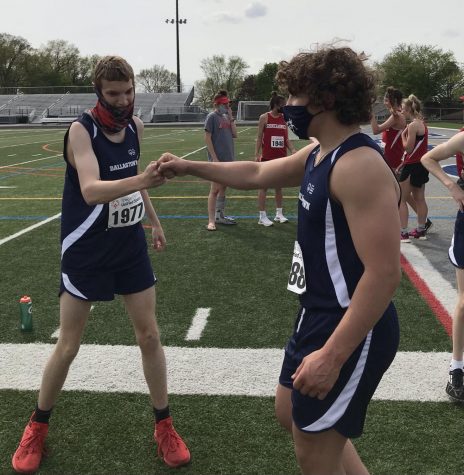 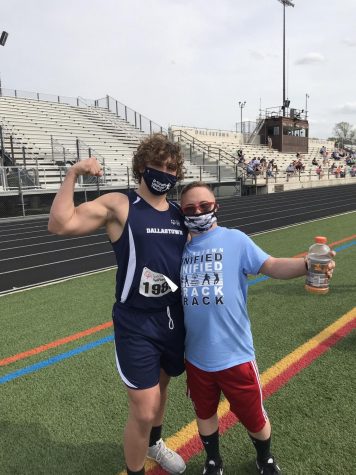 Brooks Gable encourages his teammate Login Ruby (above) and poses with Tyler Zahos (below) during the meet. Zahos was a part of last year’s team and is a volunteer coach for the 2020-2021 season. 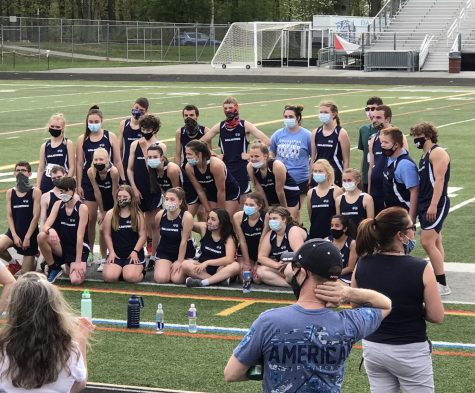 This story was originally published on The Beacon on May 10, 2021.