Drum Roll Please for the Only Drummer in Pop Performance, Sky Jaan 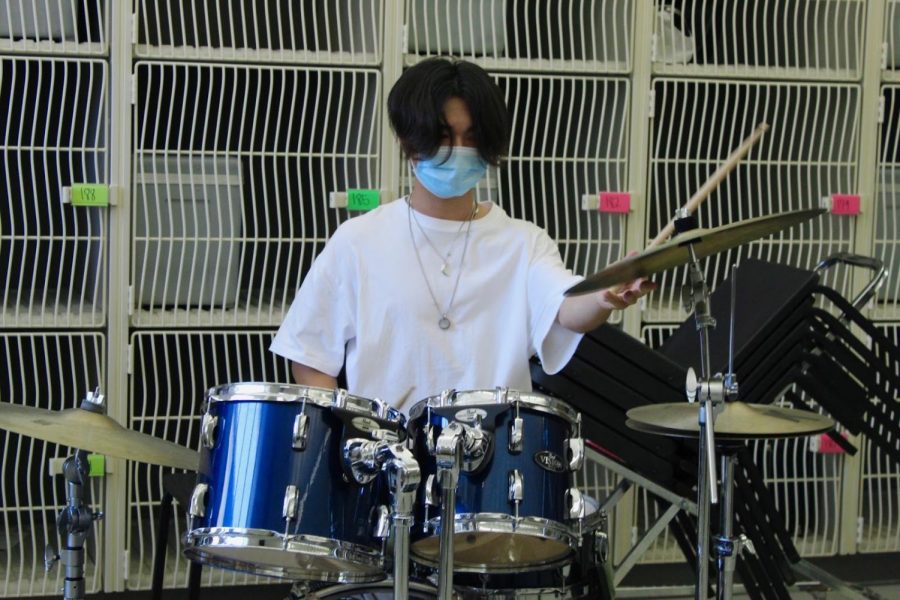 Immediately after the count, Pop Performance drummer and sophomore Sky Jaan, the only drummer in Pop Performance, opens the musical piece with the hard beating of tom-toms, which are soon joined by the clangs of cymbals.

The song transitions into its chorus as the wooden drum sticks bounce on and off the drum head, which is dented and dirtied by hours of practice leading up to this moment. With a gentle rattle of the hi-hat that mimics the sound of heavy rainfall, Jaan finally concludes the rock rhythm.

Imperial Circus Dead Decadence, a heavy metal J-pop band, has been a favorite of Jaan’s since his middle school years. Inspired by the intense and vigorous style of the band’s drummer Shuhei Kamada, Jaan started experimenting with drumming in eighth grade.

After entering high school, Jaan pursued his musical passion by taking Guitar 1 as a freshman and Studio Music during the first semester of this year. Jaan was recommended by music teacher Kyle Traska to advance to the more rigorous course after the only drummer in Pop Performance unexpectedly departed.

Being the newest member in Pop Performance, Jaan faces much pressure to play every song with precision and perfect rhythm. As the group’s “human metronome,” if he were to make a mistake, it would be the first thing the audience would notice, according to Pop Performance guitarist and junior Cody Maier.

“He is super hard working,” Maier said. “For every song we have done, he has worked three times as hard, putting three times as many hours practicing than everyone else does.”

Jaan’s goal since middle school — performing live in front of a large audience — is what motivates him to practice every day for two to three hours, according to Jaan. But earlier this month during Fine Arts Week, Jaan was finally able to make his dream a reality when he played live for the school alongside the rest of Pop Performance.

Reflecting on the biggest takeaway from his nearly three-year drumming journey, Jaan states that “hard work will be seen.”

“Seeing myself from almost two years ago, it surprises me how far my work has gotten me,” Jaan said. “You just have to practice every day, and you gradually get better. You won’t even notice that you’re getting good until you take a moment to reflect, and that’s when you notice, ‘Oh wow, I’ve come this far.’”

This story was originally published on Portola Pilot on May 11, 2021.