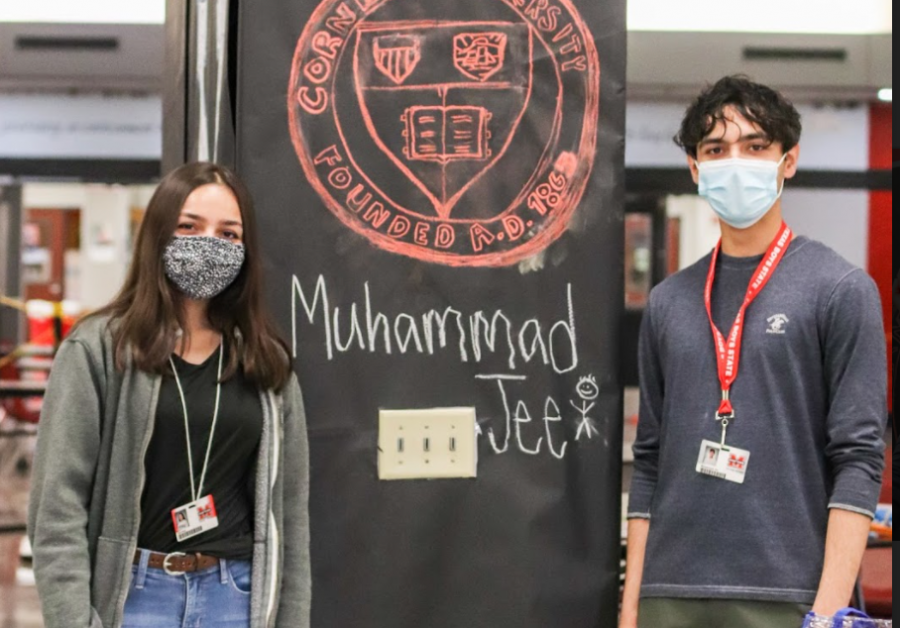 Senior twins Alsa Khan and Muhammad Jee attend the senior signing event in the cafeteria. Alsa has been involved in Student Council, while Muhammad was on the track team.

But only 10 seconds into their interview, Alsa proudly labeled herself as older. Five minutes older, to be exact.

Muhammad was quick to say he didn’t like it.

Four minutes later, Alsa giggled when asked if they ever bicker.

“I had to remind him like five times for the interview today,” Alsa said. “Like, ‘Get ready. Have you done this? Do you have your ID?’”

Muhammad cut off his sister.

“Living in a household with three sisters, all the responsibility of a brother teasing his sisters lies only on my shoulders,” Muhammad said. “So I try to do a good job and make sure that they’re always running around.”

They sounded like every pair of siblings, constantly switching between hot and cold, going from reminiscing on their huge birthday parties as kids to complaining about who got the bigger room.

But the one thing that separates the recording of their voices from every other pair of siblings on campus is their accent, reminiscent of the nearly 8,000 miles between them and their first home.

Alsa and Muhammad were born in Lahore, Pakistan to a family of passionate entrepreneurs. Their family moved around often to chase business opportunities throughout their childhood. They were only a few weeks old when their family moved to Singapore so their parents could attend college.

But even as 1-year-old babies, Alsa and Muhammad had a special bond.

“There’s a picture of us as kids, as twins, and she’s feeding me the milk with the [bottle],” Muhammad said. “And there’s another video of us playing with this toy, and she’s scared of it. It was a bunny, and I came in and I grabbed the tail of the bunny and hit the bunny, so we support each other in different ways, even as kids.”

After four years, they moved back to Pakistan and lived in Lahore, Karachi and Islamabad.

“We literally changed schools practically every year, so we were used to shifting around and adapting to different situations,” Muhammad said.

However, Pakistan was home during their early years.

“Both of our grandparents, our dad’s family and our mom’s family, were living in Lahore, and then we had a house there too,” Alsa said. “So it was really, really fun because we had all our cousins or uncles, aunts in the same place.”

Alsa and Muhammad settled into a routine in Pakistan, and it seemed like they were done moving. They spent time with their friends and tried different activities, from playing the flute to gymnastics and roller skating.

“We were blessed with a really good life in Pakistan, and we had great education there as well,” Muhammad said.

So they didn’t think much of it when their dad took business trips to America every few months. But what they didn’t know was that he was building a healthcare technology business, and at the beginning of their fifth grade year, their parents quietly began planning to move across the ocean.

Alsa and Muhammad didn’t find out that they were moving until a few weeks before. They had moved often, but this time was different.

“We felt kind of sad, because that was the best time of our life,” Alsa said. “We loved our friends. I was crying, but I was excited at the same time, because I love change.”

If their life in Pakistan was a puzzle, then each piece would be a different tradition, family member or friend.

“In Pakistan, the culture is so vibrant and stuff,” Muhammad said. “Practically anywhere you live, you would love it.”

Now that they were leaving their home country, they had no idea how the pieces would fit together.

Everything would be different. Alsa and Muhammad had never even visited America before, and they wouldn’t get a chance to do so before moving. They only had one aunt and a few family friends living here at the time.

Alsa and Muhammad spoke English fluently after taking it in school, but they were used to speaking their native language, Urdu, outside of class.

All they knew was that America was for people like them.

“My parents and my family wanted to make a difference in people’s lives, and they knew that America is a beautiful country that supports big dreams,” Muhammad said.

Muhammad scribbled in his four-by-six inch diary in messy fifth-grader handwriting. The previous pages were filled with homework assignments, formatted with a date and teacher signature. But this one was different.

It was the last page he would be filling out before moving to America. He went to each of his friends, writing down their moms’ phone numbers.

“When I think of school, the first thing that pops up are my memories from Pakistan schools,” MuhammAad said. “I made a lot of good friends over there.”

Their father had already bought a house in America, so they didn’t pack much. In addition to the diary and a yearbook photo, Muhammad and Alsa only brought a few pieces of clothing to wear for the first week, while their mom packed special antiques, kitchenware and awards her kids won over the years.

“I remember seeing my empty house and I was like, ‘This is happening,’” Alsa said. “Because we’ve moved, but we’ve never really had to move from like one side of the world to another.”

Alsa and Muhammad don’t remember much about taking off from the airport in Pakistan or landing in America on July 5, 2014. Their memories start in the car, driving from the airport to their new house.

The twins looked out the window, watching as rows of houses flew by. They all looked identical with reddish-brown bricks and a dark roof, like they were mass produced on an assembly line. The garages were all plain and automatic, a far cry from the painted gates that personalize each house in Pakistan.

“In Pakistan, each house is so beautiful and so architectural,” Muhammad said.

But when they stopped in front of their new home, Alsa and Muhammad didn’t think about Pakistan. They dashed upstairs to claim their rooms, and Alsa claimed the bigger one. She is older, after all.

They spent the next few weeks settling in. They went shopping for new clothes and visited Briarhill Middle School, where Alsa and Muhammad would start sixth grade.

“It was an easy transition,” Alsa said.

They didn’t have much of a language barrier when they started school, and Muhammad said that when compared to his classes in Pakistan, the American curriculum seemed easier. However, the structure was completely different. In Pakistan, students wore uniforms and stayed in one class while teachers rotated.

“Over there, the school was super formal and bureaucratic, but here it’s very nurturing and very casual,” Muhammad said.

Alsa and Muhammad went to private school for seventh grade but moved to Lamar Middle School for eighth. They knew that they would be moving onto high school with the class, and finally started feeling like they could find their places in school.

“Every year I’ve made a lot of new friends,” Alsa said. “I’m still friends with everyone that I’ve ever talked to.”

They didn’t have to think twice about what their roles in the school would be. With the spirit of entrepreneurship in their genes, Alsa and Muhammad knew they wanted to help people.

They both took advanced classes and worked together to start a program called Twin Bits their sophomore year, where they focused on finding solutions and resources for families impacted by autism and other developmental disabilities. Muhammad and Alsa, who were inspired by their cousins who have autism, spoke with experts and partnered with a company in Silicon Valley to help develop new software.

“We felt grateful and blessed that we got the opportunity to contribute and at a young age, see what it feels like to make an impact in someone’s life,” Muhammad said. “And since we had already experienced this in our family, we knew how meaningful it would feel for them.”

Alsa was drawn to student council. She didn’t know what it was, but Alsa was a natural-born leader and used to read the announcements during her school’s morning assembly every day in Pakistan. After seeing a tweet about class president elections at the end of her freshman year, she decided to put her name on the ballot.

“I’ve always been used to having responsibility with my little siblings and him, so I really wanted, first, the platform of helping my teenage friends,” Alsa said.

She has been elected as the class president every year since she was a sophomore.

“This is the best opportunity ever because the feeling of knowing that people want you to be a part of something bigger is amazing,” Alsa said. “And I’ve felt that since we moved to America.”

Muhammad, on the other hand, was an athlete at heart and joined the track team.

“Junior year was very good,” Muhammad said. “I started running fast and getting good, and my last race actually, I was nationally ranked 14 in the relay race.”

The past four years were a learning process for Alsa and Muhammad. When they started, they didn’t know about AP classes or any colleges beyond the world-famous universities like Harvard.

But when Alsa and Muhammad started doing research at the end of 2020, the grades and extracurriculars they held for the past four years were on level with top schools. Their teachers and peers encouraged them to apply.

“At first, I literally wasn’t even thinking anywhere beyond colleges nearby,” Alsa said. “And then I talked to my teachers, and then I realized… the opportunity. I should at least try.”

Cornell found their accomplishments were Ivy-worthy, accepting both Muhammad and Alsa. Currently, Alsa will attend the University of Texas, although she may transfer to be with her brother after a year.

“America supports big dreams,” Muhammad said. “This reinforced that when you see all this inspiration and encouragement… that we can do it, and we just needed to trust in ourselves and just share our stories.”

As they head off to college in the next few months, Alsa and Muhammad said that they know their parents made the right decision to move.

“Pakistani culture and all that you experience there defines us,” Muhammad said. “[It’s important] to hold on to that and also while holding on learning new cultures and immersing yourself in new experiences in the U.S.”

This story was originally published on The Marquee on May 16, 2021.