A Year Without Patrick 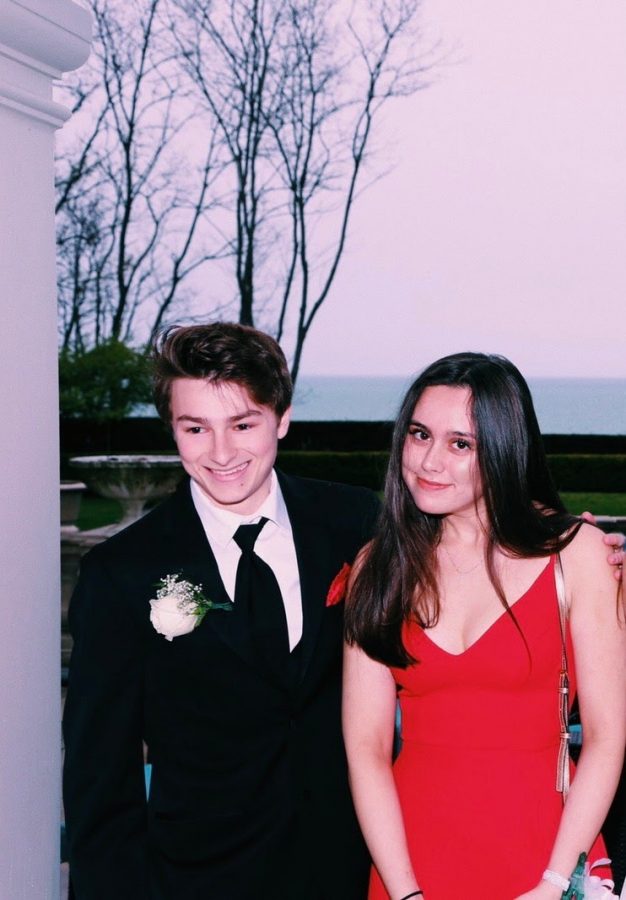 Staff Writer Carolyn Kaefer and Patrick Roemer before prom in 2019.

A year without Patrick: It’s an unreal sentence to write.

On Mother’s Day last year, only a couple of days after he passed, I met with Patrick Roemer’s mom, Fronzie, who agreed to share her first Mother’s Day without her son with me. I felt more connected and comforted by just being with her and sharing stories about Patrick.

A year later, we talked about the challenges of all the firsts without him: The first Christmas. The first birthday. The first anniversary.

“The first year for me has been a year of mostly feeling numb,”  she said. “But people are there for you for so many of the firsts. As we are living through this first anniversary, my feelings are becoming more real.”

A year later, “forever is starting to settle in,” she said.

“Now I hear from many that have experienced the loss of a child that the second year is actually much harder than the first. But I’ll get through it.”

Last May Patrick died by suicide. I knew him for about two years, and the pain I felt was unbearable. I cannot imagine the grief and pain a mother must feel when she loses a child.

Roemer says she found some solace in therapy.

“I have the most wonderful therapist that has helped me to understand both the physical and emotional aspects of trauma and grief. We explore what is happening not only in my mind, but what that does to my body. It would be fascinating if it wasn’t so heart-wrenchingly painful,” she said.

Friends and family helped, too, she said.“ I also surround myself with friends and loving family. They have kept me afloat these past 12 months.”

She finds ways to handle her grief in healthy ways, which I find extremely inspiring.

Eventually, I found help, too, but it took other people to set up meetings with social worker Mr. Dan Maigler because I was resistant to seek help and to find healthy coping mechanisms.
Paws for Patrick
It’s a good thing I was pushed to talk to Mr. Maigler, who was one of the best resources for me during this time. He always knew what to say, even if it meant telling me things that were hard to hear, such as understanding how death is an inevitable part of life.

Mr. Maigler and Mrs. Roemer both said they found some comfort in Paws for Patrick, the non-for-profit set up in Patrick’s name. It provides emotional support animals to people suffering from mental illness.

The group has received more than 75 requests and more than 100 people have joined to support the mission. This month, the organization brought dogs to LFHS for an emotional recharge for students.

“ Knowing that we can help give the love of an animal to a young person struggling with mental illness, depression, anxiety, etc. gives me some peace. I truly feel Patrick smiling when I see a Paws for Patrick recipient smiling with their new ESA, or when I get to hear from happy ‘clients’ or when our therapy dogs pay someone a visit,” she said.

May is Mental Health Awareness month. Suicide is the second leading cause of death for people ages 10-34, and suicide has increased 35% since 1999.

“ We have put a lot of effort in getting the word out about mental health, not only with our ribbon tying event but also with events throughout the month, like our mindful meditation, Zoom strength workout, animal shelter drive, swag day.”
The Stages of Grief
I found comfort in the fact that she and Mr. Maigler also experienced the stages of grief.

“Denial, Bargaining, Anger, Depression, and Acceptance.  We do not move through them like chapters in a book, but in a whirling vortex of feelings in a complicated life that is impacted by so many other stimuli while we are also grieving,” Maigler said.  “I spend as much time as I can in denial. That has been easy in a year where every day feels like part of a never ending dream.

“Bargaining is the worst for me. The feeling of shame and failure. The certainty that I could have/should have done more. Compared to that I welcome my anger and depression,” Mr. Maigler said.

My own stages were more complicated than I expected.

Denial. I watched the sunrise with a friend on May 5, 2020. When I came home, my dad said Mrs. Harmsen had called and wanted to talk.  I thought I was in trouble or doing poorly in a class, but I found out Patrick attempted suicide the night before. It felt like a really awful prank being pulled on me because it made no sense. I was talking to him just last night? I didn’t believe her, but I knew she had no reason to lie about something like that. And once he did pass, it was even harder to accept. I denied his death but continued to feel the pain from it.

Anger. I was an angry person after he passed. I thought it was so selfish; I was mad at him. But I realized I was the one being selfish. My close friend was struggling, and I only knew bits and pieces; I never knew he was going to get to that level. My anger during that time is one of the things I most regret.

Mrs.Roemer texted me the memorial information, and initially, I was not going to go. I was so enraged by the situation it felt too upsetting to show up and see more people grieving. My parents, after fighting me long and hard, dragged me into the car. My dad explained how if I don’t go I would just be even angrier for not showing up.

As I pulled into the memorial, everyone was gone. I missed Patrick’s memorial, leaving me even more angry. This time at myself.

Bargaining. I am not a religious person, however, in that instance, I prayed to God, grabbed tarot cards, and did anything possible to change the outcome. When he was in the hospital, I prayed to God, told him I would be a true believer if he could save Patrick.

Of course, nothing changed. My bargaining accomplished nothing.

Depression. This stage of grief was the hardest for me to get through. I remember my dad and brother trying to keep me strong and showing little sympathy, but I also know it was because they had no idea how to handle me in such a state.

I am not much of a crier or emotional really, but I remember my sister-in-law and close friend Darla hugging me. Being alone during this was the hardest because all I could think of was that he was gone.

My depression was long-lasting, and most of the nights were me falling asleep aching for my friend back or wishing I could go back in time and give him more love.

Acceptance. Acceptance is something, at least for me, that just feels wrong. I have accepted his death, but that sentence is so uncomfortable. I still get choked up when I am needed to talk about him, or when certain songs play, or when I go to places he would take me.

Acceptance doesn’t mean you are “fine” and have emotionally accepted death. Instead, it means accepting the reality that I am no longer in denial.
‘Cause I Love You, Man’
Even when Patrick was suffering through his own issues, he was always one of the few people I knew I could count on and have by my side.

He would drive me to and from school every day just because I hated taking the bus and still didn’t have my license. And he would never complain. I also told him once I was craving some pizza rolls, and he came driving over with hot pizza rolls ready for me to eat.

I wish I was kinder and had less of an attitude towards people. Patrick was one of the kindest people I have ever had in my life, and for me to not return that same level of gratitude towards someone who treated me well is simply another regret of mine.

The screenshots and videos I have with or of Patrick, remind me of his humor as well. Not only was he sweet, he knew how to make me laugh or smile.

There was one occasion where Patrick and I got into a petty argument, and he sent me a video saying, “Carolyn, I just wanna make sure we’re still friends. ‘Cause I love you, man.” And as sad as it sounds, his tone of voice in the video was making it much funnier. But around this time last year, all I wanted to do was replay that video on repeat and hear his voice.

Patrick will forever be remembered by me, and even if you did not know him well, it’s important to note how beautiful he was and the impact he made on people. Patrick did not deserve to  suffer the way he did, and we as a community need to do what we can to prevent it from happening again.

As well as expressing our love more for those close to us.

This story was originally published on The Forest Scout on May 18, 2021.