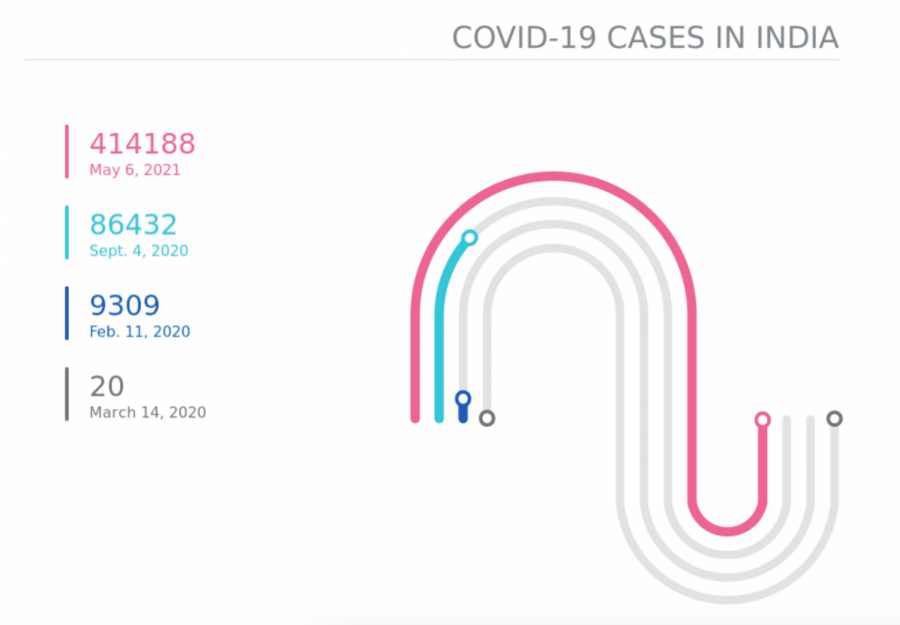 Following a brief period of lowered COVID-19 cases, a recent surge of cases in April has left India grappling with a second wave, making it the country with the second-highest number of COVID-19 cases in the world currently. Source: Johns Hopkins University Coronavirus Resource Center.

After a period of little to no COVID cases in India, a recent surge of cases created a second wave, leaving millions infected.

“We have all of our family in India,” CHS junior Amita Satish’s mother Maithreyi Satish said. “It is very scary that we are so far away and the situation is so unpredictable that we are not sure what would happen or what we would wake up to.”

COVID cases were stabilized in India until April, where 700 new cases were recorded in a single day before the surge, when the cases were close to none. There are more than 24 million cases and 262,000 deaths recorded.

“The sudden rise in COVID cases was totally unexpected,” Rana’s cousin and University of Delhi student Astha Rana said. “I thought that with the declining cases, we all would gradually be able to go back to the lifestyles that we had before COVID. I had planned a lot of activities for the summer, but none of it can happen now. Lockdown has been imposed and no one knows when it’s going to end. We are once again confined to our homes and can’t step out.”

The rise of cases was around the same time as the elections in India, which according to Malik, might have aided in more infections per day than any other country.

“The Election Commission organized elections, which can be delayed, and no protocol was followed,” Malik said. “As a first, the new strain of the virus was found in metropolitan cities, and it was transmitted to the rural areas when people traveled to their cities and villages for casting votes.”

With the spike in cases also came travel restrictions, limiting U.S. families from seeing their sick loved ones.

“With the travel restrictions and all of the things that this whole pandemic is carrying, there is definitely a lot of uncertainty and a little undefined fear,” Maitheryi said.

The overwhelming increase in cases everyday has also caused oxygen and resource storage in India, leaving many patients untreated and many hospitals undersupplied.

“Some of my relatives are admitted in various hospitals in and around Delhi,” Astha said. “Resources are scarce. Many times, they had to shift between multiple hospitals to get oxygen, an ICU bed, some injections or medicine. So many people are dying each day and it couldn’t get more scary.”

Astha thinks the United States and other countries can help India by providing a supply of resources to take care of their patients. The United States started supplying oxygen to India from April 29.

“Other countries can provide help by supplying the necessary equipment like oxygen cylinders and concentrators,” Astha said. “There is a shortage of vaccines in India since the population is huge, and if other countries could supply vaccines, it’d be of great help.”

This story was originally published on Coppell Student Media on May 17, 2021.