Curiosity killed the cat but life threatens to kill curiosity 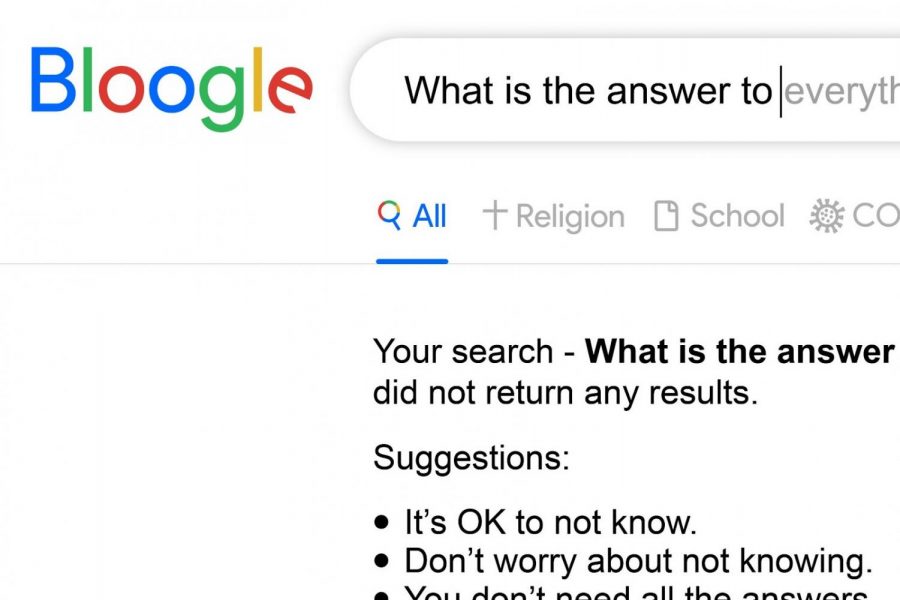 A lot of people have questions they want to find the answers to, such as “When is the pandemic going to end?” or “How can I motivate people?” but they cannot find said answers. The Sidekick editor-in-chief Sally Parampottil thinks people must accept the fact that they don’t know and understand they may never find out or find out later in life as they grow.

There was once a little girl obsessed with the Disney movie The Little Mermaid. Though lacking in red hair and a tail, Ariel was reflected in her through curiosity: the defining trait of the princess and eventual prominent characteristic of the girl as well.

The little girl’s questions once revolved around topics such as why the sky is blue and where babies come from. Their answers were easy to find, easy to understand. She would ask her questions, get her answers and move about her day, satisfied with her newly acquired knowledge.

By the time high school hit, that little girl was no longer quite that little. A bit more mature, a bit more aware of how the world worked, her questions drifted towards the abstract, rather than just asking for the information bound in a textbook.

Growing up comes with the sinking realization that age doesn’t come with all the knowledge of the world. As the unknowns dancing around her head grew more difficult to answer, she felt herself slowly becoming less sure of just about everything. She was still uncomfortable with the idea of not being able to find a concrete answer; her stubborn sense of inquiry demanded something more than a philosophical shrug of the shoulders.

When it came to her first big period of questioning, the mammoth of religion was the what and freshman year was the when. Grappling between the truth of free will and God’s plan sent her into a spiral of doubt. No Google search would solve the riddle, no Sunday School teacher had a solid answer to provide. When it came down to it, all everyone seemed to tell her was to pray for understanding – not the answer she wanted or found satisfactory.

Sophomore year brought frustration on another level as the girl stared at algebra II lessons, assignments, quizzes and tests throughout the year. It wasn’t that she didn’t care to learn – she truly did – but nothing seemed to stick. Information went in one ear and out the other, and though there was a solution to every problem, she found herself answerless when asked to complete assignments of any degree of difficulty.

By the time junior year rolled around, friends and family had gone all out with their questions regarding the girl’s future. Where was she applying for college? What would she study? What career did she want to pursue? The answers for all of those questions had changed throughout her life. For the first: Stanford, Brandeis, Fordham, Rhodes, Berry, only Texas schools, only Texas secular schools, only a handful of Texas secular schools. For the second: law, politics, evolutionary biology, law again, history, English, history and English. The third: lawyer, elected official, evolutionary biologist, lawyer again, museum curator, author and eventually, teacher.

Sure, she had an answer every time, but the reality was she didn’t actually know. The answer was still shrouded in the future, and truthfully, whenever she was asked and she answered, her uncertainty made her feel like she was lying.

The girl became a woman in her senior year, turning 18 about half a month into the school year. It didn’t stop the unanswered questions; in fact, they increased. When would the pandemic end? Why was this happening? How could she keep herself motivated, motivate others and make sure this year didn’t feel like a waste of time? These were the questions that brought her to tears, the ones that flowed often in the first semester and on occasion in the second.

But the existential questions of her current year in high school came with some form of comfort: everyone was asking the same questions. Though no one seemed to have an answer, the sense of frustration was universal, the curiosity was unbearably present.

The world let out one big, collective “I don’t know.”

That’s the phrase the girl had needed to accept all along.

Her religious questioning ended with skepticism, but a reliance on faith more than anything. She came to the conclusion that the impossible subject of algebra II was not made for everyone; she would never use it again and therefore, it was OK if she didn’t get it. Though her current vision of the coming times includes English and history and eventually becoming a professor, admittedly the future still seems a bit vague, but she will find out eventually. Of the questions asked this year, there is a mix of “I don’t knows” and “I don’t know yets.”

Life is kept interesting because every question does not always have an immediate, clear-cut answer. The pursuit of those questions, the thrill of the unknown is all a part of the journey of living, and though it may seem frustrating and emotionally draining at times, accepting that fact helped ease the girl into a healthier mindset.

I don’t need to know everything. I won’t curb my curiosity, and I will never abandon the aspiration to know as much as I can, but high school taught me that in the end, there is not always an answer to be found.

This story was originally published on Coppell Student Media on May 14, 2021.