Best of SNO • May 26, 2021 • https://bestofsno.com/52287/opinions/how-mutual-aid-offers-an-ethical-community-oriented-alternative-to-charity/

How mutual aid offers an ethical, community-oriented alternative to charity 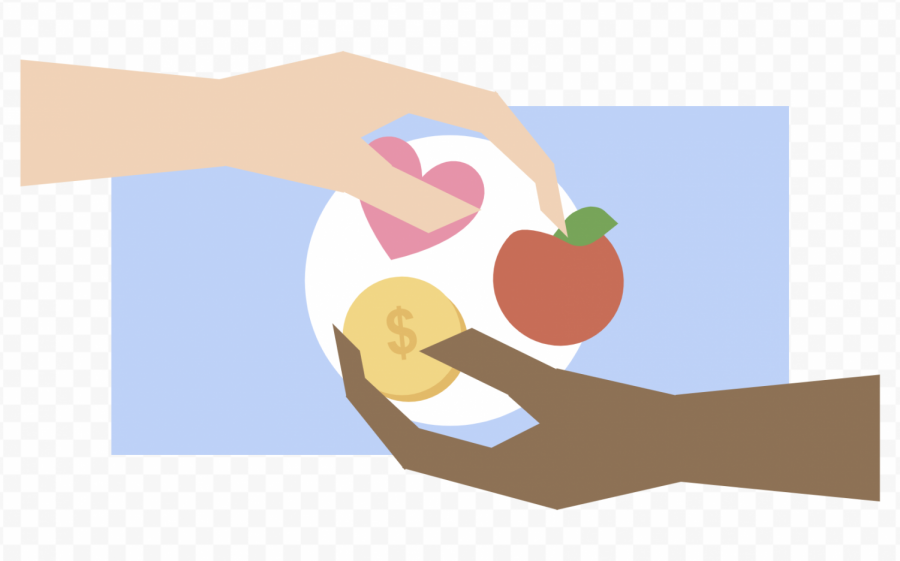 Many consider mutual aid to be a more effective way to support your community than charity due to its cooperative, socially-conscious structure.

What is mutual aid?

Mutual aid was a term coined and popularized by philosopher Peter Kropotkin in his magnum opus, a 1902 essay collection entitled “Mutual Aid: A Factor of Evolution.” But what exactly is mutual aid? Simply put, it’s a system. An exchange of food, services, money, resources in order to aid mutual benefit. It’s the idea that if civilians take responsibility for caring for the other people in their community and give what they can, they will, in turn, also be taken care of. Mutual aid is a cooperative technique used to meet the needs of the most vulnerable in our communities. According to Maya Adereth’s news article in Jacobin, “mutual aid networks constituted the most popular form of voluntary association in the US throughout the mid-nineteenth and early twentieth centuries.”

Who does mutual aid empower?

Frankly, it benefits all who choose to engage in it, which is mostly the working-class. On one hand, as a recipient of mutual aid, you have the benefit of being able to receive basic human necessities such as food and water, and the benefit of knowing your community cares for you. And when you eventually decide to give back, you gain solidarity and empathy for the people in your community, which helps build a stronger bond amongst everyone who engages in the process of mutual aid. Many say that mutual aid highlights the better parts of humanity, through creating a collective spirit. Dane, a general volunteer from East Bay Food Not Bombs, a mutual aid network in northern Calif., spoke about how mutual aid has taught him about “interconnectedness” and the feeling of “being a part of something larger” than oneself.

What’s the difference between mutual aid and charity?

Mutual aid is meant to combat the downsides of supporting traditional charities or large-scale organizations. A key feature of most mutual aid groups is that individuals can request vital resources or funds that they need, and the community will in turn fulfill those needs, often through online payment services.

“Mutual aid is about building ‘bottom-up’ structures of cooperation, rather than relying on the state or wealthy philanthropists to address our needs. It emphasizes horizontal networks of solidarity rather than ‘top-down’ solutions,” explained Matthew Whitley in a news article for openDemocracy.

So should you stop donating to charity?

We’re not here to tell you that you should never donate to charities ever again; rather, that the systems of charity and philanthropy are fundamentally flawed, and mutual aid offers a more ethical and community oriented way to help those in need. Dane explained that charities are intrinsically tied to the non-profit industrial complex, which benefits the rich and the state by maintaining a top-down structure. Furthermore, charities often fall short on truly supporting their communities by receiving money from morally dubious donors or by having underlying political or religious motivations for their causes, such as the alleged malpractice of organizations such as The Salvation Army and Autism Speaks. Though there are still some organizations that refuse money from certain donors or adhere to strict ethical standards, they still adhere to these fundamentally flawed systems.

Mutual aid is built off of an acknowledgment that the current political and economic systems in place are not meeting the needs of the people. The solution to these issues that mutual aid is bringing to light isn’t going to be implemented by whoever’s in the White House, but rather by completely “redesigning” our economy and political system: a “redesign” that prioritizes everyone’s needs. Mutual aid helps “challenge worldviews of capitalism, patriarchy, and other dominant ideologies,” according to Dane. This means, yes, it’s inherently political, though you can partake in mutual aid no matter your political views. Mutual aid is placed under the belief that access to food, water, and other resources are basic human rights, which many would categorize as a fundamental cornerstone commonly associated with leftist politics and ideologies. In fact, many Democratic Socialists of America (DSA) organizations use mutual aid as a key part of their advocacy.

What are some relevant examples of mutual aid?

In this past year, mutual aid has become more relevant than ever. Just in these past few months, many mutual aid networks have established ways for money, food, and other resources to be delivered to those who are struggling with rent, food insecurity, and lack of medical care during the COVID-19 pandemic. There have also been established funds on GoFundMe that were created to bail Black Lives Matter protestors out of jail earlier last year. Many people believe that mutual aid’s relevancy is only going to continue to increase in the coming years, as the concept has entered the mainstream. “It’s all over social media,” said Dane. “It’s weird and exciting to see.”

How can you engage in mutual aid in the Bay Area?

As mutual aid has increased relevance during the pandemic, volunteers have compiled lists of local mutual aid networks that all community members can engage in, such as this one from the NorCal Resilience Network. Groups like Common Humanity Collective and SF Mutual Aid offer ways to offer support, request support, volunteer, and donate money or supplies. As Dane explained, you can even start your own mutual aid network just by sharing resources outside of the dominant system. These networks are often small-scale and cover only specific cities or regions to maximize the number of benefits they can provide to the greatest number of people in one area. For example, East Bay Food Not Bombs distributes around 300 vegetarian meals a week to the greater Oakland area, with overflow food from grocery stores and other locations, with the specific mission of protesting the military industrial complex and violent ideologies. Though these collectives might be small, their impact is enormous. Mutual aid is saving lives daily, all while fostering compassion and slowly working to dismantle the systems that have oppressed our most vulnerable communities for centuries.

This story was originally published on Wildcat Tribune on May 25, 2021.