Down I went into the rabbit hole of counting calories and working out every second I had a free moment. It was a spiraling tunnel of misery. 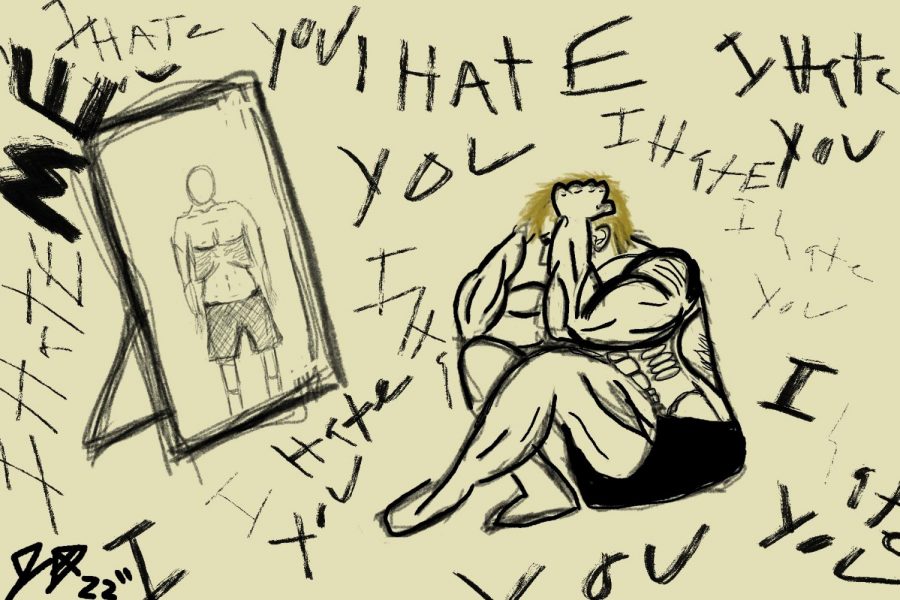 Therapy, while rough and very emotionally draining at times, has helped drastically. I look into the mirror, and I'm starting to see a more hopeful reflection staring back at me. Jackson Ostrowski

By Grace Papas, Brimmer and May School

Last year, I wrote an article about how beauty standards impact teenagers in their day-to-day lives. A lot has changed over the course of that year, but the images that follow me from the cover of magazine models to online clothing shopping have not.

Like many people I know, when quarantine was in effect this time last year, I was given more and more time to criticize every flaw I saw when I looked in the mirror. In the past, I was always too busy and distracted to spare a second glance at the mirror. I had never given my body much thought.

But now, I had all the time in the world.

I diagnosed my “problem” extremely quickly. I was too big. My thighs, my waist, my shoulders—everything was too big. I’ve been active for the majority of my life, but I felt that my body poorly displayed it. I didn’t see any models with broad shoulders, or thick thighs, or a waist that wasn’t more than ten inches wide.

The only “possible” explanation was that there was something wrong with me and that I needed to be fixed.

Down I went into the rabbit hole of counting calories and working out every second I had a free moment. It was a spiraling tunnel of misery. I refused to let myself eat more than 1000 calories a day, and when I did, I would force myself to work out despite having worked out for four hours already.

My feverish search for that magical cure was spurred on by Youtube and subliminal advertisements of the American body ideal.

One more pushup. One more crunch. One more plank and you’ll be pretty.

By the time summer rolled around, I felt like an intruder in my own body. I felt trapped and alone inside my own skin. Looking in the mirror became something I feared. It was something that brought tears to my eyes and those feelings of inadequacy back to the surface very quickly.

While the summer improved my mental state, thanks to a group of supportive friends and a combination of distractions, the school year brought back everything that the summer had distracted me from. I would be going back to school, where it had come to feel like everyone was criticizing my every move.

But it wasn’t them. It was me.

By the time I realized how toxic my mental image had become, the damage was already done. I stared at the floor every I entered my classrooms, I recoiled every time a camera lens was pointed in my direction, and the mirror had become my worst enemy.

But then I gathered the courage to ask for help. That’s what allowed things to get better. Therapy, friends, and family have woven together into the rope that has allowed me to begin to pull myself out of this seemingly endless pit of self-loathing and despair.

Therapy, while rough and very emotionally draining at times, has helped drastically. I look into the mirror, and I’m starting to see a more hopeful reflection staring back at me. Now I work out for personal growth and enjoyment– not for a number on a scale.

“By the age of 3 or 4 some children have already pretty much begun to make up their minds—and even hold strong views—about how bodies should look.” Jacqueline Hardine, advisor to the Professional Association for Childcare and Early Years, said in an article for Beauty School Directory.

The numbers speak volumes about our society’s focus on unachievable beauty. Young children, whose time should be spent playing outside, already begin to develop harsh standards for themselves. That, as someone who lost part of their eighth grade and most of their freshmen year to these horrible thoughts, makes my heart ache and blood boil.

All those hours I spent hating the way I looked are hours I’m never going to get back, and unfortunately, I’m far from alone.

These statistics, these experiences, serve as a desperate call for change from society. We can’t afford to lose another generation to these awful standards. We need to ease the pressure, get rid of these crushing standards, and maybe then, things will look up. They got better for me, which means it’s possible.

This story was originally published on The Gator on May 26, 2021.