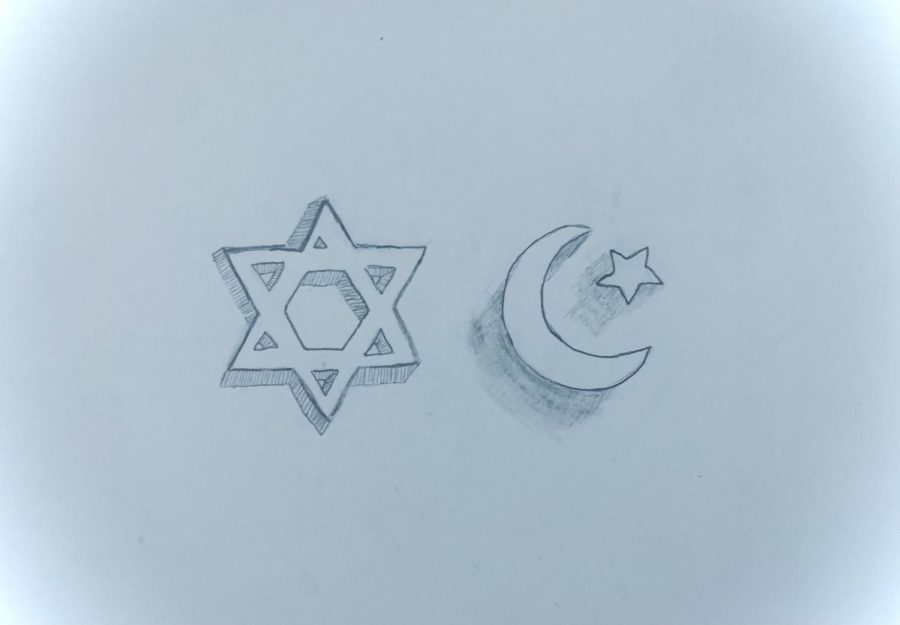 Both Latin’s Islamic Student Association (ISA) and Jewish Student Connection (JSC) have begun the 2021-2022 school year in pursuit of affinity recognition, hoping to relinquish their current classifications as clubs. But a lack of Muslim and Jewish faculty has hindered both groups’ desired transitions.

Both Latin’s Islamic Student Association (ISA) and Jewish Student Connection (JSC) have begun the 2021-2022 school year in pursuit of affinity recognition, hoping to relinquish their current classifications as clubs. But a lack of Muslim and Jewish faculty has hindered both groups’ desired transitions.

Among many programs that Latin boasts are the Upper School clubs and affinity spaces. The distinction is important: A club, like robotics or scholastic bowl, is a space for students with shared interests to collaborate on projects or compete as teams, while affinity spaces, the needs for which have become clear in recent years, are safe havens for students with shared identities to convene for discussions and support.

There are few regulations groups must follow in order to secure affinity status. Members are limited to students and faculty who share the identity of the group, though affinity leaders may choose to open specific meetings to allies as well. In addition, the group must have a faculty advisor who belongs to the affinity.

Despite conversations concerning the lack of diversity within Latin’s faculty, including a demand from 2020’s Demanding Accountability calling for more BIPOC (Black, Indigenous, and People of Color) faculty and counselors, affinity groups representing racial identities have been successful in recruiting advisors.

But JSC’s search for a Jewish advisor has been more difficult, and, so far, ISA’s hunt for Muslim faculty has been unsuccessful.

According to Latin, 41% of all students and 38% of Upper School students identify as students of color, while only 24% of faculty identifies as faculty of color. Latin lists increasing BIPOC representation among faculty as its first Diversity, Equity, and Inclusion (DEI) institutional goal but does not list other forms of diversity at all.

JSC senior heads Marissa Isaacs, Phoebe Lembeck, Ryan Kramer, and Naomi Altman, and junior head Lizzie Lucas expressed the importance of having their own affinity space. “We want Jewish students at Latin to have a space where they feel comfortable discussing any feelings or concerns they have regarding their Jewish identity,” they wrote in a joint statement.

Senior Noor Ahmed, head of ISA, said, “Since I started ISA, I’d say the most frequently asked question I get is, ‘But why are you a club?’ It’s never really made sense for ISA to be a club, because the Muslim identity isn’t really an interest.”

Unlike weightlifting or chess, being Muslim or Jewish is not a hobby. Regarding ISA’s being grouped with the yearbook and anime clubs, Noor added, “Especially because we are such a marginalized group of people, it diminishes the importance of recognizing faith as a part of one’s identity.”

Club and affinity meeting times are built into separate days of the Upper School schedule so that students may explore both their passions and identities, but until now, Jewish and Muslim students have been left to choose between the two.

“It was hard sometimes to choose which to attend,” said junior and JSC member Callie Milner. Callie is eager to be back in person for clubs and affinity time. She added, “I am very excited JSC is becoming an affinity. I will be able to attend the clubs I want while also being able to partake in JSC.”

With Director of College Counseling Alexandra Fields as their new advisor, JSC is officially an affinity space. “We hope that we have more Jewish students at Latin attend our meetings when we hold them during affinity block,” JSC leaders said.

JSC’s search was not an easy one, and the group would like to see Latin hire more Jewish teachers in the future. “As antisemitism continues to be prevalent in society,” said the JSC heads, “we feel Jewish teachers are needed at Latin to help Jewish students battle this type of hate.”

Of the policy that an affinity advisor must share the identity of the group, Noor said, “I think that it can be incredibly restrictive, and quite frankly, it highlights the lack of representation of identity at Latin.”

“To my knowledge,” said Noor, “Latin does not have any Muslim faculty.”

Director of Diversity, Equity, and Inclusion Eleannor Maajid was also unsure if any such faculty existed, though she did add, “We are not allowed to ask someone’s religious affiliation.”

Ms. Maajid also explained the need for an adult presence in an affinity space. “Sometimes those discussions could really bring up sensitive issues,” she said. “It’s a layer of protection.”

But Noor questioned the need for her affinity to have a Muslim advisor. “I’ve found that while it would be preferable to have an advisor who understands your identity at a deeper level, there are many teachers who are able to properly support groups they don’t personally belong to, in a situation where there’s no one else for those students.”

ISA and JSC’s struggle to find an advisor highlights the need for religious affinity spaces. “When we were struggling to find a Jewish faculty member to be our advisor this past year,” said the JSC heads, “we felt alone in having no one who shared our identity to support us.”

Ms. Maajid said she would be willing to look beyond Latin’s Upper School to help ISA find an advisor. She listed the Middle and Lower Schools, as well as outside organizations, as possible places to search. “We are very committed to providing these spaces for students as we recognize them as extremely important to having an inclusive community,” she said.

Noor thanked Ms. Maajid for her contributions to ISA thus far, saying, “Ms Maajid was very supportive of ISA, and I couldn’t have set up ISA without her.”

Eager to move forward as an affinity, the JSC heads said that “we feel like JSC as a club has not been taken as seriously as other identity groups, so we hope that by transitioning into an affinity, our voices will be heard.”

ISA, on the other hand, is hoping to find an advisor in the near future and would like to see Latin’s senior administration push for a more representative faculty. “After all,” Noor said, “the students don’t control who gets hired here.”

This story was originally published on The Forum on September 15, 2021.