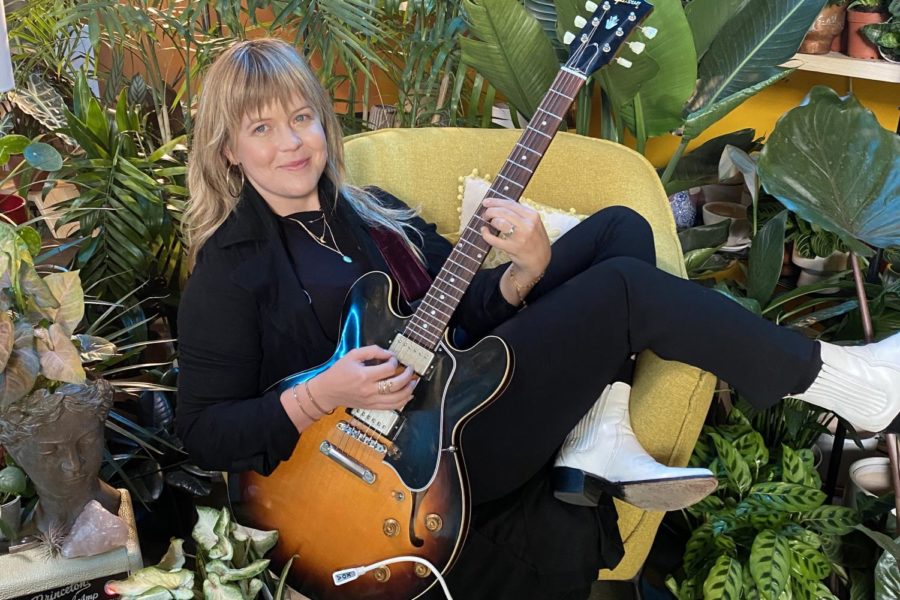 Singer-songwriter and guitarist Emily Elbert is playing with Harry Styles and Jenny Lewis on Love On Tour. Elbert was a junior at Coppell High School when she released her first album, Bright Side, in 2006.

Lost in the music, her fingers pick the guitar strings independently of her mind, as naturally as if she was born with an instrument in her hand and a melody in her head.

Since graduating from Coppell High School in 2007, singer-songwriter and guitarist Emily Elbert’s music has left a lasting impression on global audiences.

What started as dazzling audiences at local talent shows has led to playing on entertainment’s biggest stages. In August, she performed various songs from Lorde’s newest album, Solar Power, with her on “Good Morning America” and “The Late Late Show with James Corden.”

Last week, Elbert performed with Jacob Collier at the Life is Beautiful Music & Art Festival in Las Vegas. Today, she returns to Harry Styles’ Love On Tour where she accompanies Jenny Lewis until Nov. 20. Next year, she will follow Collier on tour from January to June.

Elbert’s talent was apparent in her performances 15 years ago, when she released her first album, Bright Side, as a junior at CHS. New Tech High @ Coppell instructional learning coach Derryl Lee taught her as a senior and attended one of her concerts in Dallas.

“She’s a little bit like a sponge,” Lee said. “She soaks in and digests information, and then creates something beautiful with it. She looks at life and thinks about life, and she expresses that through music.”

Elbert plans on releasing a sixth album early next year, with singles off the album scheduled to release in January and February. Majority of the songs were written and recorded during the first year of the pandemic, when Elbert took advantage of the quiet time at home to reflect on her life and the state of the world.

“Having music as a way to metabolize my feelings was really helpful for me this year,” Elbert said. “While I definitely felt personal and collective grief, that’s certainly something that winds up becoming a part of the tapestry of my creative expression. Having the opportunity to have the time to write and explore things without attachment to outcome, because I was writing a song I didn’t have to play for a bunch of people gave me the opportunity to ask myself what I would create if it was only for the sake of creating.”

Spontaneity and a drive for adventure fuel Elbert, leading to her love for travel. After graduating from Berklee College of Music in 2011, she independently booked shows in 30 countries where she shared her talent with locals.

Traveling the world has also allowed her to connect with nature a hundred different ways, but she credits the parks in her hometown with the birth of her songwriting.

“A lot of times, I would just take my acoustic guitar and I would go to the woods, find a hiding place and play and write songs there,” Elbert said. “That’s actually how I wrote most of my first album, hiding under a tree somewhere in Andy Brown [Park] and Grapevine Springs and finding that solace in nature and also learning how to feel more confident and embodied in my own creative voice.”

For Elbert, music is a meditative, all-consuming experience. When not inspired by nature, her songs are charged with political urgency. Her latest album, We Who Believe in Freedom, was written as she reflected after former President Donald Trump’s 2016 election.

“[We Who Believe in Freedom] came from a place of [feeling] a sense of responsibility,” Elbert said. “Those of us who are lucky enough to have an amplified voice in the world, be it musical or otherwise, have a sacred responsibility to try and do something positive with it and have a positive influence. I was really feeling the power of the songs and wanting to explore the potency that music has as a tool for social change and empowerment.”

Beyond her undeniable talent, Elbert is known in Coppell for her warmth and compassion.

“She’s such a kind spirit,” CHS Principal Laura Springer said. “You can’t say that about a lot of people in our world today, but Emily had a heart of gold and would do anything for anyone. I’m proud of what she’s done. She’s one of the most creative young people we’ve ever had in our building.”

This story was originally published on Coppell Student Media on September 20, 2021.