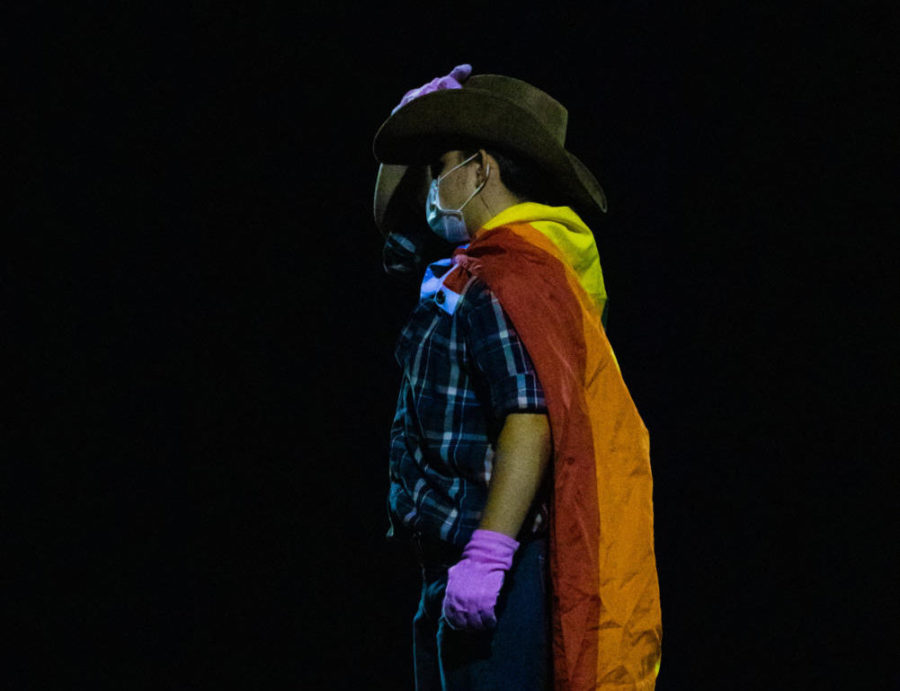 Senior drum major DJ Johnston leads the band during the halftime show on Sept. 24. Band members wore pride flags to show solidarity with students at Newberg after their school board banned teachers from being able to display it in classrooms.

After the Newberg school district announced their ban on Black Lives Matter and Pride items, Tigard students and staff showed up to the Friday Sept. 24 football game in protest mode.

Newberg school board passed the motion to ban BLM and Pride flags in a 4-3 vote on Aug. 10. Those on the board that were in favor of the ban stated that Pride and BLM flags were political and therefore had no place to be in public schools.

A week later the Newberg City Council voted 6-1 to declare its support for Mayor Rick Roger’s reprimand of the Newberg school board for its ruling. The American Civil Liberties Union (ACLU) in a letter sent to the board, demanded retraction of the ban, saying it violated the US and Oregon constitutions.

Despite the rebuttal, the school board’s four-person majority did not reconsider but instead doubled down on their decision. They hired outside legal counsel that was sympathetic to their goals of banning the symbols in schools.

It is now a fireable offense for teachers and staff to show displays of BLM and LGBTQIA+ support in their classrooms at Newberg.

“It wasn’t an issue until they decided it was an issue,” Newberg alumna and economics teacher Kati McKee shared.

In response to the news of Newberg school district’s rulings, Tigard students like senior Ryan Curry began planning to show their support for those affected at the upcoming football game against Newberg.

“To be honest I wasn’t the first person to get the idea to wear pride and BLM symbols to the game,” Curry said. “I saw other people posting about it and just wanted to spread the word.”

There were some rumors spread along the way that administration was against the movement that students were planning, but principal Brian Bailey cleared that up in an email before the game stating that they were “aware of the coordinated effort within our THS community to show our collective support for our Black and LGBTQ+ students as we come together tonight at the Tigard vs Newberg football game [and that] as administration and staff, we fully support these efforts.”

Bailey explained that the efforts were fully aligned with the district commitment, values and policies. He shared the expectations of any demonstration of social expression to be responsible, fair and to not cause disruption or harm to others.

Despite the rumors, students began posting a series of statements encouraging others to protest at the game.

“I was initially worried about if it was [going to] be a tense thing. I thought about sneaking my pride stuff in, in case there was any pushback from staff or anything,” senior marching band drum major DJ Johnston said. “Then I heard that the staff was in on it, and seeing how many people reposted the information [on Instagram] was very heartening.”

“As spectators you are not required to cheer us on. All we expect is that you let each of us perform in an environment of Safety, Tolerance, Acceptance and Respect. We call it being a STAR,” Jolley shared to the crowd. “That means not threatening or ridiculing anyone in attendance based on their race, gender, age, color, national origin, ethnicity, disability, sexual orientation or religion.”

While Jolley spoke, the football team took a knee in support of their black and queer peers both from Tigard and Newberg.

“It meant a lot to be given the opportunity by my coaches and teammates to speak on what it truly means to be a member of our Tigard community,” Jolley said.

Johnston commented on the fans’ response during the game.

“The crowd seemed even more fired up than usual, and I haven’t felt Tigard that united in a long time.”

For many students and staff it was a shock to see a community so close to them make these decisions.

“As a person of color it makes me sick to think other POC are being treated that way in a town not too far from me,” senior Ellie Emery said.

“One of the best things I can do as a teacher is have silent displays in my room that tell people who are marginalized, people who have been put down or ignored or whatever, that they are safe in my room,” McKee said. “That’s something teachers do, and these four in Newberg feel that that is attacking people who aren’t marginalized.”

Just because she has these public displays in her room, it doesn’t mean she doesn’t support her straight students. McKee’s ties to Newberg run deeper than just being a graduate of the high school. She attends church in Newberg. Her church works very hard to be inclusive and active in social justice issues. The news of Newberg’s school district laws affect her personally because they are the people she attends church with and the children of her friends that are being harmed.

“It feels like somebody’s reached out and slapped them just for being who they are,” McKee said. “We need to make sure Newberg students know that this is an anomaly, most thinking caring people support them.”

“Our diversity is what makes us human and brings us together,” Emery explained. “We should celebrate it rather than tear it down.”

After Tigard’s display of support at the game, other schools like Southridge and Sherwood high school, have followed suit in the movement and created their own displays of support.

“I know these people,” McKee said. “Don’t hurt my people.”

This story was originally published on on October 19, 2021.