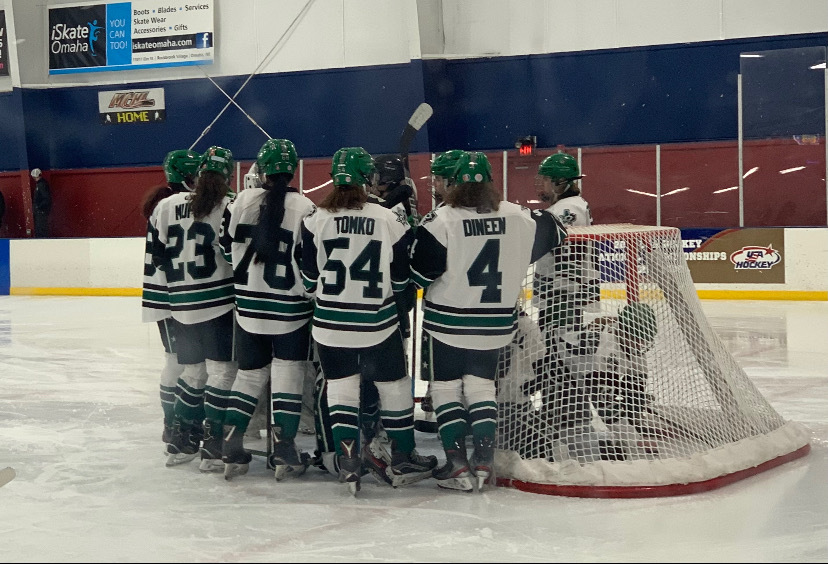 Sophomore Meghan Tomko talks with her teammates at a recent practice. Most of her teammates live near the ice rink in Dallas but Tomko refuses to let the commute impede her from playing competitive hockey.

Meghan Tomko is fearless, or at least that’s what her family and friends say. After spending nearly half her life in the fast-paced, male-dominated world of ice hockey, it appears there’s almost nothing she can’t conquer. Since age 7, Tomko has been playing hockey in all forms imaginable: recreational, competitive, travel, co-ed, all-boys teams and all-girls teams, in a total of four different cities across two states.

Currently, the sophomore plays as a defenseman for the 19-and-under team at the Dallas Stars Elite Hockey Club, or DSE, one of the top programs for youth hockey in the country. The club prioritizes improving their athletes so they are eventually able to compete at a college level, something Tomko has been striving towards for years.

“Their whole mantra is buy-in,” she said. “Trust the process, and we’ll take you there.”

For the past two seasons, Tomko has been doing just that. Drills, conditioning, scrimmages, and tournaments all take her closer to the elite level that is D1 hockey. Even before joining DSE, she committed herself to high-level teams that would challenge her, mentally and physically.

“I went to the national championships after I broke my back,” Tomko said. “I played the first two games, and then I refractured it, so I was out for the rest of the tournament, but I still got my medal!”

Injuries, fights on the ice, and playing, as Tomko calls it, a “super, super masculine” sport have never stopped her from chasing her dreams.

All-girls hockey teams are few and far between, especially in Texas, so the camaraderie Tomko and her teammates share is something she never takes for granted.

Many female hockey players play on co-ed or even all-boys teams for years before finding an all-girls team. DSE is only the second all-girls team Tomko’s been a part of, the first being a travel team based out of El Paso, dubbed the Lady Rhinos.

The people have always been something that Tomko’s loved about hockey; supporting others and receiving that friendship in return is an aspect of playing a team sport she’s valued for years.

“She always brings people up when they are being negative about themselves,” said Katelyn Armstrong, Tomko’s teammate of two years. “She’s always working hard.”

Hard work can’t eliminate all of Tomko’s hockey-related challenges. A unique problem this season is the commute. Around the beginning of this school year, Tomko began driving up to Dallas every weekend, as well as Mondays and Tuesdays, still managing to make it back for school every morning.

The solution to this challenging logistical task was to negotiate with McCallum to ensure Tomko’s continued athletic and academic success.

“We just had a very honest conversation about what her goals were,” Stephanie Tomko said, “and how much she loves McCallum and wanted to stay a part of the community and really have a traditional high school experience in Austin.”

Principal Griffith and the administration team were understanding; since they worked with other student-athletes, Tomko’s situation wasn’t foreign to them. When she received her schedule, her fourth and eighth periods were knocked off, leaving her with some breathing room and more freedom for the commute. The Tomkos, Meghan especially, could not be more grateful.

“They’ve made [organizing the commute] really easy,” she said. While the Tomko family found the McCallum administra- tion helpful, the district hasn’t been the same. For the past five years, Tomko and her parents have been campaigning for hockey to be recognized as an official off-campus PE credit. This would make fulfilling graduation requirements for Tomko much easier, as she has two fewer class periods than other students.

Every year, they’ve been turned down.

In AISD, in order for a student to receive a PE credit off-campus, they must earn the credit at a pre-approved complex or gym, which is listed on the AISD website. There is not a single hockey program or ice rink on that list, and according to the Tomkos, the district says the list is full. Not only does this impact hockey players, but also other athletes who play other unapproved sports (such as competitive cheerleading, horseback riding, etc.) who wish to earn an off-campus credit.

Still, these obstacles don’t mean that Tomko is any less driven. The time and effort she’s putting into hockey are paying off, and she knows she has a long way to go if she wants to continue playing after high school. She stays focused in the present and doesn’t let school or anything else distract her.

“On the ice it’s really hard to let go of mistakes,” she said. “You have to live in the moment because if you think about the past you’re going to get destroyed.”

The opportunities, community, and memories that playing hockey has given Tomko are endless. After playing for over half her life, it’s something that she can’t imagine living without. She feels empowered and truly herself whenever she steps out onto the ice.

While driving over three hours to go and do grueling workouts, spend hours in ice skates and balancing homework in every minute in between seems impossible to others, for Tomko it’s a way of life.

“It’s really hard to explain why I love it so much,” she said. “I just love it.”

This story was originally published on The Shield Online on October 24, 2021.