Driving Through a Legacy 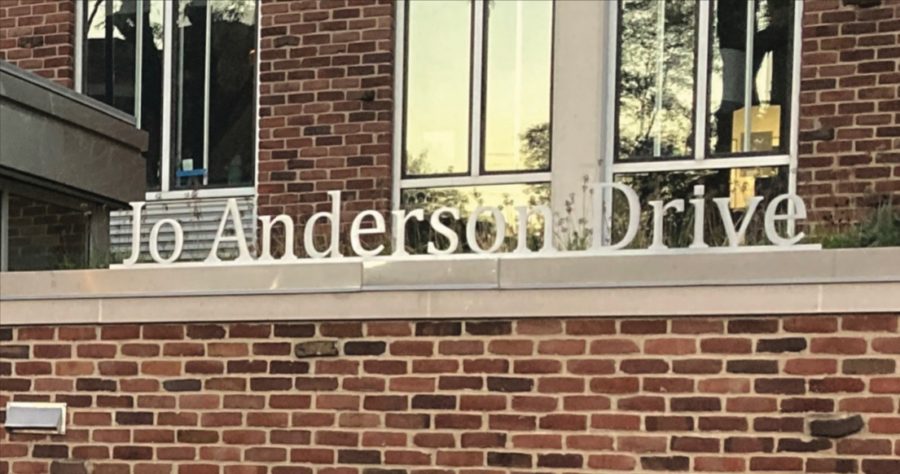 The new sign right on Jo Anderson Drive to commemorate the renaming of Circle Drive.

Every morning, hundreds of cars make a right turn off of Clark Street into a driveway and release students into the Parker atmosphere. This right turn into “Circle Drive” has been made for many years. As of Wednesday, October 6, the cars making the right turn see metal letters spelling out “Jo Anderson Drive.”

At Morning Ex on Monday, October 4, Principal Dan Frank presented to Middle Schoolers via Zoom and Upper Schoolers in person. Frank’s presentation served as the dedication and renaming ceremony for the former Circle Drive to become Jo Anderson Drive.

“Parker will now celebrate the contributions of a person who has not yet been included or honored by the school or the world in a manner that is respectful of his achievement and legacy,” Frank said to start the MX.

The person Frank is describing is Jo Anderson. In the American South in the 19th century, Anderson helped to conceive “the mechanical reaper,” a groundbreaking piece of technology that “transformed agricultural production in the United States,” Frank said.

Frank introduced the context of Anderson’s contribution to the invention. “Mr. Anderson, a man of African descent, did so while he was enslaved by a white man in America’s South.”

Blaine’s inherited fortune paid for the land that Parker currently inhabits and the original Parker building, which stood on what is now the turf field. Furthermore, Blaine financed roughly half of the tuition of all Parker students for its first 30 years in an effort to cultivate economic diversity at Parker.

Frank stated that because this money that heavily contributed to Parker’s creation stems from Anderson’s efforts, “it means that our school’s financial origins are directly linked to the system of human oppression known as slavery.”

Assistant Principal Priyanka Rupani said that Parker would be unable to pursue justice in the future without reviewing “our links to injustice” as a school. She also noted the importance of names and the significance of welcoming Jo Anderson’s name into “our everyday language.”

Rupani hoped that the dedication would be a “catalyst” for more conversations on our history and possibly for more discoveries and research into other ways that Parker is connected to oppressive systems.

“It’s one of the most seen aspects of our school,” Men of Color & Heritage Alliance Head and junior Payton Pitts said about Jo Anderson Drive, “so I think dedicating that to Jo Anderson was definitely a step in the right direction.”

Upper School history teacher Andrew Bigelow had positive feelings about the dedication. “This is a form of truth and reconciliation,” he said. “I believe our mission supports a very diverse, equitable and inclusive environment, and we certainly have lots of work to do, but this is one step in the right direction.”

Bigelow said he planned to use the dedication as part of the Legacy of Reconstruction unit in his US History course. He hopes that students learn from the dedication both about what it means to face history as well as how the oppressive system of slavery fits into our national and local history.

Pitts also said that he wanted students to learn from the dedication.“I hope that it makes them think about the founding of the school and how it’s not always what we thought it was and how it relates to much deeper things,” he said.

According to Pitts, Jo Anderson Drive was a topic of discussion in a MOCHA meeting on October 14. He said that the students acknowledged that the dedication was the right thing to do, but also thought that there might have been ways to carry it out differently. MOCHA attendees wanted Frank to have done more in his Morning Ex speech to acknowledge how long overdue this dedication was. Additionally, the Upper School students who were in the auditorium then participated in an evacuation drill, where students left the MX in silence.

“Symbolic action is action, but it’s also symbolic,” Rupani said. She recognizes the perspective of MOCHA members as very reasonable and important. However, Rupani additionally sees the change as something that might “spark” a more impactful change with the way it gives the Parker community the opportunity to think.

Pitts thought that older students would have a tough time shifting to calling Jo Anderson Drive by its new name but thought that future Parker students and faculty would accept it fully.

Rupani predicted that there would be many instances where someone would accidentally call it Circle Drive and then correct themselves. “Anytime that we’re able to pause and shift our language,” she said, “it’s a powerful moment.”

Along with the lettering reading “Jo Anderson Drive,” an engraved plaque was installed. The plaque tells the story of Jo Anderson and his contribution to Parker and then ends by saying, “We hope that all who pass through here are reminded of Parker’s roots and are inspired to creative positive change for the future.”

This story was originally published on The Weekly on October 29, 2021.