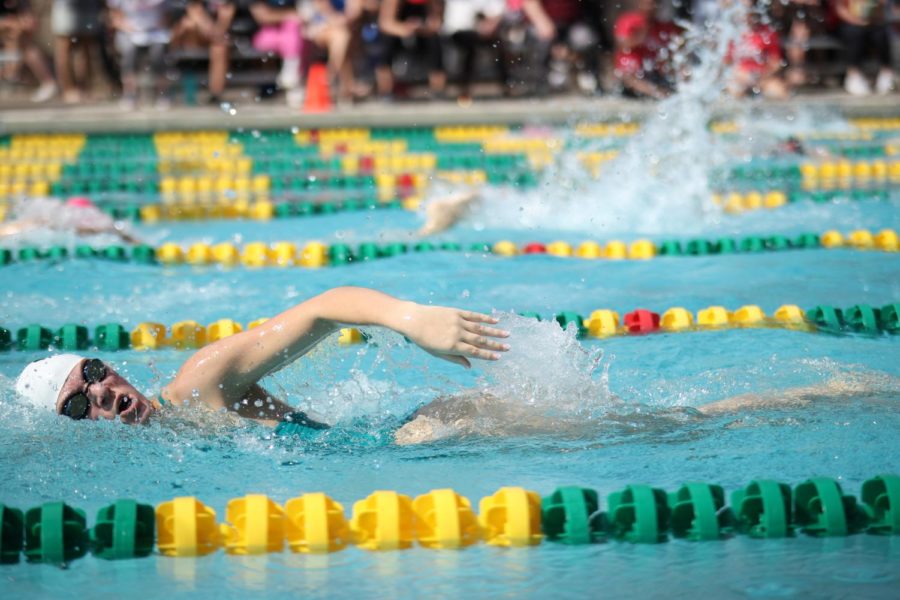 In a row of swimmers, sophomore Maddie McGann crouches in a ready position above the water. Slowly but surely, she takes deep breaths in and out. But as the other swimmers listen for the noise that will signal them to start, Maddie watches. Beside her, an interpreter uses a hand signal to mirror the beeping. Maddie is deaf. To her, the world is silent. But as long as she is swimming, she feels sure that she can take it on.

“Have you ever had that feeling, where when you do something, it just takes your mind off of everything? That’s what swimming does to me,” Maddie said. “When I swim, I forget about everything.”

Maddie started swimming when she was in fifth grade at Texas School for the Deaf and she never looked back.

“I had a few friends who liked swimming and I thought ‘Why not try it?’” she said. “I tried it and I fell in love with it.”

Maddie has been swimming ever since. This year, she joined the McNeil swim team as a sophomore, where she competes in freestyle and backstroke.

“She’s a very strong girl,” McNeil Swim Coach Johnny Foss said. “She’s what we would call a very raw swimmer, so not a ton of experience, but strong and getting fast at a quick rate.”

Swimming has made a big impact on Maddie, giving her an avenue for competition, as well as a social outlet.

“I’ve learned a lot from it, I’ve made new friends, I’ve gotten stronger,” Maddie said. “Without it, I wouldn’t be where I am right now.”

Before she came to McNeil for her freshman year, Maddie had only experienced life in the deaf community. Though she now attends classes with a majority of hearing people, the culture and struggles of deaf people still hold an important place in her heart and she advocates for their abilities.

“It doesn’t lessen my chance with swimming, being deaf,” Maddie insisted. “It’s just that I can’t hear, that’s it. I can do everything except hear.”

On the morning of Sept. 19, Maddie came downstairs early, getting ready for swim practice. Her dad was waiting for her at the kitchen table, grinning from ear to ear. He showed her an email on his phone, an acceptance from the Deaf Olympics Swim Team.

“I told my dad, ‘are you joking?’ I just couldn’t believe it,” Maddie said. “I was pretty surprised, you know. It’s pretty hard to get on the team. Fifteen athletes out of all, swimming for the USA. I was really, really, really, really happy.”

The Olympics will give her an opportunity to swim on an all deaf team. She and her teammates will communicate by signing, instead of using an interpreter like she does at McNeil.

“It feels good to be in a deaf team because we use sign language as communication and that really helps a lot,” Maddie said. “Being on a hearing team is awesome too, but being around the people who sign your language is really good.”

The Deaf Olympics will be held in May 2022 in Brazil, the farthest that Maddie has traveled. To her, the opportunity means a lot.

“It means that I get to strive for success, I get to achieve my goals,” Maddie said. “Being at McNeil, the word deaf is not a big thing. So it’s great to represent the deaf community, the people here who are deaf. To represent us deaf people, we can do anything.”

This story was originally published on The Trailblazer on November 2, 2021.