Turn it up: there’s a DJ in the house 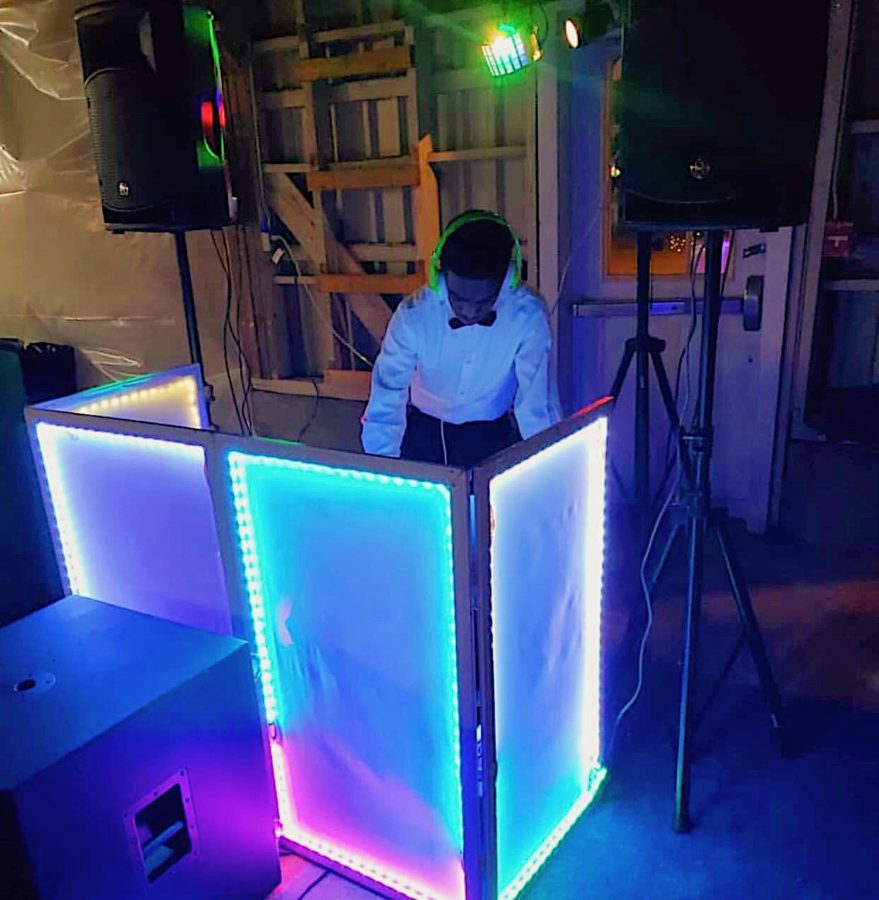 Kaleb Gardner (12) plays music for the crowd of students dancing. He played at the 2020 White Station military ball, and his music ranged from slow dancing music to upbeat pop music.

Lights flash as the beat drops, and the people on the dancefloor have the man behind a neon booth to thank for an exhilarating night. A job that consists of frequent partying, meeting celebrities and listening to music seems almost impossible for a high school student. However, Kaleb Gardner (12) took his passion for music and entertainment and became one of Memphis’s own disc jockeys (DJ).

Gardner’s passion for DJing did not start recently; he first started messing around with equipment when he was 7 years old and only built up from there. At age 10, his parents bought him his own DJing set up, and that put his career in motion.

“My parents bought me my first set up, like my board and everything else like that, and that allowed me where I could actually go out and make money,” Gardner said.

Gardner did not find his affinity alone. By watching the people around him, he found out that he wanted to live the same lifestyle. His parents were supportive of his hobby of DJing turning into a paying job.

“My dad has many friends that work in the radio industry, knowing a lot of celebrities that he knows, and [he sees] the fun life,” Gardner said. “Knowing that I like music and messing around with stuff like that, [seeing them] would show me that I could basically go around and do things that I wanted to do but also make money off of it.”

After about seven years in the business of DJing, Gardner has covered events ranging from baby showers to parties of 60-year-olds, facing many obstacles. Preparing the music and setup for an event is time-consuming, but Gardner has managed to handle it well.

“I try to do one a month … more people are opening up, so I’ve done as of right now three this entire month,” Gardner said. “Pre-covid, I would do four [to five events] each month.”

Not only does Gardner play at parties, but he has also played at high school football games and White Station High School’s Black History Month performance in 2020.

“[The student performers and I] went through practice, rehearsed it, and we played music; we had fun through it,” Gardner said. “We taught … almost every student here something about Black history.”

Gardner plans to continue DJing as a career and is already making plans on what to pursue in college, possibly majoring in lighting and sound.

“I’m thinking either about going into Southwest [Community College] and majoring in one of their music departments in there, but most people told me I should go ahead and do four years and just get that and business school added into it because [DJing] is part of business because you have to entrepreneur everything in it,” Gardner said.

Gardner not only makes announcements at parties and events he DJs at, but he also does some announcing on the schoolwide intercom, which can be a tough job.

“I will say that it does get scary a little bit because you gotta think about what to say, if you mess up … [and] if you were screaming at it too loud,” Gardner said.

Heffner is a fan of Gardner’s DJing, and Gardner has even DJ’ed at one of Heffner’s birthday parties.

“If there is an event where Kaleb Gardner is DJing, I recommend to go to it,” Heffner said. “With the path that he’s on right now, he could possibly have a career in music production.”

Today, many teenagers are pushed to chase safe, traditional jobs and discouraged from jobs that reflect their interests. Gardner’s current success with his job proves this idea wrong, and he encourages other students to chase their own passions too.

This story was originally published on The Scroll on November 5, 2021.