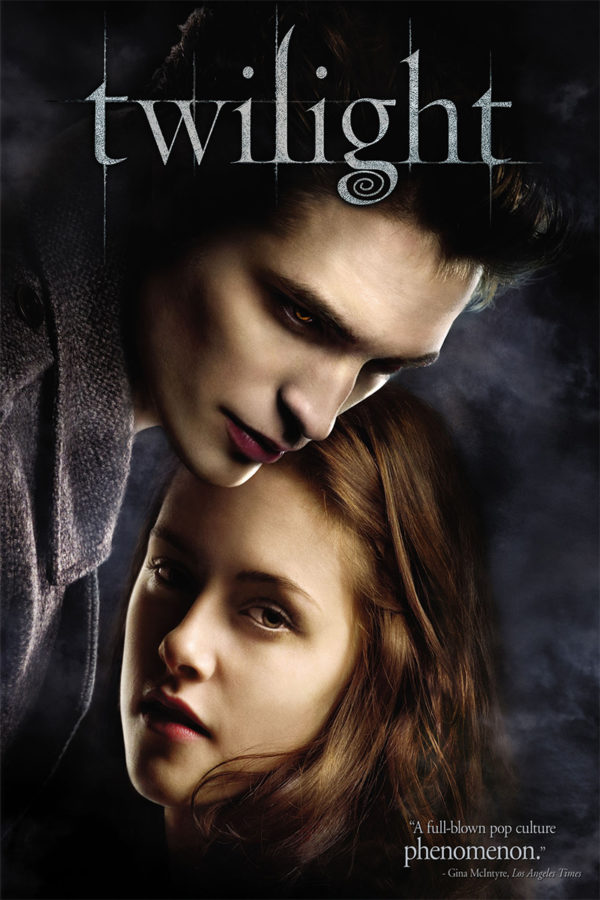 Lead actress Kristen Stewart and actor Robert Pattinson star in 2008’s “Twilight.” The movie was released in over 3,000 theatres nationwide and gained over 9 billion in sales.

The lights dim in the theatre and previews for future movies begin to roll. Fans wait anxiously in their seats for their favorite characters to appear on the silver screen. Soon, the infamous movie saga begins, and the long-awaited question is asked: Team Edward or Team Jacob?

Released in 2005, the “Twilight Saga” book series explores the life of protagonist Bella Swan after she meets 108-year-old vampire Edward Cullen. Romance blossoms between the two characters, and they must undergo a variety of challenges from ancient vampires, werewolves and ??. Throughout the years, the saga has received strong reviews on the writing and visuals; some being great, and others not so much.

“The first time I saw the movies was around 2016 with some friends,” Cayenne Stephens (11). “I initially thought, ‘Wow, this is one of the most terrible things I’ve ever seen. I love it, and I want to watch it again and again.’ It was overall a very fun experience because all of us would laugh and enjoy the movie. At the same time, however, the movies were awful.”

At its core, the “Twilight” movies can be interpreted in a multitude of ways. The early 2000s film franchise delved into technology and aesthetics that were new for its time, leading to a unique twist to the format of many supernatural movies of recent years.

“I would describe it as the early 2000s Hot-Topic and Forever 21’s intersection of happy sadness,” Stephens said. “Most of the movies had that blue tint to it. It was like the movies were trying to be deep, but they really weren’t.”

Since the book series and movie franchise were targeted towards teenagers and young adult readers, the saga has affected its younger audience greatly. Whether positive or negative, the impact of “Twilight” on the way some speak, behave and dress is evident.

“On one end, I learned to continue enjoying the things I like despite people making fun of it,” Naisha Panjwani (12) said. “On the other end, I spent my pre-teen years thinking Edward watching Bella sleep at night was romantic, which can’t really be healthy.”

With the revival of “Twilight” culture, many teens use social media platforms (ie. TikTok and Pinterest) to share their thoughts, memes and recreation of scenes and outfits from the franchise. The “Twilight aesthetic” has gained popularity in the past few months, causing a new rise of fans for the series.

“I think it’s really cool to have people falling in love with the series again,” Panjwani said. “Because of [‘Twilight’s’] spread through social media, it’s not hated on as a ‘teen girl thing’ anymore, so people can just authentically enjoy the series. Now at least when I make ‘Twilight’ references, some people actually get them.”

The effects of social media can be seen culturally. Similar to other fandoms, teens relate to some of the characters in the series which ultimately influences their personalities for a short period of time.

“It’s definitely made an impact on the overall vocabulary of teens and the way they dress. There is this certain desire for a ‘deep sadness’ [and] ‘main character’ sort of aesthetic that people try to replicate with Bella,” Stephens said. “Some try so hard to fit into these character archetypes, and it distracts from who they are as their own person.”

Many see the revival as a positive outcome because it allows for more people to be exposed to “Twilight.” Many older fans are thankful for the opportunity to share their love for the characters and talk about old theories again.

“I think it’s a great thing because I feel like certain movie and book series come back every once in a while,” Nedda Aflaki (11) said. “The revivals bring more people in the fandom to enjoy a series that they otherwise wouldn’t have known about. It’s also funny to go back and watch something that you used to like a lot.”

Microtrends, which are trends that last for a short period of time but can be replicated quickly, have been popular due to social media. While “Twilight” has been a prominent franchise for over a decade, some consider the recent resurgence as a short-term revival.

“I think the people that dress in the ‘Twilight aesthetic’ and the rise on TikTok would be considered a microtrend,” Aniya Jones (11) said. “There’s going to be a new wave of fashion that people will start to copy in a few months, and the ‘Twilight aesthetic’ will look outdated again. I can see it being very long term, but in terms of fashion and TikTok aesthetic, it’s probably not going to last much longer.”

Whether “Twilight” receives another revival or its popularity diminishes forever, the fans of the series will always be there to show their love.

“I think ‘Twilight,’ and its ‘Twilight Culture’ is one of those things that would never truly fade out of existence,” Panjwani said. “There actually was a ‘Twilight Renaissance’ back in 2018 for its 10-year anniversary, and again now since Netflix added the movies back. People get bored and move on quickly, but ‘Twilight’ always makes a return eventually.”

This story was originally published on The Scroll on November 5, 2021.