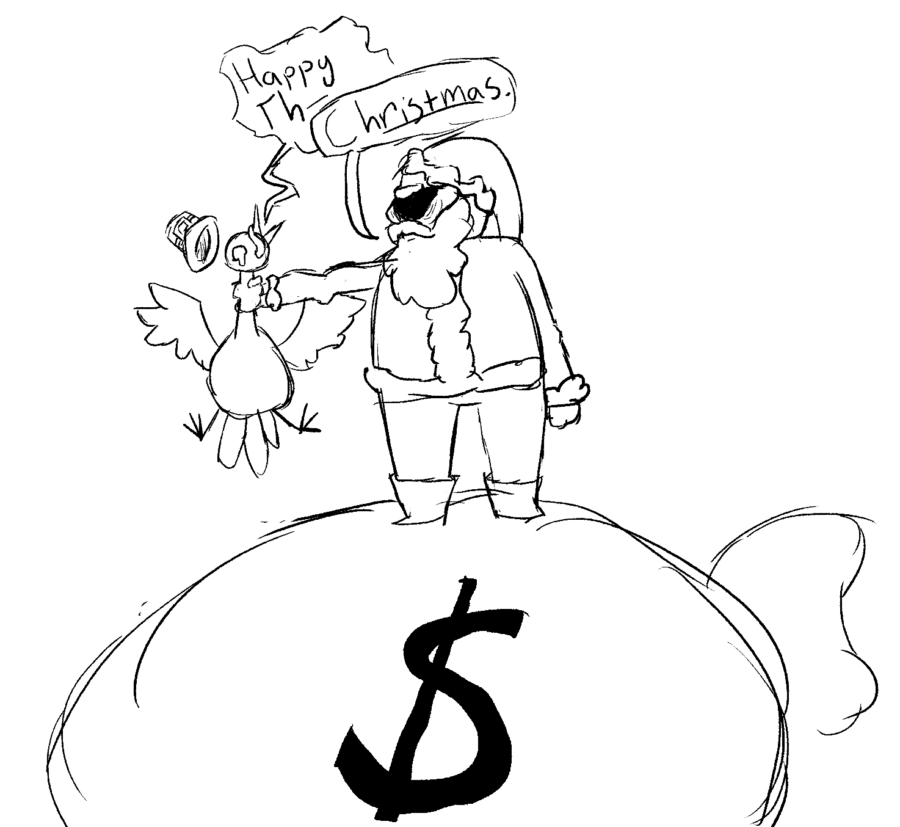 With the end of Halloween the greater population along with marketing campaigns tends to skip over Thanksgiving and turn straight to Christmas and the rest of the holiday season.

By Isabel Rodriguez and Owen Cummings

Lately, the traditional holiday season, which begins on the American Thanksgiving and ends on American New Year’s Day, has been blurred and has extended to before Halloween and ends almost as soon as the sun rises on Christmas morning. This has led to a widespread glossing over of several holidays, Thanksgiving in particular, as it falls directly between Halloween and Christmas.

Several reasons have been speculated as to why this is happening, such as wanting to spread holiday cheer earlier each year, but ultimately, each reason boils down to an increase in consumerism through shopping and marketing.

According to NBC, 27% of people who do holiday shopping started as early as September this year, partially due to shipping delays caused by the pandemic, and partially due to increases in online shopping as opposed to buying gifts in stores. “The last thing a parent wants is to miss out on that must-have toy,” Michelle Fox said.

This movement of Christmas shopping earlier and earlier has led to a lot of people pivoting to the yuletide attitude and mentality before they’ve even taken the time to be in the grateful mindset that Thanksgiving is supposed to bring. This is only furthered by the fact that this switch is driven by consumerism, not genuine belief that it’s time to celebrate.

On the other end of the spectrum, there are those who gloss over Thanksgiving due to businesses and stores putting the idea in their head themselves that the time has come. Many department stores, such as Walmart, Sears and Meijer, begin playing Christmas music over the speakers on Nov. 1, and places like Target replace their Halloween decorations with Christmas trees and lights halfway through October.

Lots of people operate under the aptly named “set it and forget it” mentality, that is, that as soon as the first radio station or store plays Christmas music, they believe that the time has come to devote the entirety of their car rides in the months of November and December to Christmas carols. This is yet another business strategy for radio stations, as they have the ability to capture the listenership of those who turn their station on and leave it playing for the season, such as Y94FM in Syracuse, who began their holiday rotation on Nov. 5.

All of this evidence points to the fact that Thanksgiving, a holiday widely publicized as a time to celebrate what one has and to be content with whatever place in life they may be in, seems to be abandoned for an increasingly capitalistic Christmas.

Thanksgiving, that holiday sandwiched between Halloween and Christmas, might deserve its constantly-overlooked reputation. Beyond the obvious: It will never generate as much profit for stores as the famed “day after” known as Black Friday and exciting decor is in limited supply- because really, what is there as far as “Thanksgiving decorations”? A hand-printed turkey? Fall wreaths? It’s a somewhat bland holiday, especially if your chosen head-chef forgets the salt in the mashed potatoes.

But that brings up the question, why is Thanksgiving really celebrated? Some will answer that it’s to bring families together for the holidays, and it’s an excuse to enjoy each other’s company, or just eat an obnoxiously large amount of food and then regret it later as you try and push a shopping cart through a crowded store to compete for the better deal on a flat screen TV. Hopefully, no one gives an answer that relates to the history of Thanksgiving, because that’s where things get tricky-the true reason that this holiday has a valid cause to be “Thankskipped” is its origins, which were made out to seem much different than their reality.

The American version of Thanksgiving is based on the settling of the British colonists in the “New World,” and is often taught in schools as a peaceful gathering of the indigenous people of Virginia and the colonists over food and entertainment.

But in an increasingly politically conscious climate, many of these encounters with the Native Americans that have been glossed over in schools in favor of depictions of togetherness have been retconned and become much more inclusive. What was once Columbus Day is now referred to as Indigenous Peoples Day so as not to glorify the horrific treatment the Caribbean people endured under the Spanish, and increasing numbers of textbooks have been updated with the perspectives of minority groups in instances where they should have been included ages ago.

Yet Thanksgiving remains, even despite being eclipsed year after year by Christmas, and there is some true emotional reasoning to be pointed out as to why it should continue to exist. While the false history of the Pilgrims should indeed be removed, the mindset that the holiday brings to those who celebrate it is a perfect antithesis of the Christmas season. A holiday to remind people to be grateful for whatever they choose to be grateful is important, and, while some devout Christmas purists may still celebrate Dec. 25 with this mindset, deep down, the majority of those who go through the motions of the holiday do associate it with being given gifts or holiday bonuses, rather than “the joy of giving.”

Perhaps a reevaluation of the holiday season is due, but at this current rate, and with the laughable track record most people have with any kind of resolution around the holidays, the possibility of abandoning consumerist instinct or a reformation of Thanksgiving is unlikely.

This story was originally published on The Chatterbox on November 16, 2021.