EXCLUSIVE: Behind the Lens with Sports Photographer Eric Espada 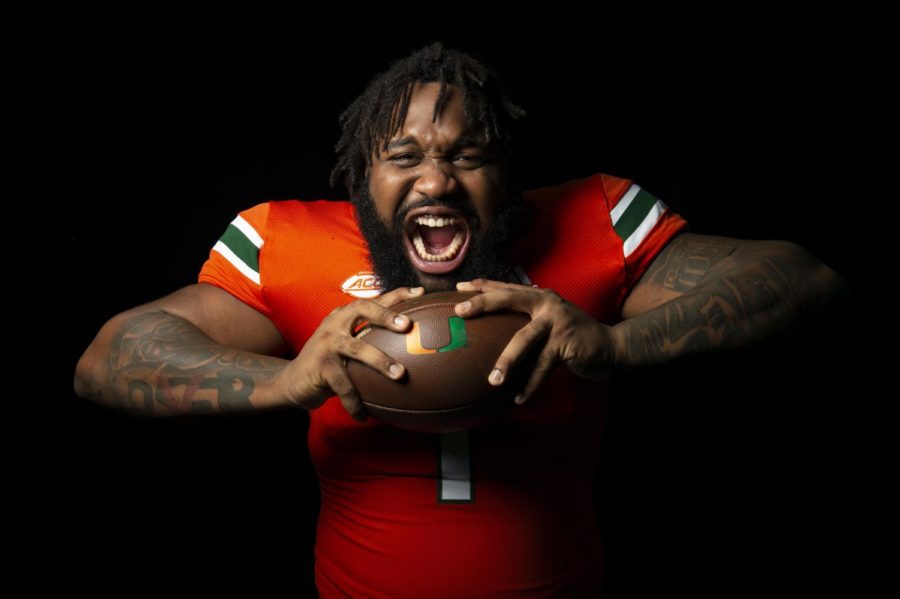 This photo of University of Miami's defensive lineman Nesta Jade Silvera is one of many emotion-filled photos Espada has captured of the Hurricanes throughout his career.

If you follow Florida sports, chances are you have seen the work of Eric Espada. A veteran sports photographer, Espada has captured some of the most iconic moments in Florida sports, most notably for the University of Miami, where he has been photographing for more than two decades. He also covers the Miami Dolphins, the Miami Heat and the Miami Marlins. He took time to walk us through what life is like on the sidelines behind the lens, capturing sports history as it happens.
Can you walk me through a day of you going to cover a game?
“For football, we have a team of 6 photographers that cover home games for the University of Miami. I usually get there about 4 hours before the start of a game getting things ready, making sure things on the backend are ready, and making sure there aren’t any issues with the connection. Then the team probably arrives about 2 hours before the game and that’s when I start to shoot. I’ll start shooting “Canes Walk” when the team walks through the fans. Then I start to shoot as they prepare in the locker room and also while warming up.  After warm ups,  I shoot the game.  In a typical game I’ll probably shoot somewhere around 4,000 images so it’s a long day, a long process, and a lot of photography.  They want everything covered, not just the game itself, but they want warm ups, lifestyle type photos, we shoot images of the fans, mascots, cheerleaders, and anything associated with the school. Among all of the photographers across the field, we probably shoot around 25,000 images in a game and it gets pared down so probably around 2,000 images per game that we end up keeping.”
What is your favorite part about going to the games?
“The really cool part is that I’ve made friends with a lot of people over the years.  Seeing what they come up with from their angles with their talents is really cool. I’m a really big proponent of team success, so I love to see what our team gets photography wise. I get super excited about things like that. And obviously the game is cool when you win; if you lose it’s a little tough.  But we do have two younger photographers on our staff and to see them grow is really cool, so I love to see their reactions when they get great shots and things like that.”


What is the hardest part about being a professional photographer?
“You have to be in shape because you do a lot of walking and a lot of getting up and down.  I don’t know how some of these guys do it, you have to have some good legs because you do a lot of walking and squatting.”
What is the best part about being a professional photographer
“It’s cool when people see a photo that you shot and they say ‘that’s my favorite photo of all time’ and that means a lot.  I’ve been shooting at UM for over 20 years and another cool part is seeing some of my photos on the walls and seeing my photos when walking into facilities, that’s really cool as well.  One time I saw some of my pictures on the side of a bus that was pretty awesome.  When you see your work bigger than life, that is really cool.”
What is your favorite sport to cover and why?
“Basketball is great and really fun to shoot.  A sport that I shoot, but don’t shoot it a lot, is swimming, which is really cool. I’ve put together some really cool images of divers jumping off the boards and those guys are amazing athletes so getting a chance to shoot those events is really cool.”
What is it like to catch a big play on film?
“There is a saying ‘if you saw the play, you didn’t make the photo.’  You have to stay grounded and keep shooting throughout the entire play.  Say you didn’t get the catch, but he does an amazing reaction if you get up you’ll miss it.  So you really need to stay with the play and follow it all the way through to the very end.”
What are some of your favorite moments that you have caught on film
In regard to the Miami Heat, when Dwayne Wade came back, he hit a game winning shot and that was a great moment.  There are some more games when the University of Miami beat Florida State and I took a shot of a touchdown at the very end that they won.  I have some really cool times when I have been in the locker room after they won and took some really cool photos of guys celebrating and getting excited.  A couple of photos of guys when they hit homeruns and they did amazing poses and backflips afterward, like Ronald Acuna Jr.  when he was a rookie.  Another one is when the University of Miami won the ACC title in basketball, which they have never done before—I got some really good shots there.”

This story was originally published on The Tribe on November 22, 2021.