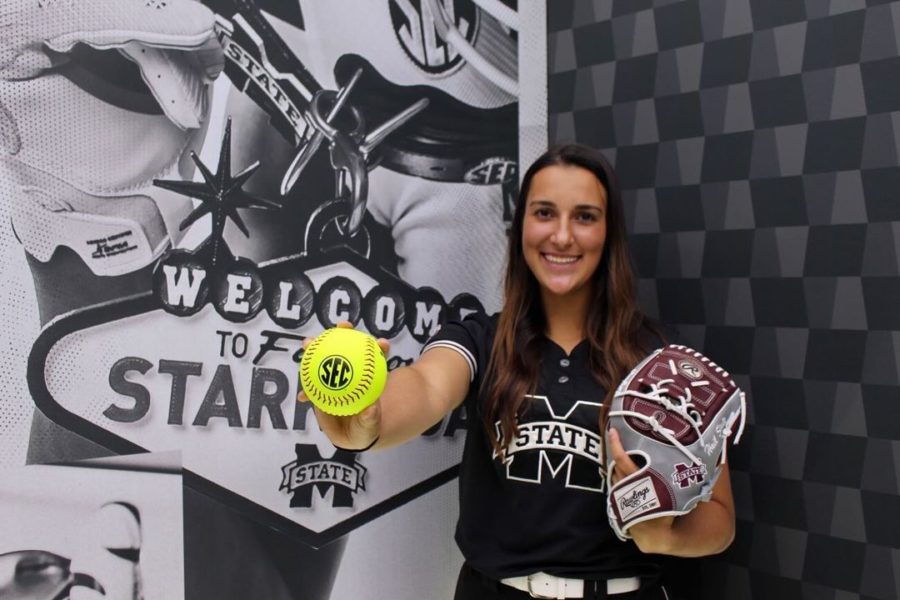 When she was only 10 years old, senior Gabrielle Coffey began her softball career. She set goals to play in college – and the Olympics – shortly after starting out.

Now, she sits in the arena, pen in hand, and signs her college commitment letter – thinking of her future.

Coffey has played for the varsity softball team since her freshman year while also playing for the Brazil Junior National team and Texas Glory Softball. Coffey signed her commitment letter to play softball at Mississippi State University Wednesday, Nov. 10.

“I chose to continue playing softball over other sports (volleyball and basketball) because of the emotion you feel when playing or watching it,” Coffey said. “There was just a different kind of adrenaline rush when I’m playing softball versus anything else.”

After playing for four years, Coffey had her first discussion with a college team.

“I chose Mississippi State University because at a young age they expressed interest in me,” Coffey said. “I was 14-years-old and in eighth grade when I decided I wanted to go there because of coach Samantha Ricketts, who is now the head coach. She made me feel wanted, and had big goals for me personally and the program. The family atmosphere, among the university, made the school feel like home.”

After her talk with Ricketts and MSU, Coffey began to focus on her long-term goal of playing softball – both in college and in the Olympics – by joining the Brazil Junior National Softball team her freshman year.

“I got involved with playing the Brazil Junior National Softball team because my dad is originally from Brazil,” Coffey said. “It’s always been my dream to play in the Olympics, and playing for the junior national team is a step in the process.”

With softball, school and sports medicine, Coffey said she became “extremely busy,” and learned the importance of time management.

“Balancing school, high school softball, select (Texas Glory), Brazil Softball and being an athletic trainer for the Prosper sports medicine program is definitely a struggle at times,” Coffey said. “But, in the end, it’s all preparation toward what I want to do for a living. My days are very busy because there’s so much I want to get done, but I had to learn how to prioritize and get things done efficiently so I can do other fun things.”

By her junior year, Coffey was playing for three softball teams, all while working as the head football student athletic trainer.

Coffey said her favorite part about playing softball is being able to play not only for herself, but for her team.

“Gabby is what I’d call a silent leader,” Coffey’s speed-and-strength coach Sergio Gonzales said. “She sets the tone and expectations at a high level. Her teammates like her and follow her.”

Coffey also said she hopes to use her softball commitment with MSU to help her continue her sports medicine goals – all while still focusing on softball.

“I plan on majoring in Kinesiology to become a physical therapist,” Coffey said. “Then, Mississippi State has a five years master’s program. So, I will get my master’s in nutrition, and I want to compete in the Olympics with the Brazil National team.”

As she moves forward, Coffey said softball has taught her how to handle failure, and use it as motivation to work harder – which she has carried into all aspects of her life.

“She’s very focused, determined and always shows up to work,” Gonzales said. “She’s also one that if a drill or exercise is done incorrectly, she insists on doing again. Failure is not part of her vocabulary – only learning.”

This story was originally published on Eagle Nation Online on November 19, 2021.