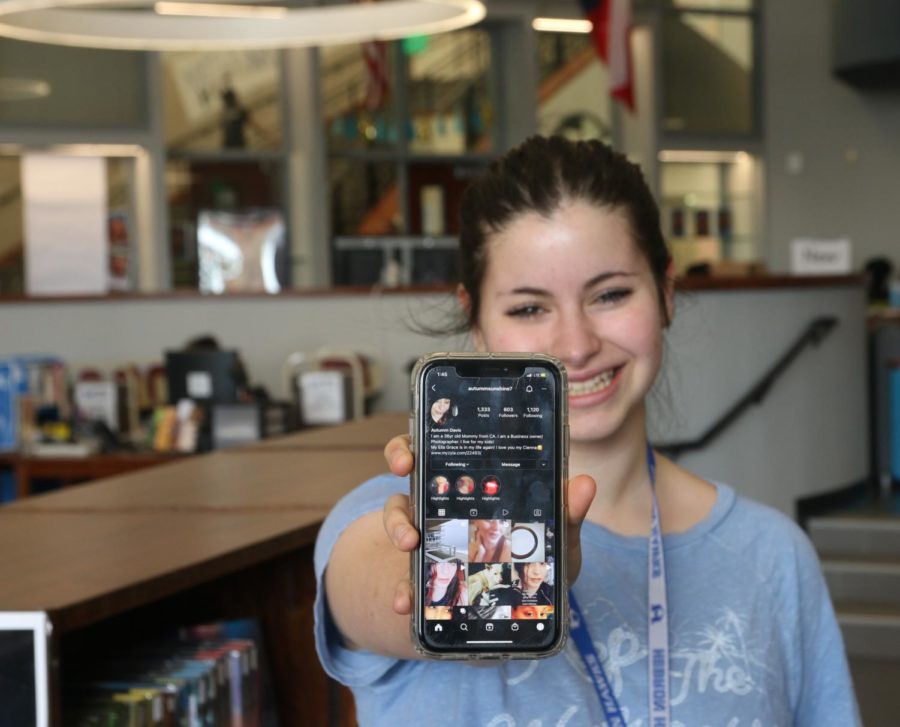 Sophomore Ella Underwood holds a phone with Autumm Davis’s Instagram account pulled up. In just the span of three years, Ella has found five new family members. “Having a new family is overwhelming, but I am thankful for having them in my life,” Ella said.

Ella sits in her bedroom, idly scrolling through Instagram and sees a message from a female stranger who liked her outfit. Ella texts back to say thank you, but soon, their conversation turns more personal. Ella’s heart starts to race, and her palms sweat. She jumps out from her seat to tell her dad, but the weight of the truth pulls her down: Ella had just found her biological mother and sister.

Sophomore Ella Underwood was adopted by Lesa and Leston Underwood in Kansas in 2004. Though she had always known she was adopted, she did not know any details about her birth mom with the exception of her birth mother’s name: Autumm. Ella’s adoptive parents wished for her not to meet her birth family until she was 18. But, in 2019, when Ella was 15, she was contacted by her half sister through Instagram.

Ella’s adoptive mother, Lesa, had ovarian cancer when she was younger, which prevented her from having kids, so she decided to adopt. The conventional adoption process involves extensive paperwork and can range from a few months to an entire year, depending on the state and adoption agency. Instead, the Underwood family took a different approach.

“[My parents] made letters and sent [them] out to everyone they knew,” Ella said. “My mom sent it to her college professor, and he sent it to this doctor in Kansas. The doctor told my mother that he had a 19-year-old patient who was pregnant and wanted to give up her baby. That 19-year-old was actually my birth mom, Autumm Davis. After that, my adoptive parents got in contact with Autumm and signed a contract to legally adopt me. They actually adopted me the day after I was born, and took me to their home three days later.”

Though Ella was unaware of her birth family’s whereabouts growing up, her birth family was able to see Ella’s life in some capacity through emails from the adoptive family. Moreover, Davis had three more children after Ella.

“I watched her grow up through video and pictures,” Davis said. “I received emails and letters telling me about her. She has always been a part of our lives. I told all the kids about her since they were young. They used to take her pictures and cuddle them and even kiss them goodnight. To us, she has always been in our life and always will be.”

By the time Ella was 13, she had learned another vital piece of information about her birth family: Ella had an older sister. In 2019, her older half sister, Alysondria Stonestreet, found Ella’s Instagram and messaged her.

“It was during the night,” Ella said. “I was at my dad’s house and just messing around on my phone. I got this follow request on Instagram from [a] girl named Aly. I followed her back, and she messaged me. We started talking. Then, out of nowhere, she tells me that I am adopted and that my parents are not my real parents. Though I already knew this, I was curious. I asked her what my mom’s name was, and she said Autumm. I started freaking out after that.”

That same night, Stonestreet sent Davis’s Instagram profile to Ella, and Ella was able to contact her birth mother for the first time. Moreover, Ella, who thought she was an only child, learned that she has four half siblings in California.

“It was a very emotional night for all of us, and it was crazy,” Ella said. “I started talking to Autumm. At first, she was a little worried because she wanted to follow my parent’s request, but I still messaged her. When I got up to tell my adoptive dad, I fell to the ground crying because [the incident] was so emotional and powerful.

After contacting Davis, Ella immediately called her adoptive mom, who was very supportive but surprised.

“Given the ubiquity of social media, I knew that eventually Ella would be contacted,” Lesa said. “I was just surprised that it happened so early. Ella is dearly loved by all of us, and we want nothing but the best for her.”

The last time Davis and Stonestreet saw Ella was when she was six months old. After that, Davis was restricted from contacting Ella until she reached 18. However, Davis’s eldest daughter went around that rule.

“I just had to meet her,” Stonestreet said. “At first, I was really nervous because I honestly wasn’t expecting a response. When I saw [Ella’s] name pop up, my heart was pounding because this was the first time I ever talked to her. I’m really glad I [messaged her], though, because she has become someone I trust. We would do anything for each other.”

Davis gave up her daughter due to the circumstances of her pregnancy. However, she strongly believes she made the right decision.

“I knew I couldn’t keep her,” Davis said. “When I met her parents, I felt an instant connection. They couldn’t have kids, and I felt that [Ella] would be safe with them. I wasn’t sure though until I saw them hold her after she was born. It was like a sign from God, and my only condition was that I would see her life in some capacity.”

Both Davis and Ella wish to respect Underwood’s adoptive parents’ wishes and will wait to meet each other in-person until Ella is 18. However, Ella might be able to meet Stonestreet earlier, since Stonestreet is planning to attend college in Texas.

“I want to hug her because I haven’t since she was six months old,” Davis said. “Even then, she hugged me so tight like she knew who I was. That was the last time I held my sweet girl. I can’t wait to catch up in person and take lots of pictures and hug. I pray that things continue in the best direction possible and that she knows I’ve always loved her and wanted her. I just tried to do what was best in the situation.”

This story was originally published on The Hawk Eye on November 18, 2021.