The “high” life at Inglemoor 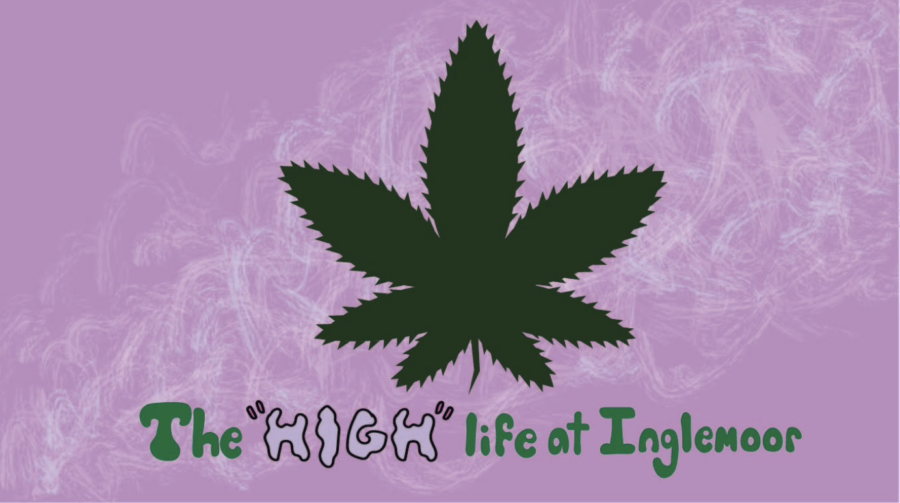 The use of marijuana has sparked concern among staff and students. How is this affecting our school?

In a recent Nordic News survey regarding marijuana, nearly 1 in 4 student respondents reported having used marijuana recreationally at least once. The use of marijuana and the impacts surrounding its use have become subjects of much recent attention and controversy on campus from students, staff and administrators. But in order to understand these numbers, one has to look at the reasons they are so high.

In terms of combined math and reading proficiency testing data, Inglemoor is ranked among the top 10% of public schools in Washington state according to  Public School Review. It also houses numerous high-performing clubs and demanding sports. In addition to extracurriculars, the International Baccalaureate (IB) program places heavy workloads on its participants. According to students, there is reportedly social stress and competition between students in both IB and AP classes, as well as general education courses due to the highly competitive nature of the school.

Senior Frank West* agrees that academic stress contributes to his marijuana use.

“IB has been incredibly overwhelming. I turn to smoking because it’s the only thing that takes the edge off these days,” West said. “I constantly feel like I have to be number one, because if you’re not in IB, you’re not doing enough according to the student population here.”

Staff members have also noted the pressures of the IB Program. Some teachers have said that the IB Program has caused negative impacts on the student body.

“This idea that kids are going above and beyond, and that somehow makes them better academically, when in reality, it’s just a lot more reading, a lot more writing and a lot more work. Your ability as a student is not better or worse,” teacher Manny Goldberg* said

Senior Clay Bensen* expressed similar sentiments about the IB program and connected it to marijuana use.

“I think there’s a stereotype that IB kids don’t [use marijuana], but it’s a lot more common than you think,” Bensen said.

Because of these academic stress and other anxiety factors, 10% of  students surveyed said they turn to marijuana as a coping mechanism.

“I smoke [weed] to take the stress off of school. Most of the time my anxiety is through the roof not only from homework but the pressure to simply perform,” senior Bailey Smith* said. “I’m a B-average student and even that doesn’t seem like enough to keep up with my peers.”

“It helps [me] decompress; I’ve used it as motivation to get my homework done,” Foster said.

Several students seem to agree that marijuana has had a positive effect in terms of handling academic and other types of stress, “[It] makes me feel better, which makes me engage more and [makes me] more excited to learn,” a survey respondent said.

The legalization of marijuana use for those 21 years or older means that the overall judgement against marijuana has faded, which has perhaps encouraged students to rely on these unhealthy coping strategies. However, while students may be using marijuana as a coping mechanism for their anxieties and problems in life, it is not healthy for developing brains.

History teacher Brittney Kim believes that social media plays a huge role in the prevalence of marijuana use. With exposure to false information about drug use, Kim said students are led to believe that marijuana can “cure” certain mental illnesses.

According to the University of California Berkeley, marijuana does not positively benefit youth that struggle with anxiety. If anything, the habitual use of marijuana can lead to higher levels of anxiety.

There are also students who argue that marijuana should not have a place in students’ lives. “I don’t like drugs or anything like that and it does make me feel uncomfortable. I also don’t like the idea of it affecting me if someone’s smoking in the bathroom,” one student survey respondent said.

Students have reported the majority of use at school being in the bathrooms, resulting in bathroom closures around school. Students said they have been annoyed by the repeating trend of bathrooms becoming off-limits because students had been smoking or vaping in them.

“The only way [marijuana use] is impacting me is that it’s closing bathrooms,” wrote one student survey respondent.

Another student wrote, “It definitely occupies bathroom stalls while people have to actually use the bathroom.”

“It kind of makes me angry. Bathrooms closed because it smelled so bad,” a third respondent agreed.

7.2% of all student survey respondents noted that they have used marijuana on campus during school hours or events, but the majority of students and staff are strongly against this.

“I don’t have a problem with people doing it in private like at home, but at school, the rest of us shouldn’t have to smell it and put up with [students] being high,” wrote one student survey respondent.

“Just don’t do it at school, [it’s] not the place” echoed another anonymous student survey respondent.

Senior Yolanda Gutterson* agrees that marijuana has no place at school.

“[It] shouldn’t be on school grounds, including purchases and deals,” Gutterson said.

Gutterson recounted an incident during their freshman year when marijuana was present in the classroom itself.

“The guy sitting next to me would take hits from his weed pen and blow it into his shirt,” Gutterson said.

They also recounted students dealing marijuana in the back of the classroom. Along with students, some teachers  also reported that they have experienced drug usage in their classrooms, leading to suspension and various administrative disciplinary actions.

Marijuana use is a prevalent topic among students, but teachers too are aware of the issue. According to a survey conducted by Nordic News of 36 teachers, about 20% of them reported witnessing a student use marijuana on campus during their teaching career.

“I think that students view this issue through the lens of their own experience and what they see from adults, rather than what health experts say,” wrote one teacher survey respondent. “Just like alcohol is incredibly detrimental to their health, marijuana is as well because their brain is still developing.”Teachers agree that marijuana should not have a place in students’ lives. Multiple teachers also note that marijuana could be a gateway drug: a substance that could lead the way to addictive and harder drugs.

“I believe that it may not cause immediate damage, however, it definitely has youth seeking a bigger high which can lead to more dangerous drugs,” wrote another teacher.

Along with teachers, administrators too have been vigilant about marijuana use by students.

“We are not surprised by these numbers, [and] we do get similar feedback from the Healthy Youth Survey,” said Principal Adam Desautels. “When you start to use marijuana before school [and] during school, there is a bigger issue there, and that’s when it becomes an issue.”

Evidence from the Nordic News survey and the Healthy Youth Survey suggests that students are facing issues with marijuana and other substance abuse. Multiple staff members noted that if a student is turning to drug use as a way to cope, there need to be rehabilitation opportunities such as counseling and hotlines put into place.

The reality of the situation is that marijuana use is prevalent in the school environment, both at Inglemoor and nationally. In 2017, the Vermont Youth Survey was conducted by the Department of Health to understand how much of the student population in Vermont had tried marijuana. After gathering their data, it was found that 37% of high school students between 9th and 12th grade had used marijuana at least once in their lifetime.

In addition, throughout the pandemic, the 2020 Monitoring the Future Survey showed that daily marijuana use increased in 12th graders by 0.5%, but decreased in 8th and 10th graders by approximately 0.2%.

The issue of substance abuse is typically glossed over when discussing marijuana use, but it is important to treat marijuana as the drug that it is. If you or someone you know is struggling with substance abuse, please contact the Northshore School District’s Safe Schools Program or the Teen Drug Addiction Hotline below.

This story was originally published on Nordic News on November 28, 2021.