Early decision should be abolished 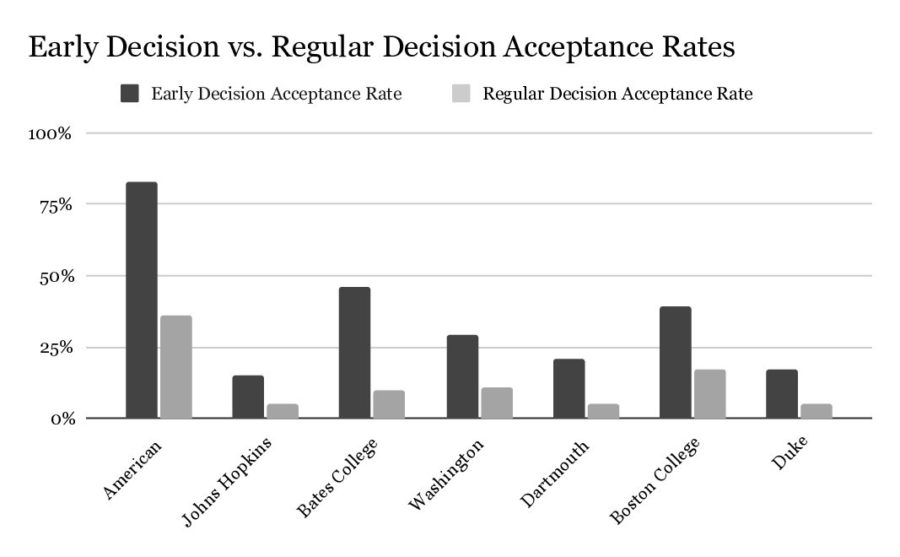 The difference between early decision and regular decision acceptance rates is stark.

College application season has kicked off for senior Tologs, and for those with a dream school in mind, they might have the option of applying early decision. If accepted early, students make a binding agreement to the school and no longer have to worry about college applications or admissions for the rest of the school year.

In addition to concluding the college application process early, early decision is beneficial because students have a higher chance of being accepted (see chart above).

Those who rely on financial assistance to attend college, however, are at a considerable disadvantage in the early decision process.

When students apply through the early decision process, they commit to attending that school if accepted. This means that applicants are in the position of having to accept whatever financial aid package the school happens to offer, which is something that only affluent students can do. While it is possible to decline an early decision acceptance, the process is cumbersome. Studies show that because of these factors, among others, it’s predominantly affluent students who take advantage of the early decision process.

“If you apply early, you are beholden to whatever package they give you. You need to know ahead of time that you can pay whatever they want you to pay,” Assistant Principal for Curriculum and Instruction Mrs. Sherrie Singer said.

Students who need financial aid and apply regular decision to multiple schools compare financial aid packages from a range of colleges that accept them. Students who apply early decision are dependent on the financial aid offer of only one school and are committed to attending before even seeing the package.

“Most schools use merit aid to attract their ideal students. If a school knows you will attend regardless, there is really no reason to offer you merit aid. It’s not impossible to get merit aid, but if you need to compare financial aid awards between schools, early decision is not the best option,” Abril Hunt, an outreach manager at Educational Credit Management Corporation, a nonprofit centered on helping families afford college tuition, told U.S. News and World Report.

If a student is accepted through early decision but must decline their acceptance due to financial constraints, they face a complicated process.

“You can’t just be like, ‘Cool, I can’t afford it, bye,’” Dr. Candy Navarro, FSH’s former director of college counseling and advising, said.

There are many steps students need to take in order to decline an early decision acceptance.

“[The colleges] make you kind of jump through hoops and provide documentation of why the financial aid they’re providing is not doable for the family. You have to provide financial documents showing that you cannot actually afford the tuition. Once the family has provided documentation, the colleges could release the student from the ED agreement,” Co-Director of College Counseling and Advising on the Hill Mr. Roberto Dimas said.

Early decision gives students a higher chance at acceptance but is geared towards students from wealthy households who don’t have to worry about tuition costs or applying for financial aid. This leads student populations at competitive schools to be disproportionately from high-income families and presents an equity issue for lower- and middle-income students.

Fortunately, it seems that the early decision process might be evolving. After recognizing the inequity of the process, schools have recently begun pulling away from early decision applications.

For example, starting with the 2020-21 school year, Princeton became the first Ivy League school to stop accepting early decision applications, and Havard and Yale have followed suit. As more colleges and universities begin to abolish the process of early decision, there is hope for more economic diversity within educational institutions and hope for more opportunities for deserving students outside high-income brackets.

This story was originally published on Veritas Shield on December 16, 2021.