The Problem with Romanticizing Toxic Relationships in the Media 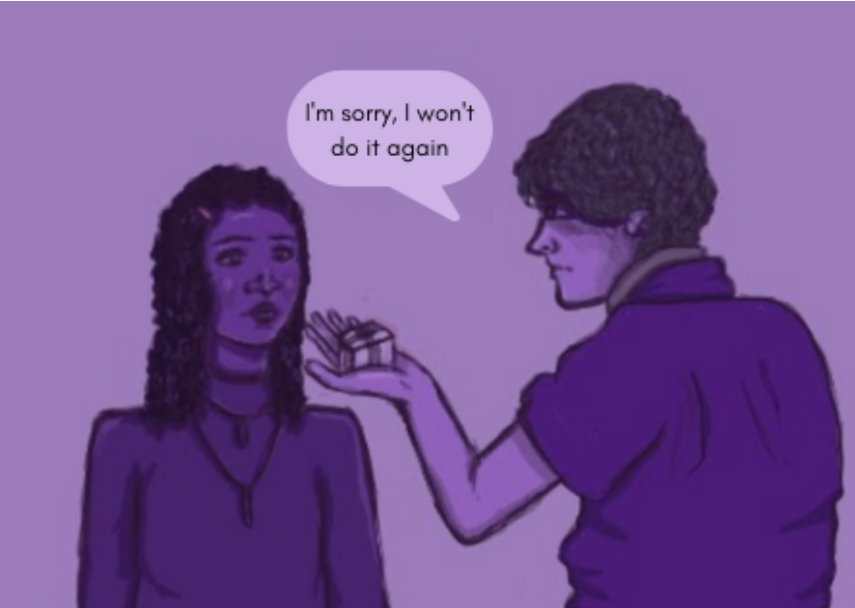 Constantly making the same mistakes and asking for forgiveness through gifts or apologies is a sign of toxicity. The purple tones symbolize an abuse of power and frustration.

By Maha Laiq and Nora Mehadi

Ah, love is in the air. Passing notes in class, holding hands awkwardly, slow dancing in the school gym, cheating, manipulating, mocking–wait–when did this flawed portrayal of romance become present in the media?

With romance occupying an entire genre in books, movies, and television shows, toxic portrayals of couples have become increasingly visible. From blurring the lines on consent to mistaking jealous behavior with “passion,” far too many shows, movies, and books have depicted romantic relationships in the wrong light.

Edward and Bella, Chuck and Blaire, Aria and Ezra: these are a few of the many problematic couples that are portrayed as “power couples.” Far too often, productions or books show unhealthy couples and present them as the epitome of romance.

In the movie series “After,” based on Anna Todd’s bestselling books, Hardin and Tessa navigate their familial issues, college life, and, ultimately, their relationship. Though a seemingly innocent and harmless storyline, the protagonists constantly abuse each other emotionally. In the series, Hardin makes a cruel bet with his friends to get closer to Tessa. When Tessa discovers the truth of the bet, she eventually forgives him and makes it a mission to “fix” his inner demons. The movie adaptations of the books made an estimated amount of $123 million worldwide. It is alarming that millions of young fans enjoyed and perceived this as a romantic relationship.

Unique Alston (12) watched the movie “After” last year and recalls the red flags in Hardin and Tessa’s relationship.

“He started dating her because it was a dare,” Alston said. “That guy was insane. He wanted to please his friends and everyone else. He was aggressive and self-conceited. I can’t believe how they portrayed that as romantic.”

Even in shows directed at younger children, some couples present corrupt ideas of relationships. In the teen sitcom “Victorious,” a show broadcasted by Nickelodeon, Beck’s behavior towards Jade was problematic. To viewers, Jade’s anger and jealousy towards Beck’s behavior were made to appear comical to children.

Beck never says anything when other girls flirt with him and dismisses Jade when she communicates her feelings on his actions. In the ninth episode of the first season, “Wi-Fi in the Sky,” Beck mentions to Jade that he is pet-sitting for his cheerleader neighbor. This provokes a jealous response from Jade. Beck never addresses Jade’s worries and keeps her jealous and upset for hours.

“Re-watching Victorious when it came out on Netflix last year was a real eye-opener to their relationship,” Taj Oli (12) said. “It’s almost concerning that children watching this type of relationship think that it’s funny.”

Unfortunately, the media targets a young and impressionable audience that is beginning to navigate relationships: teenagers. When such media is created, the result is a generation that doesn’t truly understand the difference between a healthy relationship and an unhealthy one, increasing the possibility that they will fall victim to one as well.

The implications of these offensive storylines aren’t just that young people begin to idealize problematic fictional characters, but also that they begin to understand this as the status quo. That this behavior is normal. That an older person expressing interest in a teenager makes them a passionate forbidden lover.  That if an abuser is conventionally attractive and they tell you they “love you,” that relationship is worth fighting for because they can just be “fixed.” We shouldn’t be urged to feel like any relationship of this sort is worthwhile, and anything close to romantic.

According to Julia Lippman, a postdoctoral fellow at the University of Michigan’s Department of Communication Studies, young people’s minds are essentially free for the media to mold. These not-so-perfect portrayals of love, whether they be on our TV screens or books, have a profound effect on how we view relationships.

At what point are Hollywood producers and authors going to draw the line on what a villain is? When will movies and books stop portraying objectively horrible behavior as acceptable because someone is traditionally attractive? When are they going to stop feeding the narrative to young people that if someone hurts you, it secretly means they like you? That they deserve forgiveness because they have a “dark past.” That if they restrict you, or outright say they own you, you should feel flattered by their possessiveness?

We don’t need to stop creating movies and books about imperfect couples. Of course, we need to acknowledge that every relationship has issues. However, we shouldn’t mistake “imperfect” as “unhealthy.” It’s time to start idealizing the relationships that have flaws, but are still healthy at the same time.

Eleanor and Chidi from NBC’s “The Good Place” have their issues, but they remain a healthy couple. In the show, Eleanor and Chidi have died and end up meeting each other in a bizarre afterlife. Throughout their time in the afterlife, they are constantly rebooted, losing their memories, and sent on crazy missions and stressful situations surrounded by actual demons (since it’s the afterlife). Nevertheless, one aspect remains constant, Eleanor and Chidi always help each other grow as individuals.

When the world around them was chaotic, Eleanor and Chidi had every reason to turn on each other. Yet, they never did. They constantly displayed healthy communication and trust, and always thought highly of one another regardless of outside influences. Similar to any healthy couple, they had their fair share of mishaps and flaws. Eleanor and Chidi would fight sometimes, many times in the beginning, when Chidi couldn’t understand Eleanor’s inability to be good. However, when a fight occurred, Eleanor would always think about how she appreciates Chidi’s help. She would thank and apologize to Chidi.

Rather than glorifying toxic relationships, let’s glorify the ones that are actually romantic and healthy. Romance media needs more Eleanors and Chidis and less Bellas and Edwards.

This story was originally published on The Charge on January 6, 2022.