Opinion: ‘Don’t Look Up’ reveals explosive truths about the world we live in 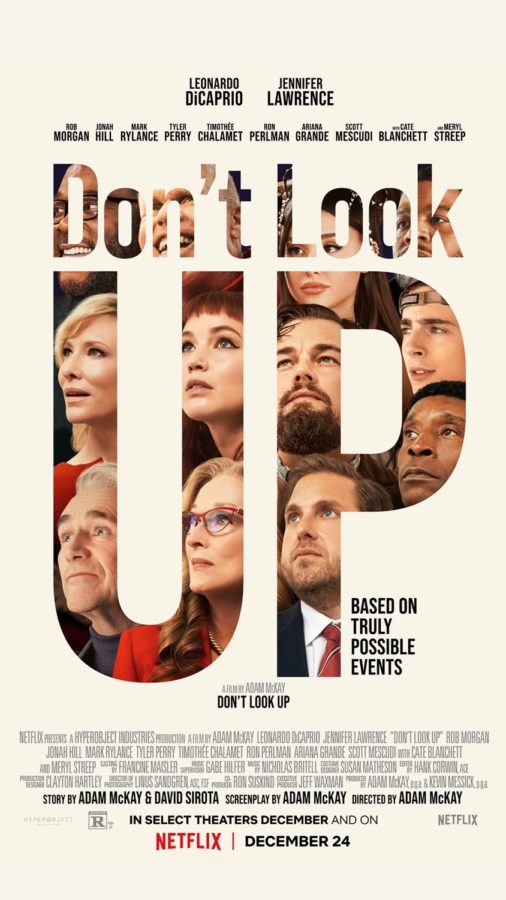 *This article contains spoilers for the movie “Don’t Look Up.”

When Kate Dibiaski looked up at the night sky and saw a large figure falling from the abyss, she knew the world was about to come to an end. All of the stress, hard work, and panic of the past few months had been for nothing.

“Don’t Look Up” is a recently released satire drama in which scientist Dibiaski (Jennifer Lawrence) discovers an existential comet headed towards Earth. Formidable efforts by many characters are clouded by the ignorance of others. In the end, the failure to stop the comet ultimately leads to the extinction of all life on Earth.

“The movie ‘Don’t Look Up’ is satire. But speaking as a climate scientist doing everything I can to wake people up and avoid planetary destruction, it’s also the most accurate film about society’s terrifying non-response to climate breakdown I’ve seen,” said climate scientist Peter Kalmus in an article he wrote about the movie.

Viewers can perceive the movie as an allegory to the threat of climate change in our current world. The movie’s ending exhibits the appearance our planet will take if we continue to undermine and ignore climate change and other pressing global issues.

Some found it to be an interesting metaphor for the world’s struggles with the COVID-19 pandemic and the refusal of many to either accept the disease as a viable threat or change their habits to prevent its spread.

“It was an interesting analogy for the COVID-19 situation in the US right now by representing the invisible threat of COVID-19 with a physical comet,” said Andrew Ghazouli, senior at Carlmont High School.

“Don’t Look Up” also emphasizes other problems faced globally, with issues in politics and human greed being a key focus.

Such greed is exemplified when Peter Isherwell (Mark Rylance), a tech billionaire discovers that the comet holds precious minerals. After this discovery, Isherwell discards his original plan to save Earth, creating a new, more dangerous one with significant room for error that would allow him to gain possession of the trillion-dollar minerals.

Isherwell and President Janie Orlean (Meryl Streep) present the new idea to the public as the safest and most logical option to save themselves from the comet. But in reality, the motive behind the new plan is capitalism and profit. Isherwell cares more about his own self-interest and potential financial gains rather than economic and planetary safety.

“The resources from the comet were so valuable that the billionaire was willing to compromise Earth to get them,” Said Zhanna Paredes, a sophomore at Carlmont High School.

Rylance’s character represents a myriad of billionaires and companies such as Mark Zuckerberg, Elon Musk, and Jeff Bezos, who highlight profit over worldly issues.

In the movie, Isherwell defends his plan by arguing that the rare minerals will create many jobs and provide enough money to end poverty and world hunger. However, his current abundance of money, which he conceals for selfish reasons, could be used to make significant strides to fix the same issues. Isherwell’s character demonstrates striking similarities to many of the extremely wealthy, corrupt, and capitalist-driven classes in society.

Isherwell’s character also represents large businesses like Shein, a fast-fashion clothing company. Shein uses sweatshops, child labor, thousands of plastic bags a day, and other unethical and unsustainable practices. However, the profit that results from these practices makes the company unwilling to change and care about its impacts.

President Orlean is a clear representation of Donald Trump. She has arrogant, selfish, and narcissistic tendencies, and leads by telling the country what they want to hear instead of what is actually true. Her response to the comet could mirror Trump’s response to the COVID-19 pandemic, where he first insisted the situation was under control and not a big deal to appease his followers.

Jason Orlean is a take on Donald Trump Jr., Ivanka Trump, and Jared Kushner, giving an outside view on the nepotism that commonly takes place in politics.

Bina, a singer in the movie, represents the world’s fixation on unimportant celebrity news rather than real-world problems. This fixation is represented when Bina goes on live television the same day as the scientists, who are warning about the comet. However, her news about a breakup takes up the majority of air time and the majority of viewers’ attention.

Celebrity news, which has no immediate effect on most of the population, overshadows many important topics and crises. People would rather talk about Bina’s new breakup than the rising sea levels caused by climate change.

Lastly, Dr. Mindy gives a perspective on climate scientists. Many scientists continually present facts, data, and predictions to show what is happening to our world regarding global warming. Yet, many don’t believe climate change is a problem or don’t believe in it at all.

In the movie, the characters have time to stop the comet. Dibiaski and Dr. Mindy had a plan to knock it out of its path, preventing it from hitting Earth. But when they didn’t follow through with the original plan, it was too late. The comet, now unavoidable as a result of the selfish nature of humanity, took out the entire world.

For years scientists and climate activists have urged us to take immediate action on climate change. But a significant number of people think we have more than enough time. However, this movie demonstrates if we don’t act soon, we will run out of time, and no matter how hard we try, climate change, like the comet, will be irreversible.

But by the end of the movie, even those who believed the comet was non-existent or not a threat realized their views were incorrect. Because by the end of the film, the comet had become visible for everyone to see with their own eyes, allowing the entire world to realize their life was about to end.

Although the movie brings up ideas on both climate change and politics, the story’s central theme is that of existential crisis and their effects if not dealt with.

If we wait until the threat is plainly visible to everyone’s eyes, it will be too late. We need to act on the effects of climate change now to save our planet, our lives, and simply the future of life on Earth. “Don’t Look Up” serves as a reminder of that.

This story was originally published on Scot Scoop News on January 6, 2022.