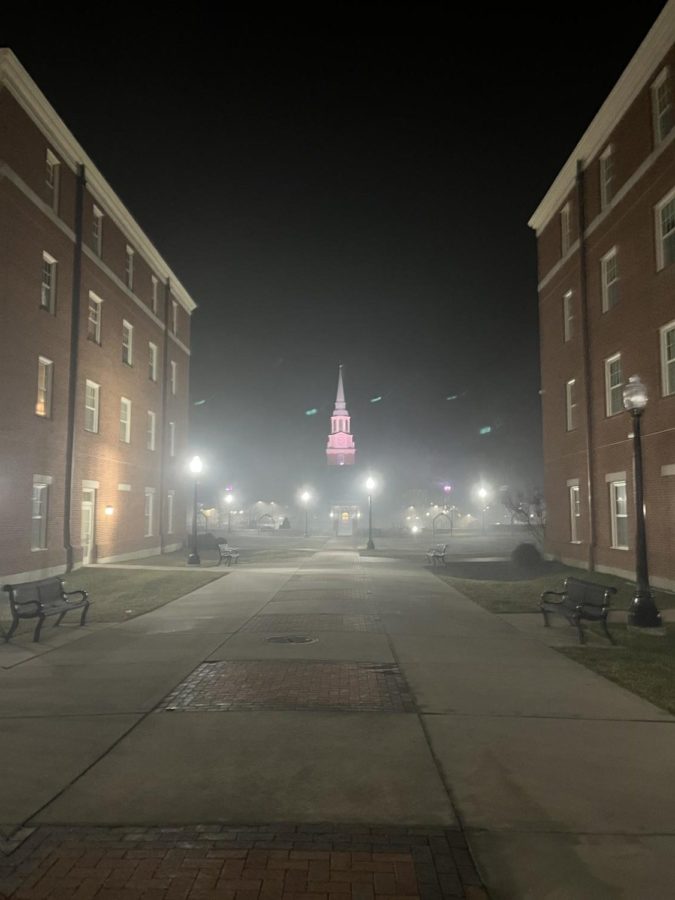 From Polo Residence Hall, the smoke from the fire obscures Wait Chapel.

The fire at Weaver Fertilizer Plant that began on the night of Monday, Jan. 31, continues to affect the Wake Forest and Winston-Salem community. About 1,000 Wake Forest undergraduate and graduate students live within the one-mile-wide evacuation zone surrounding the plant, and those living in that area have been asked to relocate for at least 48 hours.

Some on-campus students, not included within the one-mile radius, chose to evacuate because of concerns surrounding their safety.

“I do not feel safe on campus at this time, so I did evacuate even though I wasn’t within the one-mile radius,” said freshman Anna Grace Shoaf.

Some students who live on campus, like sophomore Lauren Franques, could not stand the poor air quality and decided to not only evacuate off campus but to leave Winston-Salem altogether.

“When I walked outside, my eyes were burning, and I felt really bad,” Franques said. “So I just felt like it was better to get off campus.”

Franques described the evacuation process as chaotic, even surreal.

“It kind of felt like I was in the plot of a movie,” Franques said. “I did not want to imagine it at first. I heard people running down the stairs and getting into cars. There was a definite sense of panic.”

She said the process was especially complicated because she received no clear instructions from the university on what to do as a student outside of the evacuation radius.

“I wanted to wait until the university told us what to do,” Franques said. “We were reading [information] from news sources that we could find on Google. Then we decided to leave, and campus police actually drove us into the blast radius to get our cars.”

“At a moment of uncertainty, the university took the right step to cancel classes,” al Hashimi said. “As a student living off campus, going to campus did not look safe to me, especially since there was smoke everywhere.”

While many were pleased with the cancellation of classes, students still expressed their concern over the university’s communication being insufficient and delayed.

“I was surprised by the university’s lack of response to such an unstable situation, and the fact that we have not received much information is appalling,” Shoaf said. “There is not much transparency between university administration and students.”

Jack Bradley, a sophomore who lives in Taylor thought the university’s response could have been much quicker. Bradley was especially concerned about the fire because he has asthma.

“I shouldn’t have to first learn about emergencies through YikYak,” Bradley said. “There should be better, faster communication from the university about something this pressing, especially when students are scared and confused.”

He continued: “I became worried about [my asthma] when my suite started to smell weird last night. The air quality definitely affects how well I can breathe, especially during the winter, so I was a little alarmed.”

Parents were also concerned about the situation, especially since many of them do not live near Winston-Salem. Kimberly Upchurch is a parent of a Wake Forest sophomore who was pleased with the way the university communicated with students.

“As an out-of-state parent, I’m very supportive of Wake Forest’s policy to inform the student first,” Upchurch said. “It looks like they followed that, calling and emailing students through the alert system. This allowed my student to handle getting the information she needed to make a good decision.”

Nena Vaghela, another parent of a sophomore student, thought the administration responded well to students but should have done a better job of informing parents.

“The evacuation order was a good idea for those who could [evacuate],” Vaghela said. “It was a good response from Wake Forest to put students in the library who couldn’t leave campus because of transportation or choice. I understand our students are adults but a robo-call in the event of these types of emergencies would help inform parents sooner.”

Although many aim to look for definitive answers during this unsettling time, Dr. Dean Franco, Professor of English and Director of the Humanities Institute at Wake Forest gave insight into how the fire may affect the community’s perception of Wake Forest being isolated from the surrounding city.

“Disasters such as this one should prompt the campus community to reflect on where the university is located,” Franco said. “We often speak of the Wake Forest ‘bubble’, but that’s an internal perception and not a reality.”

He continued: “In fact, the university is situated in a historically complex area, where the geography tells a real story about racial separation, economic immobility and environmental degradation. When Wake Forest is suddenly made to encounter the neighborhood of which it is a part, it should be the beginning of an openness and an address to the problems of its locale, and not a time for emergency retrenchment.”

During this time, students, parents and faculty are feeling a broad range of emotions, but the university continues to work with environmental-health experts and the Winston-Salem fire department, according to the Office of Communications and External Relation’s recent email, to assess the health and safety of their students.

This story is part of the Old Gold & Black’s ongoing coverage of the Weaver Fertilizer Fire.

This story was originally published on Old Gold & Black on February 1, 2022.