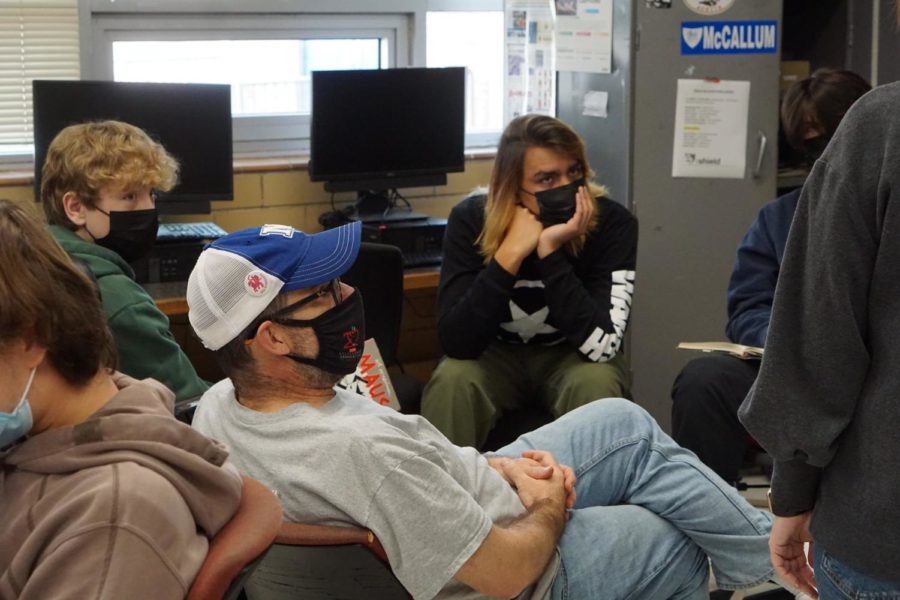 It began with the display of a hateful banner above MoPac Boulevard. Next, Jewish Austinites began to receive hateful letters. And then, as if in culmination of these prior acts, a local synagogue was set on fire.

Though not new, a wave of antisemetism surged throughout the nation this year. Austin is no exception.

In response to these crimes in Austin, principal Nicole Griffith and other principals in AISD sent out a message of support for the Jewish community. Upon seeing the message on the MacJournalism Instagram, senior Eden Goodman, who’s Jewish herself, commented on the post with a request for better Holocaust education in school.

“The reason why people are so antisemetic is because there’s no education,” Goodman said. “After the Holocaust, a big thing that was said was, ‘Never again. This will never happen again.’ And, obviously, it hasn’t happened again, but we are kind of on a really scary road.”

Goodman has experienced antisemetism at McCallum firsthand. She says that while some of it is the result of ignorance, the responsibility of educating people shouldn’t fall on her.

“Some of it is microaggressions, like, people ask me really inappropriate and dumb questions,” Goodman said. “And it’s just like, it isn’t my job to educate people because I’m Jewish. I’m happy to educate people, but I think this is something that needs to be the teacher’s job, because it’s really tiring every day for people to ask me questions, like, ‘Oh, since you’re Jewish, are you rich?’ It’s just stereotypes.”

Taking matters into his own hands, journalism teacher Dave Winter launched a Flexible Instruction Time (FIT) class with the purpose of learning about the Holocaust through reading. He chose to teach Maus, a Pulitzer Prize-winning graphic novel by Art Spiegelman. It details the events of the Holocaust from the perspective of a Jewish family forced into hiding. The book makes use of a metaphor depicting Jewish people as mice, and the Germans as cats.

Freshman Noah Braun, who joined Winter’s FIT class, said he has learned a lot from Maus about the harsh realities of the Holocaust.

“Really, nowhere was safe,” Braun said. “And you kind of heard about that before, but Maus really demonstrates the scale. And with the illustrations and all, it really helps you to grasp how desperate and important that situation was. Maus being a graphic novel actually helps the way it conveys the story a lot.”

Sophomore King Perez Cude is also in the class, and he agrees that the book is one of the more accessible ways for students to learn about the Holocaust.

“It’s a very good book,” Perez Cude said. “It’s very palatable for young audiences, and it doesn’t get too intense.”

Evidently, some disagree about the educational value of Maus. This January, a school board in Tennessee banned the book from its eighth-grade curriculum. Braun is shocked that the book would be banned.

“I would definitely say that it deals with darker ideas and really emotional subjects about family dying and losing basically everything you have to something you don’t completely understand,” Braun said. “But I would say that the material is definitely suitable and important to learn, and I feel like removing that and taking away the opportunity to learn through such an accessible medium goes against everything that a school would try to teach. Like, this is taking away knowledge. That’s just absurd.”

Winter agrees with Braun that Maus is a good choice for informing students about the Holocaust. In fact, he has taught the book before. When he was an AP U.S. History teacher, he lent his copy to a student named Mo Phillips-Spotts. Now an adult and living in Chicago, Phillips-Spotts agrees that Maus taught her an important lesson.

“I think we have to acknowledge the atrocity of the past so that we can move forward,” Phillips-Spotts said, “So that things don’t keep happening.”

Phillips-Spotts concedes that it’s difficult for young students to learn about atrocities.

“It’ll be hard, I’m not gonna say it’s not gonna be hard, but I don’t think it’s anything they can’t handle,” Phillips-Spotts said. “I think at that point, they’re still learning and growing. I think it helps them be more empathetic because they know that this happened.”

Goodman also acknowledges that the events of the Holocaust can be disturbing for young audiences. In fact, she was disturbed when she first encountered Holocaust education in second grade. But for eighth graders reading a graphic novel, she argues, the content is appropriate and necessary.

“I don’t think elementary schoolers need to read it, but I also think that it’s really important to see these scary, disturbing, uncomfortable things,” Goodman said. “If you’re not uncomfortable, you’re not going to learn.”

Librarian Jain Orr believes it is her duty as an educator to allow students to take learning into their own hands. In fact, she has almost completely removed herself from the book selection process, opting instead to stock the library according to student requests. She doesn’t believe in censorship.

“I think it’s almost like an oxymoron, like, it’s contrary,” Orr said. “If I’m telling you what to think, then you’re not doing the thinking on your own, and the point is that you develop that. And I think the best way for that is just having that freedom to explore your interests.”

Orr recalls a quote she read at the United States Holocaust Memorial Museum: “When books are burned, people are burned.” Orr thinks that this perfectly sums up why books are so important for learning.

“Books symbolize ideas from people, and it’s almost like you can take a book off the shelf that’s from 200 years ago, and you’re transported into the mind of someone from 200 years ago,” Orr said. “It’s just this incredible device of time travel and communicating, so when you try to silence something like that, you’re silencing a person.”

This story was originally published on The Shield Online on February 18, 2022.