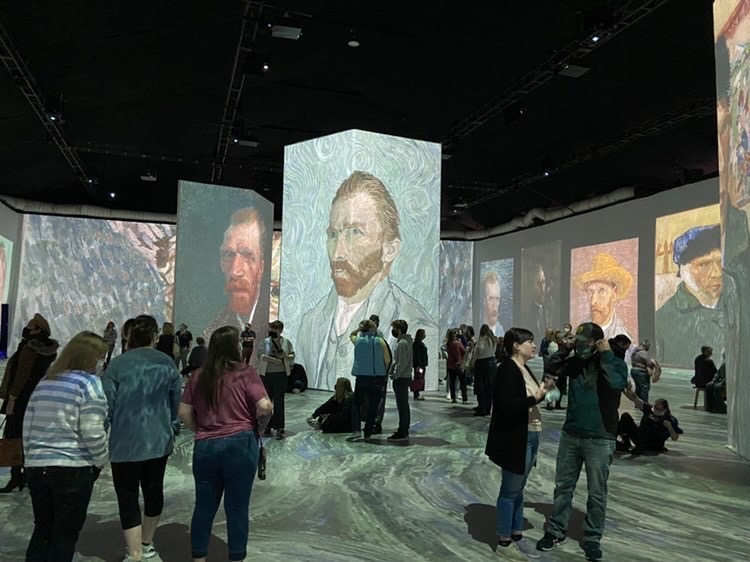 Sanjana Iyer, senior, attended the Van Gogh exhibit with a group of friends and said it was inspiring for artists to be able to see that someday thousands of people will be recognizing their work. “I really got to see the way art can become life and how you can turn something into art from any medium,” Iyer said.

Forced into isolation and boredom during the rise of the COVID-19 pandemic, Frisk Harris, senior, began to search for something to occupy their time. Though they picked up a variety of hobbies such as skateboarding and baking, Harris found a passion in an art form they’d never thought to explore.

“Two years ago on my TikTok, I was seeing a lot of people shaping pottery and stuff,” Harris said. “I thought it would be kind of cool to try.”

Though many businesses were closed, Harris sought out and bought clay wherever they could to begin molding it. When they returned for their senior year, they took up a ceramics class to continue working with their newfound passion.

Though ceramics is an art form that dates back to 28,000 B.C.E., with the oldest artifact being a clay figurine, students and staff have turned back to art as a hands-on form of expression to keep themselves occupied while in quarantine.

For some, art is a past-time. For others, it is an expression of their emotions.

This school year, 605 students are enrolled in art classes, but the mediums of those arts vary.

Farren Miller, senior, took a liking to painting as a kid by observing her grandpa as he painted, and has been committed to it since. As a current AP Art Studio student, Miller said she experiments with a plethora of mediums; however, she predominantly works with paint.

“Typically, I go for realism, but recently I have been trying to do some impressionism or renaissance style art, as well as some styles of abstract,” Miller said. “Also, I like mixing realism with some of those styles as well to get an interesting look.”

In a time when tactile art is being swapped out for digital art, Miller said she aims to capture new concepts more traditionally.

“Cartoonism is pretty popular right now, and it might bring back nostalgia to some in the future, but for me, I will always prefer realism and traditional artwork,” Miller said.

Such an interest in art isn’t limited solely to paint and canvas. For Rishabh Sabnavis, junior, photography is his preferred medium.

Sabnavis is enrolled in Advanced Photography and takes photographs recreationally.

“I mainly work with current photography styles but through traditional technology,” Sabnavis said. “For example, I prefer film photography but in an urban landscape.”

Sabnavis said he captures and communicates different cultures and lifestyles through his photographs and hopes future generations will interpret current photography as versatile and capable of storytelling in a single snapshot.

“Our photography right now will influence what people think of the people in our time period, just as photos from the 90s and 80s show us what their lives were like,” Sabnavis said.

As art continues to pick up the nuances of the time period, historians can better understand what it was like to be alive during that time.

Dr. Kristina Kleutghen, associate professor of art history and archeology at Washington University, said the work being created now will begin to reflect the time.

“It’s all happening at the same time as Black Lives Matter, and voting rights protests and all sorts of other highly politicized conflicts,” Dr. Kleutghen said. “Certainly in the time of a pandemic when everyone is learning differently, working with art differently and creating things in ways that previously there was no need to create works under such tightly restricted set of environments, everything is different.”

Dr. Kleutghen said art also serves as an agent of change in the present.

“Art doesn’t just reflect what is happening in the world, it actually has agency, and what I mean by that is it does active work in the world. So yes, people are creating objects, but those objects don’t exist in a vacuum,” Dr. Kleutghen said. “They go back into the world and reflect on people who see them and people who interact with them.”

Dr. Kleutghen said that reflecting on art of different cultures can bring people of all different backgrounds together through a common interest and is effective, especially during a digital age where constant online interaction occurs.

“Certainly the more you know about something, the less you are afraid of it,” Dr. Kleutghen said. “I still think on balance, particularly in the 21st century when everything has become increasingly digital, we have even more opportunities to come together through visual material, through works of art than ever before.”

REFLECTING ON THE PAST

While many in the community seek to create new artwork, others, such as Della Thompson, French teacher, have taken a fascination with reflecting on artists of the past.

This past fall saw the emergence of the “Beyond Van Gogh” immersive experience at the starry night pavilion at St. Louis Galleria. Since then, the pop-up has become a popular spot for teens and adults alike and will continue to do so until its end on Wednesday, March 30.

Thompson discovered the pop-up via Facebook and said she was “blown away.”

The pop-up uniquely displays Van Gogh’s work through interactive exhibits, projectors and floating canvas’ that depict Van Gogh’s and his family’s accounts of his life. The displays help guests gain perspective on his art style and his life, she said.

“The artwork that he does is easily understood in a lot of ways, but there are some things that are very subtle about it,” Thompson said. “The movement of the stars is very similar to the movement of liquids, and it’s interesting how even now we’re learning things about his artwork.”

Thompson said she enjoys Van Gogh’s art in part because it encapsulates both his art and the time period in which it was created.

“With artwork like his, we can see scenes of daily life. It gives us an idea of what it was like at the time,” Thompson said. “But also, it’s a way to communicate with people in the past. We can definitely feel the same feelings he was feeling when we look at his artwork.”

Thompson is not the only one who takes an interest in art of the past, as archeologist Dr. Liam Brady, said artwork of the past shows not only the emotion felt by the creators but also what life was like.

“For rock art, changes could be related to what was happening in the environment,” Dr. Brady said. “Other images reflect peoples’ belief systems. There are a great many things that rock art and other artifacts such as sculptures and decorated objects reflect.”

Dr. Brady said modern art functions similarly to the artwork of older times, and historians into the future will be able to derive similar meaning from the work being created now.

“I think the paintings on rock walls do what modern art does: it tells a story,” Dr. Brady said. “For Indigenous people, this could be a story about their identity, their belief systems, memories of hunting or family adventures.”

This story was originally published on Marquette Messenger on February 22, 2022.