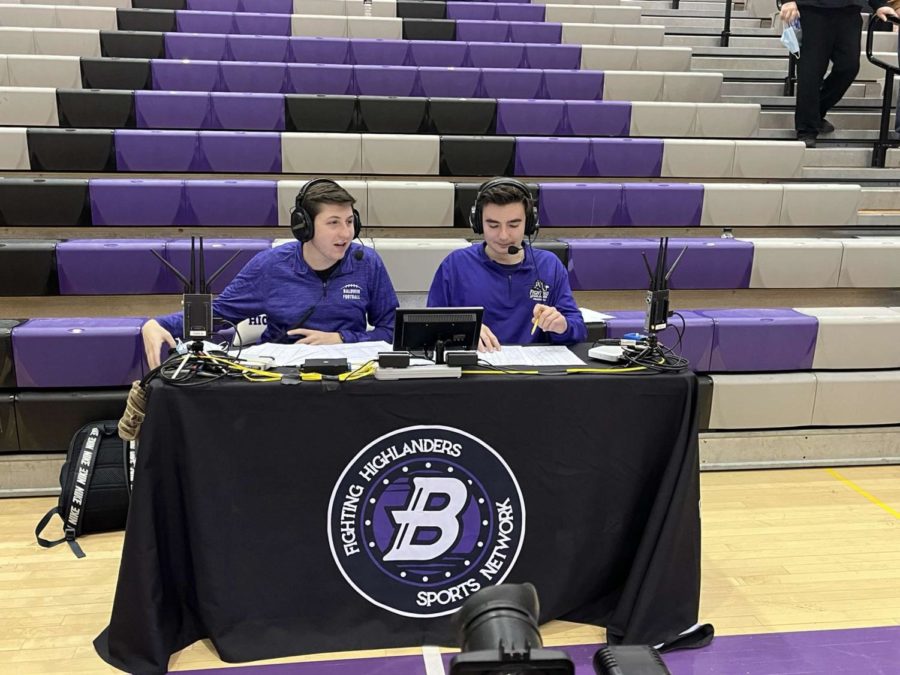 Baldwin Class of 2017 alum Jake Mysliwczyk has been interested in cameras and filming since he was little. Now he owns a business that brings live Baldwin football and basketball broadcasts to Highlander fans at no charge.

The Baldwin Fighting Highlander Sports Network has made watching Baldwin games much easier for many fans, with live streaming of football, boys basketball, and girls basketball games on YouTube. The broadcasts, now in their second year, are put together by Mysliwczyk’s company, JRM Video Production.

When he went to Baldwin, Mysliwczyk was part of the video production class and would stream some Baldwin football games. But the equipment used to broadcast games these days, which includes a company production trailer, is much more sophisticated.

“It was a much simpler setup with just two cameras,” he said. “Now we have a state of the art video production trailer we use to broadcast sports and events.”

After graduating from Baldwin, Mysliwczyk went to CCAC for a year while also doing an internship with the Pittsburgh City Paper and starting his own photography business.

“I started the photography business in the middle of my internship with the City Paper,” he said. “I started doing photo shoots for real estate work and having a booth at the Three Rivers Art Fest.”

After the internship ended, he was hired to be a staff photographer and videographer for the Pittsburgh Current newspaper. He worked there for two and a half years until it closed due to Covid, which gave him time to start the video production business.

JRM is run by Mysliwczyk along with his business partner, Ryan Milan, who graduated from Baldwin in 2017 and helps with the broadcasts.

At first, Mysliwczyk struggled to keep up with some of the issues that come with being a business owner.

“There’s no how-to guide and you have to make sure you do all the paperwork, like applying for a tax license and filling out a bunch of paperwork,” he said. “Thankfully, I had help from a family member who also owns a business.”

“Initially, it’s kind of scary,” he said. “But looking back, it’s really nice to see how everything worked out.”

The network originally had a pay-per-view setup for its Baldwin football broadcasts in 2020. This provided one form of revenue, but it limited their audience to only those who were willing to pay to watch.

Mysliwczyk wanted more people to watch their work, so he decided to make the broadcasts free for the 2021 season.

“With more views, the thought was to have local businesses advertise and then more people would see the advertisements,” he said. “It has certainly worked so far because we had around 23,000 people watch across all 10 games.”

JRM gets paid through the district, but does not charge nearly as much as other production companies would, he said, with the goal being to make additional revenue from advertising.

For each game, JRM has seven people working on the broadcast: two announcers, one main camera operator, two courtside and sideline camera operators, and two people in the production truck, choosing which camera angle should be broadcast at any one moment. They are all Baldwin graduates or current students.

The announcing crew consists of two Baldwin grads who are currently at Waynesburg University.

Baldwin Class of 2019 alum Austin Bechtold has wanted to do sports broadcasting since he was little, and he has his dad to thank for that.

“Growing up watching every Steelers game and going to at least 10 Pirates games a year with my dad really sparked my love for sports,” Bechtold said. “My dad’s love of sports has rubbed off on me and I would not be chasing this dream without his help and guidance.”

At Baldwin, he joined the Purbalite with his friends. Now he is a junior at Waynesburg, but he’s also back covering Baldwin sports.

“Interacting with the community at games, especially basketball, makes me excited to show up every game day and get to know everyone, parents and players both,” Bechtold said.

Bechtold’s advisor at Waynesburg University, Lanny Frattare, was a Pirates broadcaster for 33 years and has been an inspiration.

“He is a major influence on us,” he said. “I would not be where I am today without his leadership and knowledge.”

“I was very excited to announce Baldwin sports for a community that has done so much for me throughout the years,” he said. “This (career) has been my dream my entire life and to start by announcing Baldwin football and basketball – it is almost unbelievable to me that I have become almost the voice of the network.”

Bechtold needed to choose a new partner and felt that Tyler Zeman, a Baldwin friend from his days at the Purbalite, would fit the role the best. Zeman, a Class of 2020 alum currently in his sophomore year at Waynesburg, likes being a part of the network.

“I enjoy what I do as it doesn’t even feel like a job,” he said. “People may think it gets boring covering the same sports for a long stretch of time, but every game is always different, which keeps it interesting and fun to do,” Zeman said.

JRM Production is offering internships for current Baldwin students to help them gain broadcast experience and to provide the company with more staffing to help with broadcast events.

Sophomore basketball player Nathan Richards said streaming the team’s games is a great idea and has helped a lot of people.

“People who don’t have a chance to come watch us play get an opportunity to watch it through their phone or laptop,” he said. “It makes the game a lot more fun to watch.”

The network has big plans for the future after wrapping up its 2021-2022 sports season.

Bechtold would like to have more interviews along with stories on players across multiple sports. He also would like to cover other sports.

“Other sports would also be fun to draw attention towards,” Bechtold said. “It would really help the school along with the network grow.”

Mysliwczyk also has plans to expand the Baldwin coverage.

“We are very excited for the upcoming football season,” he said. “We are hoping to use things like aerial coverage and sideline reporting.”

Mysliwczyk, meanwhile, also is thinking about possibilities for further down the road.

“For the future, I hope we could expand our video company to offer this for even more local schools and colleges,” he said. “We would also like to become affiliated with ESPN3 to broadcast on television.”

This story was originally published on Purbalite on February 25, 2022.