War through the eyes of a teenager 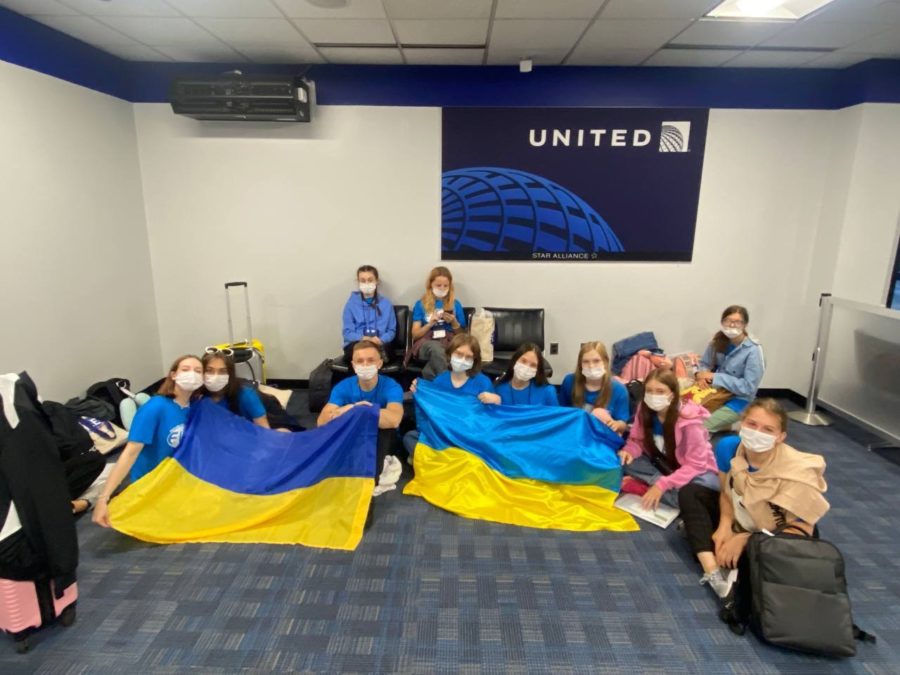 Narine (second left) and other Ukrainian foreign exchange students preparing for their journey to America.

Teenage years are supposed to be full of fun with friends and stressing over school, but this was not the reality of Narine Hrihorian, a foreign exchange student from Ukraine. While she has fun with her friends and tries to live her life as a normal teenager, she has been stressed over the uncertain future of her country.

Russian forces are on the Ukrainian border with, what seems to be, the intent to invade and seize control of Ukraine. This conflict may seem like a new thing that has only started a few months ago, but the crisis actually started back in 2014 and has escalated very quickly since then.

In 2014, Russia launched an attack on the Eastern areas of Ukraine and took control of the Crimean region. Though the conflict transitioned into a stalemate in late 2014, the violence between Russian and Ukrainian forces has resulted in more than 10,300 deaths and 24,000 injured. In October 2021, Russian forces began moving military equipment and troops toward the Ukrainian border. According to both satellite images and U.S. officials, there could be a Russian invasion of Ukraine in early 2022.

This ongoing crisis has displaced many people and has caused anxiety and fear amongst Ukrainian citizens. Narine Hrihorian, junior, is from Western Ukraine from the Zakarpattia province. Her town is close to the Hungarian border, the opposite side of the country from the Russian border. Hrihorian is the oldest of six children and lived with her mother and father before coming to the U.S. through the foreign exchange program. Even though she is so far away from her home country, she has anxiety about the state of her country.

“I’m a little worried because I don’t want [the invasion] to happen and if it happens then I won’t be there to help them,” said Hrihorian.

When the conflict started in 2014, life began to change for Ukrainians, like Hrihorian, all over the country. After Russia took control of the Crimean province, many of the people who lived there fled for a safer place. Hrihorian had new kids joining her class who spoke Russian. One of the boys from her school got enlisted in the army and was killed on the front lines; they named a street after him.

“The economy crashed because they had to buy supplies for the army. People are stressed and are scared,” said Hrihorian. “It impacts everyone, even if you weren’t in the area that got attacked. Men were getting enlisted and going to fight.”

Hrihorian is one of the many exchange students at Athens and in the greater Raleigh area. She lives with a host family and a fellow exchange student, 4,854 miles (7,812 km) away from her family and friends. She says that there is a lot of misinformation surrounding the crisis and people aren’t doing enough. She said that if other countries, such as the U.S., do not lend aid and take action then Ukraine may not be safe. She worries for her family and her friends and whether or not they will be safe, and she’s not the only one.

“I know Biden is taking action, and I appreciate that. I wish they had started earlier. I am sure that they will help and I hope they do. I hope they help us on the border,” said Hrihorian, “I don’t want to panic, I just want people to know what is happening and spread awareness. Ukraine is an awesome country and I don’t want the world to know about us during a hard time.”

If Russia invades Ukraine and tries to assume control of the country, the majority of the Ukrainian people would not be able to leave. The result would be millions of people becoming displaced, Narine’s family included. As the oldest of six siblings, she worries about what could happen to her family.

“We would love to leave but we don’t know where we would go. I’m one of six children, I’m the oldest, there are five [other] kids [in my family] so it would be hard for my mum on her own,” said Hrihorian, “It’s a lot of money and a lot of hustle. It would be really hard and there would be a lot of obstacles.”

One of the issues surrounding the conflict is the prevalent lack of public knowledge on the issue, Hrihorian urges people to check official sources and to stay updated. For those who know any foreign exchange students from Ukraine, Narine suggests asking how they are doing as this is a complicated time for those from Ukraine.

For Narine, as the conflict has escalated and continues to get worse, she fears for the worst but she hopes for the best. She likes that other countries, like the U.S., are lending a hand, but wishes that the US and other allies had started to help sooner.

“A lot of people just say that they may not invade, and some say it’s a political war. But I think that if other countries don’t help or take action, we may not be safe. It will impact other countries too. They should take it very seriously,” said Hrihorian, “I’m afraid for my family, even though they live on the other side of Ukraine.”

This story was originally published on Athens Oracle on February 22, 2022.