Warning: This story contains discussion of sexual assault, abuse, and other sensitive topics. 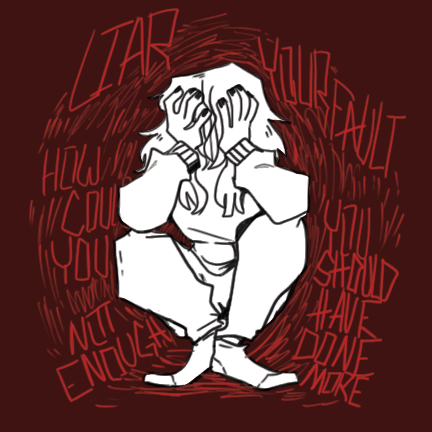 Victim's can feel guilt from many things after sexual assault, rape, or abuse. They start to question if it was their fault or not.

Jess* wanted justice after what happened to her. She looked for help from the legal system, but could not find it. She had pictures of bruises and marks on her body. Jess* was told by the legal system that her evidence was not enough to press charges. Now, her accused assaulter walks free. Even though it was not her fault, she started to feel guilty for what happened to her.

People know about sexual assault and rape. They know it is a horrible thing that can happen to people. But what is not known is how long the effects last.

Victims’ guilt is an emotion that can be described as a victim feeling like it is their own fault after being harmed in some way. Most often, victims’ guilt is associated with instances of assault, abuse, or rape. They think: Was it my fault? Was it how I dressed? Am I making this up? Did I make them do this?

The victims can feel at fault for many reasons: victim-blaming, the legal system, acquaintances gossiping, and the school system being just a few.

“He gaslighted me into thinking that he did nothing wrong,” freshman Jane* said. “He told me he only hugged me and claimed he did not do anything, but then he proceeded to blame me for how I dressed.”

What Jane* described is victim-blaming. Victim blaming is when the assaulter or acquaintances blame the victim for what has happened to them. The victim could be blamed because of how he or she dressed, moved, talked, or for simply being there in the first place.

“I was sexually assaulted by someone at my high school and the school was informed. They were supposed to keep me out of classes with him, which they did for the first few months. Sure enough, the next semester rolls around and I have two classes with him,” sophomore Ashley* said.

Administration can assure the victim that they will keep them safe and out of the presence of the assaulter, but schools can forget while the victim has not yet, making the victims feel like the school is not supportive of them anymore.

The legal system is another main reason as to why people feel like an incident was their fault. It can be very misleading at times, according to junior Emma*

These are only a couple examples of how victims can get blamed. Even though most victims’ guilt comes from outside sources, sometimes it can develop internally.

“After it happened, all I could think about was that it was my fault. I thought it could be the way I dressed or how I talked,” Jane* said.

Victims’ guilt is more common than most people think because not many people speak up about it. This also leads to victims struggling to get over the guilt.

“It took me a year to feel okay again,” Julia*, a sophomore, said. “It was a hard fight but people around me and various different sources helped me through it.”

Mental health counselor James Barlett believes that society can rush a victim to get over it and just go talk to someone.

“I think it is a very complicated situation,” Bartlett said. “Everyone says, ‘just to go talk to someone,’ and it is easy to feel pressured to do that even when you are not ready. Obviously talking to someone will be important, but a victim should not be rushed when they are not ready.”

Nobody is responsible for the assault imposed onto them. If you are a victim who is feeling guilt because of what happened to you, there are places that can help. There are various hotlines and numbers you can text to get tips or just have someone to talk to. Victims’ guilt is more common than people think.

This story was originally published on Hagerty Journalism Today on February 28, 2022.