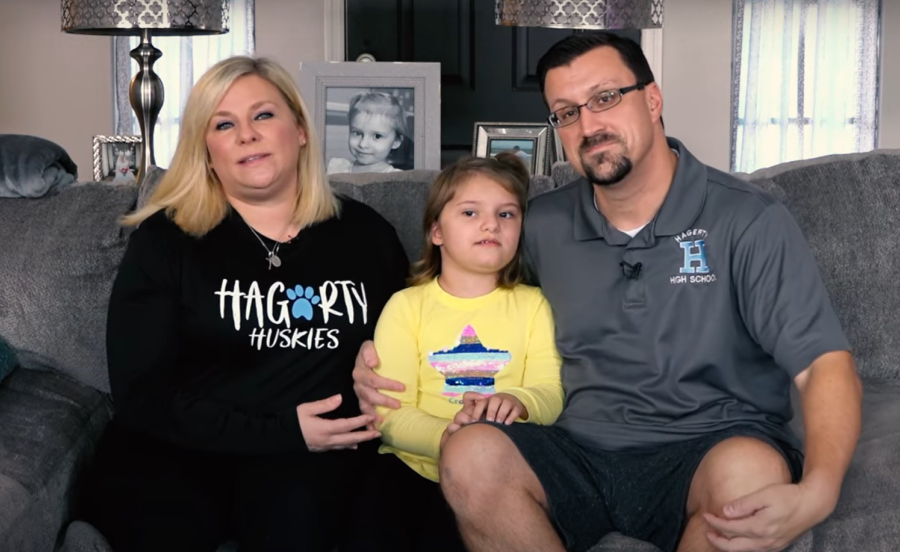 The accident happened the evening of Jan. 4, 2019. A tanker truck pulled out in front of the family’s truck, a mistake that crushed assistant principal Angel Rocha’s family under a water tank and left her parents and daughter in critical condition. Her mom underwent three full back replacements and her daughter Zoey ended up with a brain injury on her right frontal lobe, which affected her left arm and leg due to its severity.

“When you have your first child and you’ve gone through your life without anything traumatic like that happening, your first reaction is shock and then just being completely overwhelmed and sad, and you feel alone,” Rocha said.

To help Rocha and her family, English teacher Lindsey Jackson set up a GoFundMe account that raised over $16,000. An additional $10,800 was raised during DARE Week (in which teachers complete dares given to them by students) in 2019.

“It was a lot of the faculty and the kind students who really rally during DARE Week. They raised money for us and that was just so special, that students cared,” Rocha said.

When Rocha was at the hospital with her daughter, she noticed something that sparked her idea to help other families.

“One thing I noticed is how many people were by themselves and how many didn’t have the things that I had. People had sent me blankets, snacks and gift cards so I could buy food and just things you don’t think about that are needed,” Rocha said. “They didn’t have anything like that, they didn’t have someone to check on them and that’s where that seed was planted.”

The idea sat in the back of Rocha’s mind. She had experienced the financial and emotional stress brought by the hospital stay, spending two months for physical rehab and urgent care. Now, three years later, she has started a project to help families during long stays at the hospital.

After a conversation with Kristi Draus, Rocha decided to team up with Hagerty’s PTSA. Not long after, Rocha and PTSA provided lists of supplies, links to Amazon wishlists and a video to bring awareness to the project.

The goal for Zoey’s Basket is to make 100 baskets full of supplies such as chargers, food gift cards and hygienic products for the families by Mar. 29. As of March 2, Rocha has received enough supplies for 10 baskets. Some products which they are in need of are food gift cards, phone chargers, battery packs, tote bags and towels. A video full of supply lists can be found in the principal’s weekly updates: Feb. 25 along with an Amazon wish list that delivers to the school.  These baskets will be transported to the Ronald McDonald House and Arnold Palmer Hospital after being assembled.

“Whatever people are willing to give are welcome. It doesn’t matter if it’s something we have 20 items of. We are very thankful for anything,” Rocha said.

A basket assembly and distribution event is planned for early April. Rocha wants to let students and the community help these families as much as they helped her three years ago and show them the difference this can make.

Rocha’s dad has healed from his neck injury, and her mom has recovered progressively following her back transplants. Though Zoey is in stable condition, she will remain with physical and learning impairments for the rest of her life.

“I don’t know how I would have gotten through that time without the support of my coworkers checking on me, sending me notes of encouragement, and financial support,” Rocha said. “It was extraordinary to see young people be so giving and so loving and it kind of gives you a hope that isn’t normal in a situation like that. I want other families to feel that way.”

This story was originally published on Hagerty Journalism Today on March 6, 2022.