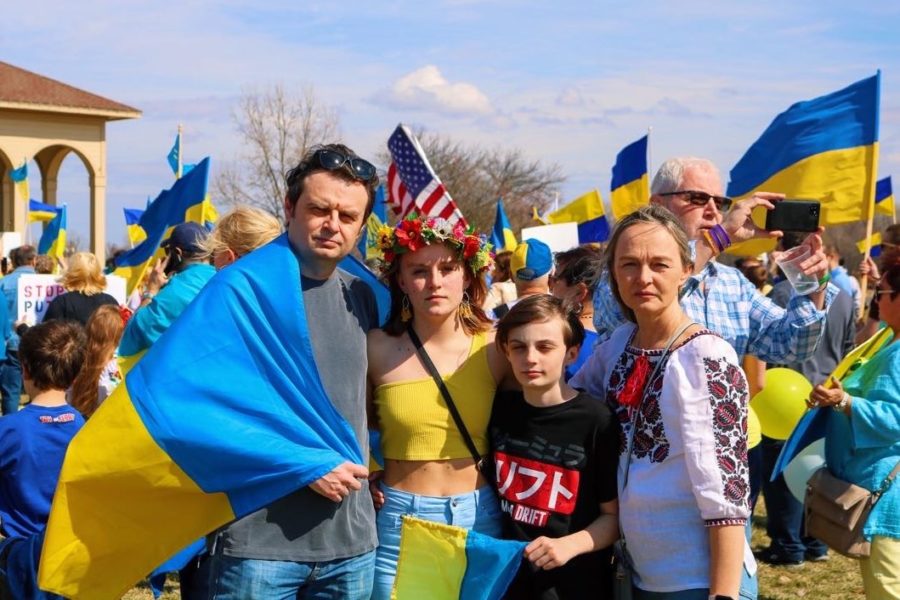 Class of 2021 graduate Sophie Yereshchenko stands with her family at a rally in St. Charles on March 5, 2022 in support of their family and friends in Ukraine. "Fox News and NBC were there and they asked us for interviews and I think it was just too emotional. We couldn’t get through really any conversation without crying and we were all so worried and continue to worry about the safety of our friends and family. I’m more sad than I was when I declined the [Fox News and NBC] interviews but I’m really angry. I’m angry that this is happening and I’m at a point where I’ll do anything to make it better. I think part of that is just speaking up and making everyone around the world aware of what’s going on, asking our government to be doing a little bit more," Yereshchenko said.

“I called her as soon as I saw her text. She said there were bombings in Kharkov which is where my dad went to University and a lot of their close friends are and a few distant relatives. My mom was crying and I was just in disbelief. From that moment on, there hasn’t been a second where I haven’t been thinking about it,” Yereshchenko said.

But for Yereshchenko’s family, the anxiety surrounding the potential for war in Ukraine began much earlier.

“I have been following what’s been going on since 2014 when the war started in Crimea, so when I was in 7th Grade. Since then, it’s been a conversation I’ve heard my parents talking about or talking to me about it. Obviously, it was a very different war then than it is now. It was very secluded in that one area and now it’s an attack on the entirety of Ukraine so it’s much more intense now,” Yereshchenko said. “On Feb. 22, my mom stopped by in the middle of work just fully convinced that this was going to be war, this was going to be real. Since then, [my family dynamic] shifted.”

Since that day, the family has been apprehensively waiting for the next bit of news.

“It’s difficult for us to even imagine because we’re at such a distance. My parents grew up in Ukraine, they moved here about 17 years ago and I’ve never seen my house the way it is. It’s like I walk in and it’s just this gloom; I’ve never seen both my parents cry so much. We call each other and our conversations no longer start with ‘hey, how are you?’ or ‘how’s your day going?’, ‘how was work?’; it’s just as soon as I wake up and haven’t had time to read the news yet, I’ll ask ‘what’s new?’ and they just know it’s about the war. We haven’t talked about anything else,” Yereshchenko said.

Since the majority of their family and many of their close friends live in Ukraine, Yereshchenko’s family has found it difficult to focus on anything other than the safety of those still there.

“I think my entire family has been distracted, we’re all kind of mortified, it’s hard for us to focus on anything else or think about anything else. I came home this weekend and the news is on at [my parents’] house 24/7. I feel like I’m just constantly re-updating The New York Times, reading every single article and news event. It’s kind of like [when] you can’t look away from a car accident,” she said.

As soon as the war started, Yereshchenko began posting about it and writing to the local government on behalf of Ukraine, telling her story.

“My family is my entire life. Anyone that knows me knows that I really revolve around my family and I’m very proud of where I come from, it’s never been something I’ve hidden,” she said. “Until 2016, all of my family outside of my immediate family lived there. My parents and my sister were born in Ukraine. I’ve been back twice primarily to visit family and for the last year, I’ve been telling my parents that I want to go to Ukraine so bad because I now understand so much more than I did. Ukraine is a really beautiful place.”

Yereshchenko’s aunt and uncle live in Poltava and own a pharmacy there.

“They decided to leave after the nuclear explosion happened. That was their last straw. They decided one day in advance to leave, the next morning they just left everything. They slept at a school, they’ve been sleeping with friends and stuff but they’re trying to make it to Poland and then hopefully fly up here,” she said. “I have a cousin who gave birth on the fourth day of the war. The day after she gave birth, she had to go to a bomb shelter.”

Even as Yereshchenko’s family and friends brave the 30-degree weather without windows, electricity or water, they have still found ways to help those around them.

“It started with our family friends, two different groups started going to the grocery store and getting diapers or formula or groceries and delivering it to families. They started a Facebook group chat and people would just comment like ‘my baby hasn’t had formula in two days, please bring us some’ or [asking for] food. One of our friends, Vlad, he’s kind of the main one [running it], his wife has been baking bread all day and delivering food,” she said.

Yereshchenko and her sister decided to help out this cause by raising money and donating it to help the families in Ukraine. However, they didn’t expect the amount of support they would receive. The majority of the funding has gone to help families in Kharkov but has also provided some support to those in Poltava. They also donated to a hospital and orphanage.

“I expected to get maybe $500 because I’m posting to college students and high school students that can barely afford a Starbucks coffee and 12 hours in, we had sent out $4,000 to Ukraine. It’s going to our personal Venmo accounts so it’s completely built on trust. I got donations from people I have never in my life talked to and I don’t even know what state or country they live in, and they trust that that money will go there. If there’s one thing that came out of this war is there’s been a lot of uniting. I think people have been really incredible. [The organization is] only running off of our donations,” Yereshchenko said.

After hearing Yereshchenko’s story and her fund, theatre teacher Natasha Fischer chose to use the upcoming Undefined improv show to raise money for Yereshchenko’s cause.

“Every show we try to do something for some group that needs assistance in some sort of way. We help to bring awareness. Theatre is not just about being able to perform and be funny, it’s about what we can do for our community and bring people together. We had this show coming up, Russia invaded Ukraine, if you watch the news there’s a lot of devastation and people are losing homes and lives. This is what we wanted to focus our show on because this is what needs the most support right now,” Fischer said. “Sophie is a member of this community, she is a student of Lafayette, no matter what year she graduated. When I found out that she was from Ukraine and went to Lafayette I wanted to reach out to her because we want to give back to her since this is her home.”

Students performing in the show are looking forward to bringing awareness to those in need and hope it encourages members of the community to take initiative in helping.

Yereshchenko will be attending the 7 p.m. show to speak and the team will be promoting the fund at both the 3:45 p.m. and 7 p.m. shows on March 11.

After the war passes, Yereshchenko hopes that she can tell the story of a country that overcame.

“I want as much peace as possible, I want to save as many lives as possible, I want Ukraine to remain intact,” she said. “My sister is pregnant, she’s about six months in, and what I want more than ever is for [the baby] to grow up and I can’t wait to tell her where she’s from. I can’t fathom telling her ‘you’re from a country that doesn’t exist’. I can’t wait to tell her ‘you are Ukrainian’ and tell her this is what happened, this is how we won.”

This story was originally published on The Lancer Feed on March 10, 2022.