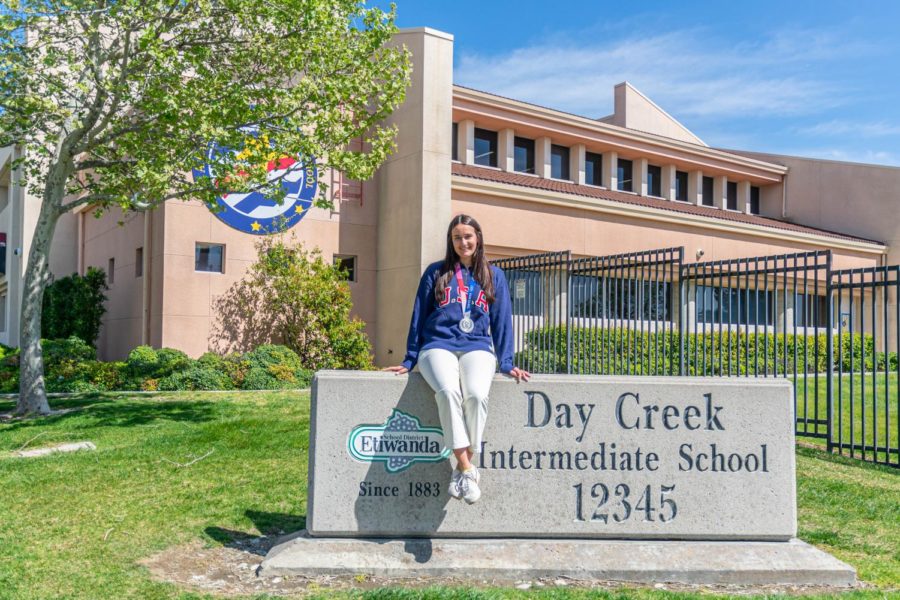 Imagine getting the email of a lifetime. You are going to the Olympics. Then during a softball game, tragedy strikes. You tore your ACL, a couple of months before you are planning to take the biggest athletic stage of your life. This was the grim reality that Delaney Spaulding faced in February, 2020. However, due to Covid, the Summer Olympics was postponed to 2021 giving Spaulding time to recover.  In response to the outbreak, hospitals were not performing elective surgeries, so she had to wait until May to repair her ligament. Rehabilitation took 14 months, allowing for a return to the field in July of 2021. Her recovery was daunting, both physically and mentally, yet she looked to her faith to guide her through the process.

“It was very hard and challenging. The pain was pretty bad, but I understood that pain is temporary. The biggest part was mentally dealing with it, day after day. When I was going to the next step, running around the bases, the trust factor was really hard for me, believing that [my knee] could do the same things that it did before I tore my ACL. That was very scary and that was a hurdle I had to get over. Tearing my ACL and the time that I did it, where my Olympic dreams could have been taken away from me, I really developed my faith,” Delaney said.

Former Day Creek Coyote student Delaney Lyn Spaulding was born on May 9, 1995, in Rancho Cucamonga, California. She began training for softball at the age of 8. Her childhood and teenage years centered around two things: spending time with loved ones and practicing on a softball field.

“[My teenage years] were a lot of fun. I met my closest friends playing softball, and they are still my best friends today. I went to Etiwanda High School where all of my sisters went and played sports. I loved living out my family tradition of playing softball at Etiwanda, and then I went on to play at UCLA as well,” she said.

Delaney was accepted at UCLA as of her good grades, SAT scores, and skills on the softball field. It was the perfect school for her because of the university’s strong reputation for academic and sports success. Location allowed for her family to be there every step of the way.

“I’m so blessed that I went to UCLA because I had a family member in the stands at every single one of the games. We live an hour away from LA, [so] they were able to be at every game in my career. It was the best feeling, looking up in the stands and waving at them. My success on the field is a family success. When I got named to the Olympic team that was truly a family success because I know how much time, money, and energy my parents put into it, and my sisters supported me emotionally and physically the entire time,” Delaney said.

No matter the challenges she faced or acclaim she gained, family was central to her story. Her number and field position both had connections to the siblings.

“My eldest sister is 10 years older than me. My parents brought me everywhere with her to watch her play. She wore [the number] 99 at Etiwanda and 99 in college. She played shortstop growing up. So, because of her, I wear 99 and play shortstop,” Spaulding said.

Spaulding is not the only one in her family to play the sport; each of her sisters played too. Throughout her youth, she had been watching softball and started to develop the Olympic dream in 2016 after softball was added back into the Olympics.

“When I was growing up, I would watch the Olympics. [However,] softball got taken out when I was young and it didn’t get back into the Olympics until 2016. Around that time is probably when the Olympic dream kind of presented itself again. That is when I started aspiring to be an Olympian, working and training hard to make the final roster, ” Spaulding said.

Delaney and her teammates were driven to compete for the US in the Olympics, but when the pandemic struck, the competitive world was turned upside down. Preparation during Covid was especially hard as gyms and training facilities quickly shuttered.

“When [Covid] first hit, and they postponed the Olympics, we thought it was going to get canceled. We were grateful for [the sport’s return] because softball hadn’t been in the Olympics for 12 years. However, training during Covid was difficult. We were on our own,” Spaulding said.

The pandemic introduced challenging protocols that athletes had to follow to minimize interaction within the Olympic Bubble. One of those restrictions prevented her family from attending, yet it didn’t stop them from cheering her on from home in Rancho Cucamonga.

“The Olympics during the pandemic was not as weird as I thought. The only unfortunate circumstance was my family not being able to watch me play in person. But it was still a great environment,” Delaney said.

After Team USA won silver, officials prepared the medal stand and medals. Spaulding and her teammates changed into their medal stand outfits provided by Nike. She was overwhelmed to represent her home country.

“[The Olympic medal stand] was really cool. Right after the game was over, we were celebrating or crying. In the background, they were getting to work, cleaning the field, putting up the medal stand, and bringing out the medals. There was a whole order that we had to follow to get onto the medal stand. They put our silver medals on us and announced us one by one, before [we did the Japanese] National Anthem. Going to the Olympic games – not just winning a silver medal – was an honor to represent our country, the softball community, my family, Rancho Cucamonga, and the Olympic Games. I take a lot of pride in that,” Delaney said.

Despite her CIF (California Interscholastic Federation) success at Etiwanda High School and three trips with UCLA to the NCAA Women’s College World Series, the Olympics were a surreal experience.

“Playing in the Olympics is unlike anything I have ever done. Nothing compares to it. It took a lot of hard work leading up to the Olympic Games, and it was fun to see it all pay off!” Delaney said.

After the Games, Delaney has been giving back to the community by training the next generation of girls. She recognizes her responsibility as a role model for other girls because of those who provided support through her years of development.

“I am doing private coaching and [team] coaching locally here in Rancho. I have found a new joy in coaching; I love it. I think that when I grew up, I had those female leaders to look up to. I learned a ton through them. I got to the age where I [realized I] could give back to help young girls develop [not only] softball skills but also life skills – being able to communicate with someone older than them who has kind of been there, done that. I have been successful in this game and I want to be able to give that to them,” Delaney said.

Spaulding’s days are currently spent back home with her loved ones. She is still processing her Olympics success and the team’s silver medal. Nevertheless, she believes that her career is not over.

“I’m not totally apart from softball, but I am not training yet. I will start pretty soon because I’m going to start playing in June. Right now, I am just having fun with my nieces and nephews, family, and friends. I am taking time to relax and process. 2021 was a really huge year for me, [but] I’m not done with my career,” Spaulding said.

Delaney hopes to return to the Olympics in 2028, which will be held near home in Los Angeles. She loves softball and knows that her story isn’t over.

“In five years, I hope that I’m still playing [softball]. I have a dream to go to the 2028 Olympics. We are hoping and praying that softball will be in the LA Olympics. I hope that I will be at the Olympics again. [In the years that follow] I hope I am still around the game, coaching and putting all my effort into developing young girls to really love this [sport],” Delaney said.

Spaulding cherishes her experience and recognizes that it’s her time to give back to girls in her hometown, whether it’s on or off the field.

“Softball has given me way more skills than just softball. It has given me a ton of life skills and I want to portray that to these young girls,” Spaulding said.

This story was originally published on The Day Creek Howl on March 15, 2022.