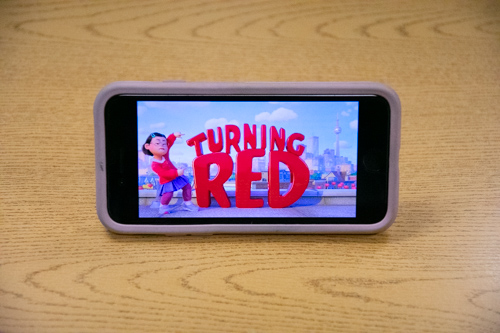 Turning Red is an overall enjoyable movie, and came out on March 11th on Disney+.

Pixar’s new 2022 film Turning Red has brought audiences a myriad of emotions. This coming-of-age film directed by Domee Shi was cast with actors Rosalie Chang, Maitreyi Ramakrishnan, Sandra Oh, Addie Chandler, and Ava Morse. The film differs from past Pixar films by not premiering in theaters, premiering on Disney+ on March 11.

The setting occurs in Toronto, Canada in 2002. Protagonist Melin Lee (voiced by Rosalie Chang) recently turned 13 and decides she will do what she wants when she wants to. But the rebellion ends when she gets home and has to obey her mother’s every order. Her mother’s actions mortified Melin, which led to the ultimate change.

As Melin woke up one morning, she noticed something extraordinary: she had turned into a red panda. Her mother noticed this and started telling her the truth about her family, that when young girls of the Lee family come of age, strong emotions turn children into red pandas. While Melin tries to handle this challenge and attempts to fit in at school, she finally realizes that the red panda gene was not a curse but a blessing.

The movie follows a familiar pattern that’s worked well for Pixar: create a fictional plot involving different cultures and ideas of inclusiveness. Luca, for example, created mythological sea monsters in an Italian setting. Encanto made a magical family of Colombian heritage. And finally, in Turning Red, Pixar fabricated a shape-shifting girl with an Asian-Canadian background, shining a light on Asian households and their characteristics. Who knows what they’ll do next?

However, Turning Red reveals a more mature tone than past Pixar movies. The film portrays the process of a young girl’s maturation, addressing relative teen topics that viewers had yet to see in prior Pixar movies. Could this be the start of something new from Pixar?

In the past, Pixar has veered away from mature topics, instead of focusing on topics that are safely fictional. While Turning Red does center on the imaginative, it also reflects modern teen topics like crushes and rebellion. Pixar may be growing up.

While the storyline reflects a more mature plot, it retains its humor. Viewers will laugh at Melin and her friends who are die-hard fans of a pop band. These interactions will definitely leave the audience chuckling.

Overall, Turning Red is enjoyable. With the comical characters, maturity, and the coming-of-age theme, this film has it all. It definitely deserves a 10/10.

This story was originally published on The Day Creek Howl on April 6, 2022.